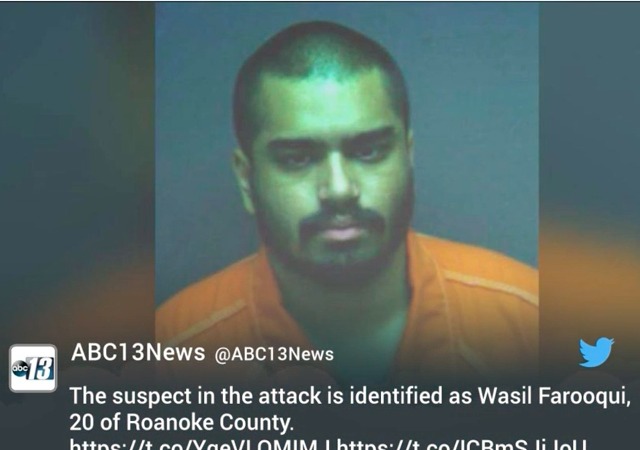 The FBI has decided to investigate a stabbing in Virginia as a possible terrorist attack after the man allegedly yelled “Allah Akbar.” Wasil Farooqui, 20, stabbed two people at an apartment complex on Saturday night. Both people survived.

Witnesses told the police Farooqui yelled “Allah Akbar” as he attacked them.

“The FBI is working with the Roanoke County Police Department following the incident that occurred on Saturday evening,” said Adam Lee, special agent in charge of the FBI’s Richmond Division.

“While I cannot discuss details of the investigation at this time, I do want to reassure the community that we are working to determine the nature of the incident,” Lee said.

Officials told ABC News Farooqui “may have been trying to behead the male victim, who was likely picked at random.”

Other sources also told ABC News that he went to Turkey last year “and may have tried to sneak into Syria, where ISIS is recruiting and inspiring sympathizers from across the world.”

They arrested him at the same hospital that was treating the victims for treatment of his own injuries. He matched the suspect description and they promptly arrested him. Another source said they do not not know if he “is an American citizen.”

Google is telling me that “Allah Akbar!” translates to “my motives are unclear!”

Indeed! I read it meant “I am randomly attacking you for random reasons.”

I’ll be he was yelling “Where’s the snack bar” and the people around him didn’t know where it was so he stabbed them. islam is the religion of peace in case you have forgotten.

I blame Chick-Fil-a for his radicalization.

As we all know from the MSM’s extensive coverage of Chick-Fil-a’s out of control terroristic and hateful late owner Truett Cathy, CFA is a right wing religious cult claiming to have invented the chicken sandwich with numerous cell sites in the Roanoke area and across the nation that spread their hateful message with incredibly good food and service plus treat their employees well too.

Obviously, the religion of peace, Islam, has nothing to do with this crime since they have never been investigated as heavily as CFA. So, CFA must be to blame.

CFS is just one letter away from CSA and we all know the southern states in 1860 are causing the murders of countless unarmed Americans. Besides chicken and watermelons are rassist! 🙂

The waffle fries are to die for.

The investigation is being headed by Capt. Obvious who you might remember investigated Vince Foster’s suicide and the Heaven’s Gate murder. Ali Snackbar back at ya bub!

I subscribe to the Roanoke Times and read it every day. I do not recall seeing anything about this in the paper.

Probably only printed in the Tinker’s Cliff edition.

PC seems to be infecting the DA’s office. Stabbing two people and attempting to behead one of them only merits “malicious wounding” and not “attempted murder”?