Authorities had their eyes on the suspect for over a year. 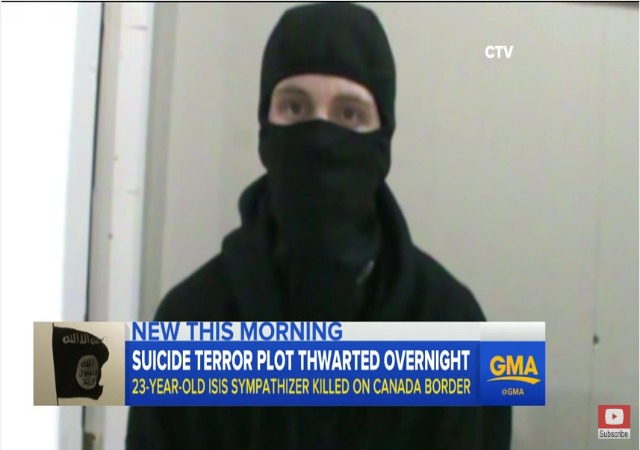 The Royal Canadian Mounted Police (RCMP) stopped a massive suicide attack on Thursday with help from the FBI. ISIS supporter Aaron Driver, 24, died during a confrontation with the police in a small Ontario town:

Royal Canadian Mounted Police Commander Jennifer Strachan said Driver was intercepted by police as he entered a taxi with a backpack and said Driver detonated an explosive device, injuring himself and the taxi driver, before police shot at him. It was unclear whether Driver died as a result of the shrapnel or a police bullet.

Driver wanted to take the explosive device in a public area and detonate it. They found a “martyrdom video” he taped where he made his declaration to perform the terrorist attack:

In the video, aired during a news conference in Ottawa, a masked Driver is seen railing against western “enemies of Islam” and warning that the only solution would be the “spilling of your blood.”

Authorities already knew about Driver’s sympathies towards terrorists and banned him “from associating with Islamic State” sympathizers in the United States and Britain:

Driver had been under the spotlight for at least a year, as authorities believed he was a threat because he could help terror groups. He gave a media interview where he expressed support for prior terror attacks in Canada and expressed interest in travelling to join the Islamic State.

Get this. The Mounties first picked up Driver in 2015 and they “applied for the peace bond, which can impose limits on Driver’s activities, alleging in provincial court documents that investigators believed he might help with terrorist group activities.” He had to wear a GPS tracking device, could not get on the internet, communicate with sympathizers or members, or wear anything associated with ISIS.

But the Manitoba Association of Rights and Liberties threw a fit about his conditions, which caused the government to lift the punishment. They took off the tracker, but still banned him from the internet and having a cellphone.

Thankfully, though, the police stopped Driver in time:

The FBI had learned that a man had indicated he planned to carry out a rush-hour attack in a major Canadian city, according to Reuters news agency.

“The RCMP received credible information of a potential terrorist threat,” an RCMP statement said earlier Wednesday. “A suspect was identified and the proper course of action has been taken to ensure that there is no danger to the public’s safety.”

Canada’s Prime Minister of Public Safety Ralph Goodale said this incident shows the country needs “to step up its counter-radicalization efforts.” He continued:

“The government of Canada has to get far more proactive on the whole issue of outreach, community engagement, counter-radicalization, determining how and in what means the right positive constructive influences can be brought to bear to change what otherwise would be dangerous behaviour,” said Goodale.

He stressed that law enforcement and intelligence officials are always taking “appropriate steps to keep Canadians safe” and that the national terrorism threat level for Canada remains at “medium,” where it has stood since the fall of 2014.

The problem is that Driver was as Canadian as they come. Born and raised there, from all I’ve seen.

I hope they clean the cab before they put it back in service.