Dump-Trump Mika Tells Republicans: Get Your Heads ‘Out of Something’

Dump-Trump Mika Tells Republicans: Get Your Heads ‘Out of Something’ 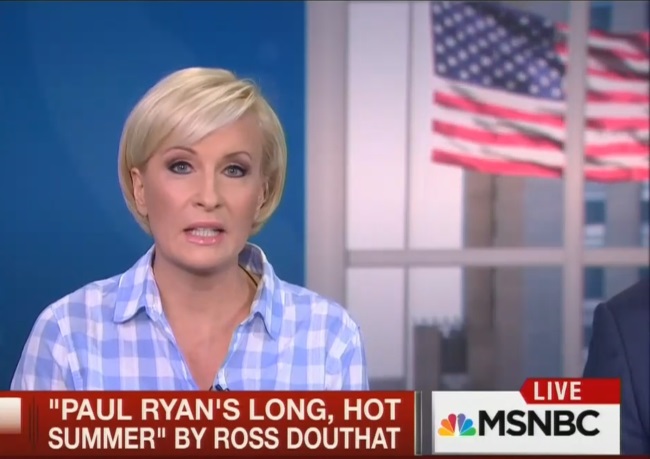 The liberal establishment has yet to recover from the shock to its delicate sensibilities caused when Donald Trump spoke of Megyn Kelly having blood coming from her “wherever.” But will anyone blink a whatever now that MSM member Mika Brzezinski has told Republicans that they need to “get their heads out of . . . something?” The ever-diplomatic Willie Geist suggested Mika had “sand” in mind, but it seemed clear she was referring to something else.

On today’s Morning Joe, Mika repeatedly made the case that the Republican establishment should dump Trump. Analogizing the Trump candidacy to a car that has burst into flames, Mika called Republicans “wussies” for refusing to get out of it.

KATTY KAY: I interviewed Bill Cohen, President Clinton’s Republican defense secretary the other day. He said to me that he wouldn’t be able to vote for Donald Trump in November either. And I wouldn’t be surprised if after Labor Day you had a slew of senior foreign policy types coming out on the Republican side saying we just can’t vote for Donald Trump. Now the next step would be if they said they were actually, Meg Whitman style, going to support Hillary Clinton. I don’t know if they’ll go that far. But that’s where you’re going to get the first big fracture in the party and people coming out and saying —

MIKA BRZEZINSKI: I think some Republican leaders need to get their heads out of something. Here’s what —

MIKA: I guess I’m just incredibly naive. Cause I figure if you’re driving a car you really like and you just love that car and you’re driving it, or if you think you kind of like it or maybe you just have to drive the car. And then the car like bursts into flames and you’re driving a car that’s in flames, my choice is to get out of that car. It seems pretty simple. But I guess people like driving cars that are on fire. That could drive our country into the ground.

MICHAEL STEELE: Just real quick, you really think that the Republican party is just going to cede this election to Hillary Clinton? They’re just going to say because of everything you just described, well the car’s on fire, we don’t like Donald Trump, he’s God knows what, we’re just going to lay down and not —

The Democrats once replaced Vice-Presidential candidate Thomas Eagleton with Sargent Shriver. Nixon won in a landslide.

Why would the Republicans want to take advice from Democrat Mika?

Since the Democrat race was rigged, why not replace Hillary with Bernie?

Eagleton. That harkens back to a time where the media would actually attack a Democrat. That will not happen today.

Whyare you so obsessed with joe Scarborough.
For about ten years I listened to Rush everyday. I’ve never once heard Scarborough except on these pages.

You might as well report on what the View says now.

Maybe she needs to get HER head out of……something.

She is scared stiff that the Democratic candidate is going to lose, once the public gets a good eyeful of this guy.

It has been highly instructive for me to dig up an original video that has given somebody the vapors, park my butt, and watch it.

Nothing to see here just move along.

Placing Americans first evokes an acute phobic response from both sides of the room and aisle.

I don’t like Trump very much. To be honest, not even a little.

But this far into the race, I think, it’s kind of silly to even consider the possibility of convincing him to drop.
He will not drop. He’s the one chosen by the majority of Republican voters, so we are stuck with him. Attacking him only helps Hitlary.

If there was a viable independent candidate, I would not vote for Trump, but the sad truth is that at this point it’s either Trump or Hillary. I know for sure that I don’t want Hillary, so …

It’s like driving in a HumVee all buttoned up and taking shots and the jihadis surrounding you are telling you your car is on fire and you should get out now. Honest. We wouldn’t lie to you,would we?

I like to see liberals so concerned for the Republican party. Of course the party they want to see in charge is the one that works with them on their liberal agenda which is killing this country.

At long last the Democrats (the original Tories) will achieve their goal of overturning the revolution and reinstituting the monarchy with Queen Hillary the First.

And if Hillary is elected you will see some real revolt. Not these sissies in the BLM movement. Not even the big bad New Black Panthers.

Hillary gets elected, a whole lot of people will understand that they’re doomed and they have nothing more to lose.

If is troika of republican/democrat/msm are this upset, Trump must be doing something right.

Mika Brzezinski should have used the euphuism employed by
Rob Grant, the principal writer of Red Dwarf, i.e. “place it where only Custom’s agents fear to probe.”

Dancing on the grave of the GOP and calling Republicans cowards. Must be good to be Mika.

Donald is a terrible choice, but MY principles won’t let me vote for any other party that will only help Hillary.

The RNC saw what they wanted to see in Trump, it’s that simple. They desperately wanted a moderate with the ability to win. Trump sold himself well and was able to hand-wave over his deficiencies during the primaries with his “let’s build a wall” rhetoric. The RNC ignored lack of loyalty to the party, his inability to articulate policy on a range of issues, and his obvious temperament / character issues.

Since Trump is a one issue candidate (immigration), all the Democrats had to do was to find one decent who would be kept out by Trump’s proposed immigration policies, and that’s exactly what they did. I would also expect Hillary to co-opt the issue to some extent. Now that the email scandal is basically over thanks to her FBI / AG connections, it’s pretty much smooth sailing for Hillary.

Let Trump be Trump and call-out the elephant in the room.

Does anyone else think this might be ground-preparation for Hillary to drop out?

So this putz thinks we should nominate candidates she finds palatable – so she can not vote for them.

This b.s. only works on the crying boehners.

Trump won playing by their own rigged rules designed to stop him rather than let the people choose. The establishment should either get behind him or resign their office. They are in no position to dump anybody at this point, suck it up and push him onto victory.

I thought her thighness wanted to face Trump in November, so why the concern Mika?

She tried her hardest to get him (Cole)to smear Trump and defended Crooked Hillary when necessary.

What a phony Mika!

No we won’t. Most of the ‘acceptable’ GOP candidates were just democrate lite.