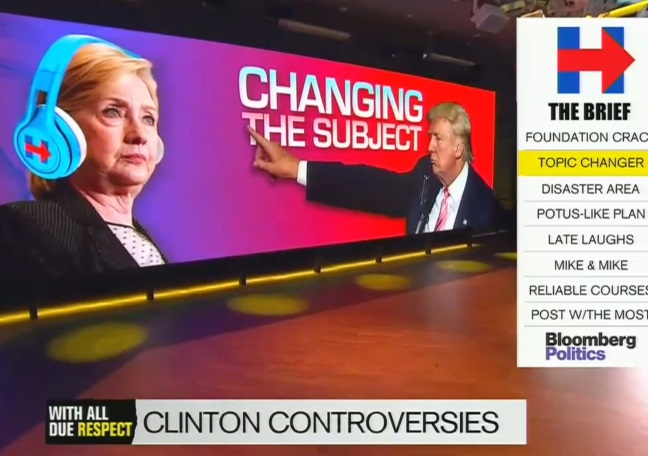 Hillary Clinton escaped catastrophe when FBI Director James Comey declined to recommend criminal charges in connection with her emails. But the influence-peddling pipeline between the Clinton Foundation and the Department of State during her tenure as Secretary might just come back to do her in…

Witness John Heilemann, co-host of Bloomberg TV’s With All Due Respect, on this evening’s show. Heilemann is anything but a conservative or Trump admirer, yet he had the candor to describe Hillary’s State Department dealings as “seamy and seedy.”

Even guest co-host Alex Wagner, a devout liberal, acknowledged: “you can’t get past the number that the AP is reporting today, that 85 of the 154 people from private interests that met with Secretary Clinton while she was at the State Department were donors to the Clinton Foundation. Those numbers are a problem.”

JOHN HEILEMANN: First of all, let’s say this, we have to give this, the Clinton Foundation does a lot of wonderful work around the world. It has done great things. And one of the ways the Clintons and their acolytes and adherents and fans of the Democratic party try to distract and misdirect is to say “oh! The Clinton Foundation! Why are you attacking the Clinton Foundation? It does noble work in Africa.” [Editor’s note: as a guest on Morning Joe today, Heilemann was a witness to Clinton defender James Carville making precisely those kind of arguments.]

Those aren’t the issues here, though. The issues here are about access of really, really rich people, in inappropriate ways, to people in policymaking positions. It is clearly the case that if there is ever a quid pro quo that gets established where a donor asked for something and the State Department changed foreign policy on that, it’s going to be explosive. We don’t have that yet. But there is still something seedy, and seamy, about the way in which Doug Band is sending emails to Huma Abedin saying “this guy is one of our really good friends. Try to set up a meeting.” Sometimes the meeting gets set up, sometimes the meeting would have been set up anyway. But it’s just not the way anybody in either party should want business to be done in our government!

ALEX WAGNER: And you can’t get past the number that the AP is reporting today, that 85 of the 154 people from private interests who met with Secretary Clinton while she was at the State Department were donors to the Clinton Foundation. Those numbers are a problem.

HEILEMANN: Yes, and, let’s be clear about this. Clinton met with representatives of at least 16 foreign governments that donated as much as $170 million to Clinton charities. You know, again, there’s no quid pro quo that’s been proven, no quid pro quo has been asserted, but this is what the Obama administration was worried about when she became Secretary of State, and it now has the potential of being a huge distraction at a minimum for her going forward.

WAGNER: And at not a great time in the campaign.

There are two issues here.

The bigger of the two is that to your average Clinton supporter all this means nothing. They won’t bat an eye lid.

The second, issue is the MFM will just brush this under the carpet and oh did you year Trump punched a baby in the tit! The racist bastard!

Their discussion seems like two fish discussing the high humidity at the bottom of the lake but are not yet ready to say we have water hear.

I see deflections:
– “Those numbers are a problem” rather than Hillary is a problem
– “…the Clinton Foundation does a lot of wonderful work around the world.” Yea, with the 10% of every dollar donated and even that 10% has political/economic paybacks.

The DNC narrative is out & it is to have shallow, vague talking points. Dilute.

Corruption on display – Clintons and the MSM

Speaking of “all that wonderful work”….. anyone notice we aren’t seeing lots of video of all of the Clinton Foundation’s wonderful work? Everyone has seen video of Jimmy Carter building houses and GW out biking and golfing with vets (even Laura is frequently shown meeting with women’s rights advocates and writing books with her daughter). I mean, it should be a no brainer to have already blasted the airwaves with videos of Hillary and Chelsea visiting orphanages in Africa to inoculate against potential criticism.

They can produce all the videos they want, but it won’t change the numbers.

The Clinton Foundation took in $500 million in donations from 2008 – 2012. Of that $500 million, the Foundation spent $425 million on administrative, travel, and other expenses.

If the Foundation were to produce a video of what the Foundation actually does with donors’ money, they’d show Chelsea Clinton flying on a private jet and staying in a luxury resort in Africa or Haiti (before posing for a few obligatory photos with the natives), with the Foundation picking up the tab for the trips. Or they could show the Board members, all Clinton family members or cronies, cashing their big checks at the bank.

Wow, Heileman and Wagner are so surprised by all this. “How could this be?” they wonder.

Crooked Hillary doing what she does best. Showing once again how flawed her judgement is. We have seen her misjudgement time after time. And then when challenged about the bad judgement she lies over and over.

Crooked Hillary is unfit to lead our nation! She has proved this by her own hand!

85/154? I doubt it. That’s an undercount. The number will rise as more strings are connected. Those are just when A donates in order to get a meeting with HRC. It doesn’t count when A has B donate in order to get A in to see HRC.

And only 154 meetings during her term? That’s microscopic. As a Senator, she probably had 154 meetings every week with campaign donors.

Good point. What is the MSM pattern? Lie, hide, deflect, confuse, etc. The real number must be really big for them to float these numbers.

When Alex Wagner says, “Those numbers are a problem,” he means they are a problem because people are learning of them, not because they are true.

Gee, here I thought hitlery had been running on a platform of getting the money out of politics.
Unless she meant getting it out of middle class hands and into hers.
Astounding the depth of stupidity of the average hitlery voter. I wonder if they think if she wins that they’ll get some of hitlery’s stash like the obama voters believed.
Democrats, a sucker taken every second.

“Those numbers are a problem”

He appears to imply that this corruption would be ok if it were at some other, lower, number.

The absolute chutzpah of the Clinton’s is breathtaking! Clearly, they know no boundaries. Our country will take generations to recover from Chairman O, Hillary may take longer.

What was really disturbing is how Huma redirected people who were denied back thru the foundation . She was Clinton’s right hand woman , she had direct access , why the end around.
Any reasonable person would suspect two things .
1. Another level between Clinton and donor if she had to say no or
2. Let the donor run the gauntlet of the Foundation where They get another shot at a bribe ( contribution) . Savvy business men and corrupt Middle Eastern guys would get the hint of the need to grease some palms (,unspoken ,) perhaps they had had not contributed lately and needed to be reminded
..
Why didn’t Huma just pick up the phone with the boss .?