Did the Tea Party become the “Trump Party”?

Did the Tea Party become the “Trump Party”? 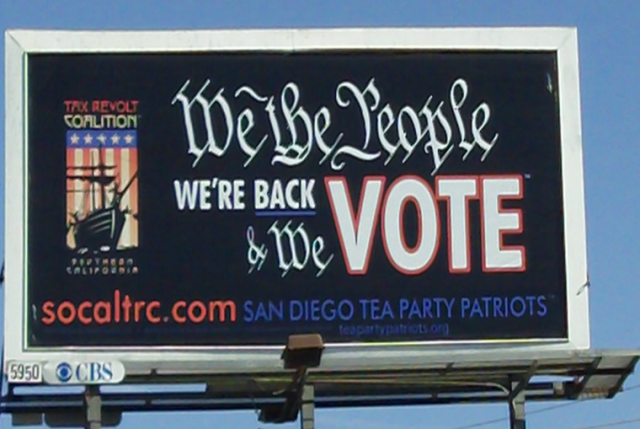 Every now and then, I like to check on the state of reporting as it relates to the Tea Party…for entertainment purposes. I have decided that if any actual fact is offered in the elite media stories, it is purely coincidental.

Today’s review shows that after over 7 years of independent conservative activism, our elite media is still making rather ludicrous claims. For example, this chestnut from Bloomberg:

The Tea Party was always tragically miscast. The angry oldsters who formed its white-hot core fancied themselves tax protesters. Their self-image was informed, inflamed and more than occasionally exploited by conservative operations ranging from Fox News to FreedomWorks and a phalanx of right-wing grifters who dealt themselves into the action.

…Until Donald Trump came along.

Trump, whose genuine populist instincts appear unconscious of, and unencumbered by, American history, dispensed with the tri-corner hats. His offer required no validation from neo-colonials, no resort to hallowed principles of limited government. Trump’s deal was straight up: He would secure the government programs — Social Security, Medicare — that benefit older, whiter Tea Party voters while chasing younger, browner Americans away from the public trough. He would even clear out of the country anyone who failed to prove citizenship.

The Tea Party is now indistinguishable from the Trump Party.

The author of this inanity obvious never went to an event, as there were plenty of young people present. 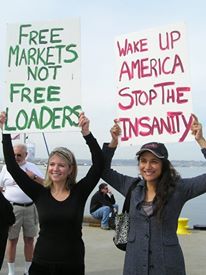 Finally, Donald Trump is not the “Tea Party” candidate. Yes, many of those who were or are still involved with the Tea Party efforts support him. Some enthusiastically so. Others not as much. But clearly there are plenty who are #NeverHillary.

However, many equally engaged members of various Tea Party groups have declared themselves #NeverTrump, and plan to vote Libertarian or write in another candidate. This choice does not make them any less “Tea Party.”

The next lie fisked today centers on an essay entitled “We Killed the Tea Party,” in which Campaign finance lawyer Paul H. Jossey describes how political action committees fiscally gouged Tea Party participants, draining them of money and sapping them of motivation.

What began as an organic, policy-driven grass-roots movement was drained of its vitality and resources by national political action committees that dunned the movement’s true believers endlessly for money to support its candidates and causes. The PACs used that money first to enrich themselves and their vendors and then deployed most of the rest to search for more “prospects.” …

…Today, the Tea Party movement is dead, and Trump has co-opted the remnants. What was left of the Tea Party split for a while between Trump and, while he was still in the race, Ted Cruz, who was backed by Jenny Beth Martin, co-founder and national coordinator of the Tea Party Patriots. In 2014, the Tea Party Patriots group spent just 10 percent of the $14.4 million it collected actually supporting candidates, with the rest going to consultants and vendors and Martin’s hefty salary of $15,000 per month; in all, she makes an estimated $450,000 a year from her Tea Party-related ventures. Today, of course, it’s all about Trump, but Trump rallies are only Trump rallies, not Tea Party rallies that he assumed control of. There are no more Tea Party rallies.

I agree that the national-level Tea Party groups have become less then effective. But real citizen activists have continued to remain involved at the state and local levels. For example, in California, our groups helped support the efforts behind removing a provision in a bill that that would have allowed the use of taxpayer dollars to punish and publicly shame Christian universities for operating according to their beliefs.

The Tea Party movement also has evolved. Some of its members now occupy local political offices. Others are now involved in the PTA. Some, like College Insurrection’s Aleister and myself, now analyze what elite media types fabricate about various topics, such as the Tea Party.

And, as I noted, Trump has not co-opted any aspect from the Tea Party. However, those among his supporters have picked up a few tricks during their involvement, such as taking the time to do their own crowd counts to refute mainstream media’s fantasy numbers.

This is just one of many reasons trust in the American mass media is at historic lows.

What I find fascinating is this coordinated effort for the establishment to foist this new meme on the public in an attempt to taint Trump’s campaign with the smears and false accusations associated with coverage of the Tea Party.

Trump may win in November. He may lose. However, the Tea Party movement will go on..despite continued rumors of its death.

If only the media would report the news instead of crafting what they want the public to believe is news, the country would be in much better shape. Get ready for tanking ratings and print sales. Supply a poor product and get no customers buying it.

I know Bloomberg is very left on politics, but it does cover business more balanced.

But are you sure this wasn’t a blog cross-posted to Bloomberg and Kos or any one of the hit sites like TPM? Every reference to anything or anyone couldn’t be more disparaging. You couldn’t write it better if you were attempting a parody.

Trump would be the natural ally for the Tea Party so it won’t surprise me that many Tea Partiers will vote for the Donald.

Michael Bloomberg in an angry little fascist-wanna-be who is bitter that he’s poured millions into gun control to no avail.

It must gall him to realize that if his prog brethren ever tried to confiscate that he would be hunted down and shot in the street like a rabid dog.

His rag should be treated as just that, a rag.

Yes, I suppose you are correct. His actions have also triggered pushes in the other direction such as campus carry in Texas. Overall I think his money has been wasted, but viewed locally you are correct, the progs have infringed in some areas. And undoubtedly they will never cease, because progs gotta prog.

Bloomber isn’t bitter at all. He understands what a whole mess of alleged ‘conservatives’ apparently don’t – that a Clinton win means the end of the 2nd amendment.

Heller was only a 5-4 decision. Clinton replaces Scalia with a lockstep liberal and they ban handguns country wide and the Supreme Liberal Rubber Stamp Court upholds it. Then they’ll incrementally ban various ‘scary’ guns until they finally just outright ban guns outside of ‘responsible’ government hands.

“The Tea Party is now indistinguishable from the Trump Party.”

Finally…a point we can all agree upon. It’s a Legal Insurrection miracle. 😀

Anybody can look up the several excellent Bill Whittle TEA party addresses and see how far T-rumpism is from the TEA party conservative ideal.

When the Democrats and Washington Republicans blew off the tea party, what did they think was going to happen?

For what it’s worth, Trump’s Twitter shows strong support for Tea Party issues.

S.O.C.O. The Pueblo county T party.
In the initial 2009 rally over 400 people attended.
The 2010 rally drew a similar attendance.
S.O.C.O. was from the outset controlled by a rogue rump of conservatives looking to establish a counter conservative influence in the regular Pueblo county GOP. In 2010 it’s purpose was to assure conservative candidates for nomination. In the 2010 election Scott Tipton, Mike Coffman & Cory Gardner were elected to the house under conservative auspices. Non in truth were. All still hold office, Gardner is now senator since 2014.

In 2010 Ken Buck was the T party influenced candidate for senator. GOP regulars sabotaged his candidacy along with T party Dan Maes for governor. The Colorado house became GOP largely thru T party effort. It’s notable achievement was the Colorado version of the ACA, Amycare. Amycare is now defunct.

That was the last year of S.O.C.O.’s existence. It ended with assorted lawyers picking over the carcass. That is the truth, I was there throughout the duration.

None of those 2010 elected republicans have a C.R. rating above a very low D. All are at best around 60%. Gardner since his election as Senator is well below 50%. The 3 member South Dakota DC “conservative” delegation is even worse. 2 are below 50%.

“Did the Tea Party become the “Trump Party”?”
Hell NO!

Indistinguishable on many levels.

Trump may ultimately get my vote, but don’t expect any warm and fuzzies–he’s already said he doesn’t need me, and I like it that way just fine.

This Tea Partier is NeverHillary. Donald Trump (or anyone on the ballot in 2016 who can beat her) is simply a means to an end.
I was there on 9/12/09, those were the good old days. The Tea Party shall rise again!

Agree Buckeye – I was there too and it was a powerful statement to the Wash DC insiders and the press.

” After seven years, the American press and Beltway pundits still don’t get the concept. ”

They don’t want to ‘get the concept’.

The media creates the narrative to fit their agenda.

They get it, but if they acknowledged that they do, they’d then have to admit that we’re something to be reckoned and/or dealt with. Ignoring us means that the lofos don’t have much of an idea we exist and the lame stream media’s narrative isn’t interrupted.

I agree with most points, but I find it hard to deny that Trump’s AltRight nationalists crowded out Tea Party Liberty-minded types. Here is Kevin Williamson on this:
http://www.nationalreview.com/article/437967/libertarians-rand-paul-hillary-clinton-bernie-sanders-donald-trump-nationalism-socialism