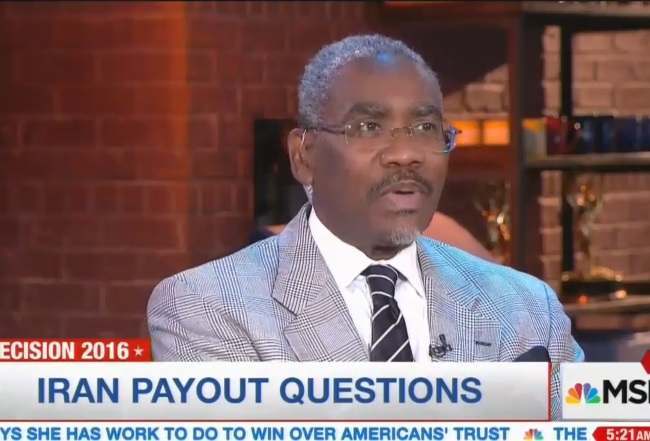 Got to give Gregory Meeks credit. The Dem congressman managed to keep a straight face on MSNBC this morning while telling a string of whoppers about the Iran hostage deal.

Among Meeks’ laugh lines: 1. the Obama administration did not pay ransom for the release of American hostages held in Iran; 2. the way the deal was handled shows the “efficiency” of the Obama administration; 3. the goal was to “save the American people hundreds of millions of dollars;” 4. “No. I doubt” and “am not going to say” that the hostages were not released until a plane carrying money from the US arrived—this despite the first-hand account of a hostage indicating that is what happened.

It’s worth watching the video to see just how much smoke and mirrors Meeks deploys in an attempt to obfuscate the truth. Rather than being able to convincingly deny that ransom was paid, he in effect argues from his conclusion: since America does not pay ransom, the payment could not have been that.

ALEX WITT: Let’s bring in New York Congressman, Democrat Gregory Meeks. The congressman sits on the Foreign Affairs committee, always welcome here in our studio. Thank you for joining me sir. All right, so the [Wall Street] Journal is quoting these unnamed sources saying the detainees were released on the same day that the money was paid out. Coincidence, plausible deal that’s some sort of a payment was made for the return, or is it truly just completing that which was already arranged and was set up in January and it just happened to time out?

GREGORY MEEKS: This was not a secret deal and the president announced beforehand that the deal was agreed upon at the Hague. Money that was past due to the Iranians. Different people negotiating the deal from who was dealing with the hostage situation that was dealing with Iran to prevent them from having a nuclear weapon siltation. So to me it just shows the efficiency of the Obama administration. You have three different folks negotiating different deals.

WITT: Okay, but, can you see how some could say that Iran really had to call the shots here. And they said, we will release, but we want this money that is promised to us now. So timing-wise: coincidence or really maybe a power play by Iran?

MEEKS: Absolutely not! Again, you look at what we were after in this particular scenario: saving the American people hundreds of millions of dollars because this agreement saved the taxpayer a substantial amount of money. And so the president and the administration was focused on that deal that was long, money that was due since the 1970s and we tried to figure out the court deal and had nothing to do with negotiations taking place on other parts. And now so you worry about the results: three separate people negotiated: it wasn’t like it was all in one negotiation. Three separate negotiations going on shows that the administration can do more than one thing at a time.

WITT: Sure, but in terms of timing I want to read part of the interview that one of the hostages, prior to being completely freed, I mean he was in the process certainly. Here’s what he said. “I asked them why you don’t let us go. Because the plane was there, the pilot was there, everyone was ready that we leave the country. They said we are waiting for another plane. And until that plane doesn’t come, we never let you go.” So what was on that other plane? Was it the $400 million payment?

MEEKS: No. I doubt it. I don’t know. So, I’m not going to say whether it was or not. But I know that, there were three, we were told at the time about the deal with reference to the money going to Iran with reference to the agreement that was made in the Hague. So it’s clear that Americans do not and the president was very clear, do not pay ransom for hostages. This was a separate, distinct negotiation on all three. And I think what we can focus on is the end results is the American people saved a substantial amount of money, we got our hostages home, and we prevented Iran from getting a nuclear weapon and that makes the whole world a safer place.

Cognitive dissonance is a biatch.

This is The Most Transparent Administration Ever™, how could there be any doubt they’re telling the truth?

Next, you’ll be telling us they lied about Obamacare! Or Benghazi! Or Fast & Furious! Or..or..everything!

See? It’s wrong to say that Democrats do not have a relationship with the truth.

It’s just the same kind of relationship Jeffrey Dahmer had with the heads he’d chop off his victims and keep in his refrigerator.

He has the mental defect that Crooked Hillary has.

They can not tell the truth! Both are compulsive liars.

Obvious follow up question they will never ask: “How much were you (or will you be) paid for giving such transparently stupid and dishonest answers?”

Meeks is correct. A jet weighted down with $400 million in cash would’ve tipped the Island of Iran right into the Persian Gulf.

All of the above, squared?

Meeks: in office for however long he wants to be.

Not only was this obviously ransom, but it also was criminal and in violation of sanctions and money laundering statutes.