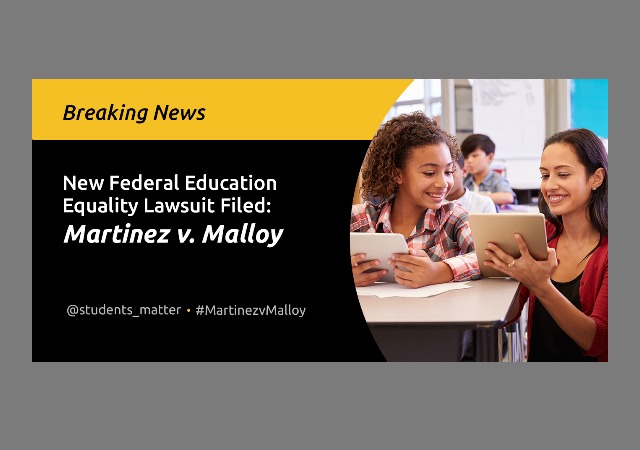 Advocacy group Student Matters filed a federal lawsuit in Connecticut to make education a constitutional right due to the state’s restriction on magnet, charter schools, and school choice programs. It alleges the state’s limited school choice for parents force “thousands of low-income and minority students to attend low-performing schools.” The group insists now is the time for the federal courts to recognize education as a fundamental right:

“The fundamental principles of equality in our country demand that every child have a chance to get an education, to learn and to have that platform to succeed,” said Theodore J. Boutrous Jr., an attorney for the plaintiffs.

An advocacy group best known for using the courts to challenge California’s teacher tenure laws has now taken its legal strategy to Connecticut, where it has sued state officials over “anti-opportunity” laws that restrict the growth of magnet and charter schools and that limit inner-city students’ ability to transfer to more affluent suburban school districts.

The California-based group Students Matter argues that those limitations trap thousands of poor and minority children in terrible schools that are failing according to Connecticut’s own rating system, violating what should be considered a right to education under the U.S. Constitution. Federal courts have never recognized a fundamental right to education, but the plaintiffs argue that they should do so now.

43 years ago, the Supreme Court “ruled in the landmark San Antonio v. Rodriguez school-funding case that education was not a constitutional right and that the disparate spending on education for students from low-income neighborhoods was not a violation of the equal protection clause of the U.S. Constitution.” Student Matters wants the courts to reverse that decision:

“The time has come for the federal courts to recognize a federal constitutional right to some minimal, adequate level of education. We felt Connecticut was a very good place to bring it,” said Theodore J. Boutrous, one of the attorneys representing the seven student plaintiffs from low-income families.

Boutrous told reporters during a Wednesday conference call that the Rodriguez decision “left open the possibility that a claim like ours could succeed” since that case focused on school funding disparities while this lawsuit focuses on the limited options students have to leave failing schools.

The lawsuit questions the laws in Connecticut “that explicitly restrict or restrain growth of charter and magnet schools.” In 2009, the state lawmakers “passed a moratorium on spending state money for new magnet schools until the state education commissioner crafts a comprehensive plan for school choice in the state.” The department spokesperson said officials hope to have a plan by October 1.

However, state attorneys said the government will not fund new magnet schools in Hartford. Gov. Dannel P. Malloy (D) has also stated “he doesn’t believe the state has an obligation to open more magnet schools.” He wants to use the money to improve existing schools.

Of course, Connecticut officials boasted of success in their public schools, contradicting the reasons why Student Matters chose their state for the lawsuit.

Last week, Malloy touted the release of the state’s standarized test, which shows “big improvements in our students’ learning across the board.”

ConnCAN disagrees, saying the “lawmakers have proven either unable or unwilling to fix the laws and practices that are violating the rights of Connecticut’s students.”

“Hardworking Connecticut families must not be forced to send their children to failing schools,” said Jessica Martinez, mother of one of the student-plaintiffs in Martinez v. Malloy. “Because of rules that benefit the status quo, instead of students and parents, the schools getting it right and meeting the educational needs of our students are effectively prevented from expanding.

As urban parents, we have to work ten times as hard, be ten times as engaged, and be ten times as savvy about the system to give our children even a slim chance of getting into a quality school. Connecticut’s laws hurt and impede, rather than help us.”

The Govt hates it when they are not viewed as god.

If my kids go to public school, if there are any left, I will re-educate them at home and correct any Leftist propaganda thrown in their innocent face.

Oh and I forgot about the Union dictatorships that do more harm than good.

There seems to be a contradiction between the title of the article and its content.


Declare a constitutional right to education? Strategy to attack charter schools in CT

But then it talks about how

The lawsuit questions the laws in Connecticut “that explicitly restrict or restrain growth of charter and magnet schools.”

Am I getting it right?

Opening up education to charter and magnet schools looks to me like benign cover for more sinister intentions.

Once something becomes a “right” the road is clear for total domination by the Federal bureaucracy … and we know how well that works out.

I don’t see how one thing relates to the other.

Charter schools give families an alternative option to federally controlled public school, sometimes the ONLY viable alternative. That’s exactly the main reason why Democrats and teacher unions have waged such vicious war against charters.

In my opinion, the ideal would be to close down the Federal Department of Education, reduce the State Departments to the minimum necessary to administer a voucher program, and let families and the market decide where the money goes.

Sure. That’s what I mean by “benign”—a wider range of educational options seems like a great idea, as they remove the constrictions of the official state school system.

But making education a “right” is a far bigger hammer than is needed just to free up charter schools in Connecticut, a hammer capable of smashing things we’d rather not see smashed.

If they skipped the “fundamental right” business, and concentrated on enabling charter schools, I’d see no cause for alarm.

Ok.
I get your point now.

Does the CT state constitution have a “Right to education”?

If not, I would hope the court doesn’t just find one in the miasma of political correctness.

I know the federal Constitution does not. It rather, has the right to an OPPORTUNITY for education.

Not to worry, 4 years of klinton will allow the activist, PC judges to find all sorts of new and improved liberal rights.
Look at what we’ve gotten with obama.

Education in America is a gigantic scam.
We spend $11,000.00 per student per year, but most of that money goes down a black hole.
Federal and State mandates subject students to constant testing as early as pre-K all the way to 12. Schools under USDOE control therefore spend most time and resources test-drilling our kids.
A big chunk of the budget goes to pay for resources that have little or no impact in learning, but sure make cronies and union bosses happy.
And the families have no say.

I know a large portion of the money is simply wasted. I have, in my classroom, more than $15,000 worth of equipment and it mostly just replaces my whiteboard/projector. But, it sure is nifty that my thermostat is touchscreen.

Most money goes two places – Hiring people to grab a larger share of funding and buying equipment to exacerbate our edutainment habits.

Newark, NJ has one of the worst school districts in the country. Yet they spend more than $21,000 per student.

Tell me how you can’t write an $18,000 check per student to the parents and give them a choice and they won’t do better than the pit that is the Newark school system.

Parents can send their kid to a Catholic school (I’m not, but I attended one as did one of my kids for a brief time and the education was excellent and no-nonsense) and get a great education. They probably get to pocket $5,000 a year too, which would make a difference in lives of most families who live in Newark.

The kids get a great learning environment.

Never happen – but it should. Liberty and choice win every time.

Didn’t the SCOTUS already effectively find a Constitutional Right to education in Plyler v. Doe? The SCOTUS there, 5-4 determined that illegal immigrants were entitled to a public education that had to be provided alongside citizen children, due to the 14th Amendment’s Equal Protection clause of a “person within its jurisdiction.”

“By denying these children a basic education, we deny them the ability to live within the structure of our civic institutions, and foreclose any realistic possibility that they will contribute in even the smallest way to the progress of our Nation.”

That language is effectively applicable across the board.

The unions want a constitutional right to a crappy education, rather than a good one with charter schools.

Maybe the school boards can be replaced and reforms enacted to improve the bad schools. And the students who are refusing to work towards their education can change their attitudes.