Campaign Manager Mook Blames State Department Pros, Ignoring That Only Hillary Email They Could Send to Was Her Private One 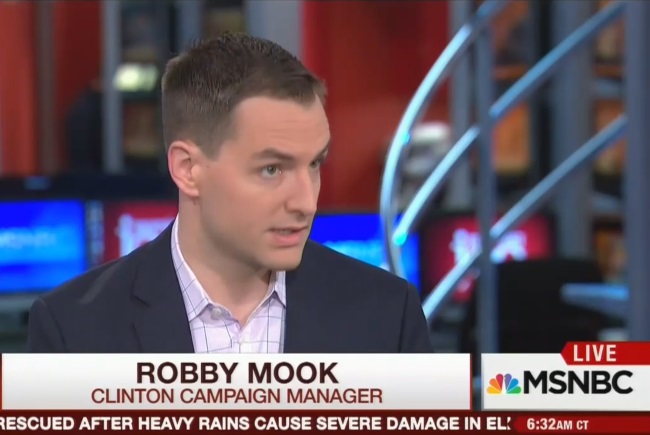 As we reported yesterday, in her Fox News Sunday appearance, Hillary Clinton blamed “professionals” on whom she was “entitled to rely” who “made the wrong call” by sending her classified material.

Appearing today on Morning Joe, Hillary Clinton campaign manager Robby Mook continued to blame others, whining that the emails containing classified materials came from “long-time tenured State Department professionals.” But as Scarborough and others on the panel pointed out, Hillary forced others into sending her classified information in an improper way because she only maintained email on her private server.

Kudos to Scarborough for pressing Mook on the matter. But boos for failing to raise another outrage from Hillary’s Fox News appearance. Clinton condescendingly said that she doesn’t “hold any ill feeling” toward the Benghazi families who say she told them a video was responsible for their loved-ones deaths. Morning Joe spent much of its first hour today blasting Donald Trump for criticizing the Gold Star Khan family. Why didn’t they ask Mook about Hillary questioning the veracity of the Gold Star Benghazi families?

JOE SCARBOROUGH: Robby, thanks so much for being with us. No, we’re not going to throw you a softball. How could Hillary Clinton say that she did not send or receive classified e-mails? She said that yesterday on Fox News. It was a shocking, jaw-dropping moment.

ROBBY MOOK: Well first of all, Director Comey–well, actually, let me just say first of all, she said that this was a mistake and she apologized and said she would do it differently if she could go back.

JOE: So let me ask you this, could you not go to her before that interview and say to her, Madame Secretary, just say it was a mistake and don’t say anything that you said in the US press conference and let’s move along?

MOOK: Well, she has said repeatedly —

JOE: No, I’m asking could you do that? Would you be fired if you did that?

MOOK: No, she would encourage me to tell her to tell the truth.

MOOK: But she said this is a mistake multiple times and she apologized for it. What Director Comey said was there was that he believes ther was no basis for her to believe that the emails in question that you’re referring to, that she had any reason to believe that they were classified.

JOE: I think he said just the opposite. He said a reasonable person in her position should have known they were classified even if they weren’t marked.

MOOK: Well, but that’s leaving out the fact that these emails were coming from hundreds of State Department employees. These were long-time, tenured State Department professionals,worked for different administrations. These folks are not partisan. They were the ones sending her the emails. She, in his mind, she had no reason to believe they were classified.

ELISE JORDAN: But weren’t they forced in that position though? Because they had no other outlet to communicate with her. so you can’t really put blame on State Department professionals if the leader of the organization is saying email us at this address. This is all, this is the only option you have.

MOOK: Look, classified information is sent over a completely separate system. So it was their decision to send it —

JORDAN: I know that–I worked at the State Department too.

MOOK: Well there you go.

JOE: But that makes it even worse though. She was forcing everybody that wanted to communicate with her to move out of the classified realm where you send classified information and then put it on their own servers and then send it to her. So isn’t that even worse?

JOE: Well, you would understand this. The FBI director said she did.

MOOK: What the Director of the FBI testified was that he did not see a basis to believe that she knew the information in question was classiied when she received it. That’s what he says. But Joe —

JOE: Mark, was I watching an alternate hearing? Because it seems to me he said just the opposite, that a reasonable person would have known.

The people who make a living at defending all this nonsense and trying to spin corruption, make me ill. How dare they spread that garbage. Defending the indefensible and protecting the corrupt is evil.

Mook’s statements will become the de facto media narrative now. It wasn’t her fault, it was everyone else’s fault and besides she said she was sorry.
The MSM will now start forgetting all about this very soon. Wolf Blitzer will pretend he’s being fair and balanced when he’ll say it’s all old history that it was not her fault and that will be the end of it.
Everyone will now fall in line.

I predict, before this campaign is over, “mook” will become a verb.

It already is. From the De Niro movie, Mean Streets:
https://www.youtube.com/watch?v=TswwON_Hs1M

This a-hole of Clinton’s is aptly named.

We’ve had 7 years of Barack Obama having department after department of his administration fail to do and do stuff that shouldn’t happen.

It’s never his fault .. his administration is flawless.

We don’t need another 2 1/2 year (before Hillary leaves office) of this same stuff.

Haha! Reminds me of the Bernie supporters who were calling the United States the biggest exporter of terrorism in the world. Don’t they know that a Democrat has been in charge for seven-plus years? What are they saying about Barack Obama? But I guess it’s still all Bush’s fault.

“Look, it’s not my fault that those two nuclear warheads used this morning by Iran to devastate the cities of New York and San Francisco were misappropriated by the mullahs to attack us. We gave them all that fissionable material in good faith, and they promise in that 2015 agreement to abide by its terms. It’s not my fault.”

Yes, Hillary is Ready .. Ready to blame others

I believe that Hillary Clinton is tough enough to make the difficult choices, to fight hard to blame other Democrats when she falls short, and to be as unrelenting with filling her personal bank accounts as she has been with her own career.

mook
Coined in the Scorsese film, ‘Mean Streets’, meaning a arsehole or loser.

I’m not paying, because this guy’s a mook

The apple does not fall far from the tree does it?
Robby Mook is a bold faced liar just like his lying boss,
Crooked Hillary.

The Clinton campaign is a vile mixture slimy people who have no issue lying to elect Crooked Hillary.

WHY WOULD ANYONE BELIEVE THIS BUNCH?

So Hillary forced her staff to choose between violating national security and providing the Secretary of State the information she needed to do her job, and it’s their fault.

Hillary: Well, you know {Place MSM Interviewer name here}, the devil made me do it, so I am not responsible for ________ [fill in the blank]!

Soon to be known as the “Clinton wears Prada” defense.

I have to say, this is a pretty foolish tactic on Hillary’s part…. Comey gave her an out and all she had to say is that she deferred to his statement and shut up. But she just has to keep spinning it, which makes Comey look foolish for his Hari Kari attempt. I’d like to think that eventually, he gives up and lets her hang herself.

I just read that Assange (sp?) said his next WikiLeak will lead to Hellary’s arrest.

That would be SOOOOOOOOOOOooooo good…!!!

I would say a big Amen to that, but that might be taken as sexist. 😉

I believe Mr. Assange said during a CNN interview early this morning that soon he will post leaked documents that implicate HRC in the transfer of weapons to ISIS. It was difficult to hear him well due to his low-bandwidth connection.

Here is what I saw this morning on cnn:

The problem with this is the word “implicate.”

Unless you have video recording of her personally handing the leader of ISIS a bazooka and him handing her a monetary instrument (cash, check or charge), the Clinton’s will spin it as “well, I didn’t ~mean~ for ISIS to acquire weapons. I just thought that we were transferring them to our ALLIES