Chris Matthews Suggests Trump ‘In the Bunker’ Like ‘Third Reich’

Chris Matthews Suggests Trump ‘In the Bunker’ Like ‘Third Reich’

If Whoever Makes the Nazi Analogy First Loses, What Does that Make Matthews? 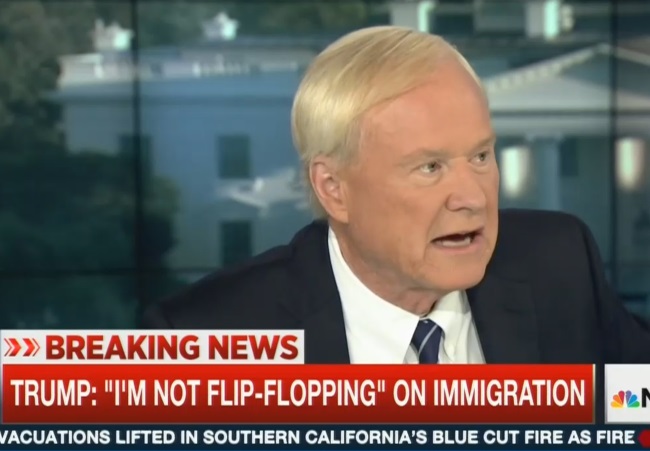 In recent days, Donald Trump has made a concerted effort to moderate the tone, and some would say the substance, of his campaign. So how does a notable member of the MSM reward him? By analogizing him in explicit terms to a Nazi.

On Monday evening’s Hardball, Matthews asked if Trump is “in the bunker?” Making the Nazi analogy clear, Matthews said that “somebody compared him to Downfall, the movie about the end of the Third Reich.” Matthews admitted: “it’s never fair to do that,” but that of course didn’t stop him, as he suggested that “he’s in the bunker but doesn’t know what’s going on outside. ”

For what it’s worth, the Washington Post‘s Gene Robinson demurred, saying that Trump follows every poll and is well aware of his situation.

With the football season approaching, let’s use a Vegas analogy: do you take the over or the under on 1,000 times that between now and the election the MSM will use a Nazi analogy on Trump?

CHRIS MATTHEWS: Is he in the bunker? Somebody compared to the Downfall, the movie about the end of the Third Reich, and said–it’s never fair to do that but–the idea, he’s in the bunker but doesn’t know what’s going on outside. Does he know he’s falling? Is he facing the abyss?

EUGENE ROBINSON: Look, I think he follows every number and every poll. I think he is — it’s like a fever chart for him. And every day, and he’s looking for a little uptick and a little encouragement. But I think he knows where he stands.

ROBINSON: Right. And only for that reason, he’s agreed to these strictures that he may not be able to keep for very long. He hasn’t in the past.

C’mon Finkelstein, it’s bad enough you have to gag us with MSLSD all the time, but Little Chrissie Matthews, too?

The guy is insane, who cares what he thinks?

At some point, someone is going to release a ton of bumper stickers that say …

The MSM is so over the top for Hitlery that they are earning votes for Trump in record numbers.

If this keeps up, I would fully expect that “Do your job” and “Tell the truth” chants are going to be the least of the MSM’s worries soon.

I got to admit I went there already…

Chris Mathews should of his own volition go out on the ice & die.
He could set a new liberal trend.
Bill Krystal could join him.

Hillary hasn’t held a press conference in what, 262 days, and Donald Trump is in the bunker?

Please remember this is the guy who got a thrill up his leg when watching a Obama speech!

“Not that there’s anything wrong with that.” 🙂

Abortion chambers in a final solution.

The Democrats loses. But they don’t, do they?

As per Karl Marx, history repeats itself, first time as a tragedy, second time as a farce.

Matthews first claims “It’s never fair” to compare a candidate to nazis, then before he takes another breath, compares Trump to a nazi.

Yet if he had done that to Hillary, Security would have been cleaning out his desk before he got off the air, and he would have been behind the building, holding onto a cardboard box full of pens a few minutes later.

And shortly after we would discover he had committed “suicide”.

And will be buried next to Vince Foster. Hilldabeast keeps’em close.

Interesting Chris, who is the real one hiding out in a bunker., trying to hold her lead? Trump is out campaigning her with more stops and bigger crowds by 100 times her crowds. He’s working like a dog while she “rests”.

Right…Trump is in the bunker, while Hillary is out with the people everyday and doing press conferences and making herself available. Right? Talk about not knowing what’s going on….