“I don’t think [Clinton’s] for women or girls. I think she’s lying, I think she said anything she can to get in the campaign and win.” 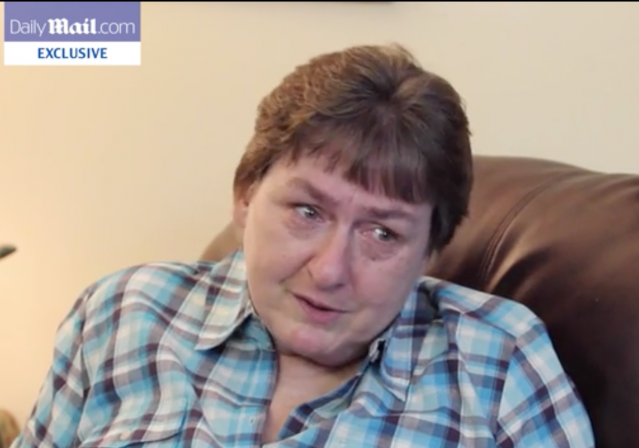 Kathy Shelton was twelve years old when she was raped by a drifter in 1975. Thomas Alfred Taylor, her attacker, served less than a year in prison thanks to his defense attorney, Hillary Clinton.

Watching Hillary paint herself as a candidate that advocates on behalf of women and children was too much for Shelton who broke her decades-long silence to speak to The Daily Mail.

WARNING: Shelton’s interview provides graphic details of her rape and is difficult to watch.

‘It’s put a lot of anger back in me,’ said Shelton, now 54, in an exclusive interview at her Springdale, Arkansas, home in August. ‘Every time I see [Clinton] on TV I just want to reach in there and grab her, but I can’t do that.’

In 1975, Clinton served as the defense lawyer for Thomas Alfred Taylor, a 41-year-old factory worker accused of raping Shelton after luring her to his car.

Taylor pleaded down to ‘unlawful fondling of a minor’ and served less than a year in prison after Clinton was able to block the admission of forensic evidence that linked her client to the crime.

In a lengthy interview with the Daily Mail Online, Shelton said Clinton is ‘lying’ when she claims to be a lifelong defender of women and girls.

Shelton said Clinton accused her during the case of ‘seeking out older men’, and demanded that the 12-year-old undergo a grueling court-ordered psychiatric examination to determine whether she was ‘mentally unstable’.

‘I don’t think [Clinton’s] for women or girls. I think she’s lying, I think she said anything she can to get in the campaign and win,’ Shelton said. ‘If she was [an advocate for women and children], she wouldn’t have done that to me at 12 years old.’

While Shelton gave an anonymous interview to the Daily Beast in 2014, she said wants to start speaking out publicly, in part because ‘I think a lot of people would look at [Clinton] in a different way’ after hearing her story directly.

‘I want to speak to the world. Out there at the White House, so everyone can hear me,’ said Shelton. ‘That’s always been my thing since the anger’s built up. I want to speak out like [Clinton] does, and let the whole world hear it.’

For decades, Shelton said she had no idea that Clinton was the same woman as the lawyer who defended her rapist in 1975.

The details of Clinton’s defense are particularly disturbing:

During the case, Clinton accused the 12-year-old of ‘seek[ing] out older men’ and ‘engag[ing] in fantasizing’ in court affidavits, and later laughed while discussing aspects of the case in a recently-unearthed audiotape from the 1980s.

On the audiotape, Clinton indicated that she believed Taylor, her client, was guilty, saying that his ability to pass a lie detector test ‘forever destroyed my faith in polygraphs’.

She also laughed while describing how she was able to get a world-famous New York City blood expert to question the admissibility of forensic evidence that was misplaced by the crime lab after it was tested.

The tape, which Shelton said discredits the notion that Clinton truly cared about protecting young girls, raises new questions that she wants to ask Clinton directly.

‘I heard you on tape laughing,’ said Shelton. ‘I just want to know, you’ve got a daughter and a grandbaby. What happens if that daughter of yours, if that would have been her [who was assaulted at age 12]?’

‘You would have protected her. You don’t know me, so I’m a piece of crap to you,’ added Shelton, who lives in the same small northwest Arkansas town where she was raised by a single mother. ‘Who cares about me, as long as you can win your first case as an attorney?’

Shelton is hoping that speaking out will shed light on a side of Hillary often ignored. She said she always wanted to have kids, but due to the severity of the rape, doctors told her it would be very unlikely she could conceive. Shelton does not have children of her own.

Play her interview with momentary cuts of Hillary saying that women should be listened to and believed and you have an effective anti-Hillary ad.

This could devastate her support among women, and all it involves is exposing Hillary’s own speech and actions. Why would they NOT use this?

If nobody from the Trump campaign does that — if nobody even asks permission to use the tape to do that — that will confirm my as-yet unproven-but-not-disproven suspicion that Trump has always been and continues to be a stalking horse for Hillary.

You bring in the big artillery just before the final assault.

If Trump uses this before October, maybe I’ll start believing all those claims that he’s just an out-of-control goof.

It’s too bad someone had to ruin whatever surprise value this would have had.

I am in total disagreement with you who think this incident will hurt hillary.My God! Add the reasons to hate and not vote for her and they are staggering! Four deaths is the main reason but there are many, many more. I have seen this raped woman and she is kind of rough and the hillary elites will make short work of her the way they have with Paula Jones, Juanita Broderick, Jennifer Flowers and Kathleen Willey and many more who remain anonymous out of fear. People like us keep waiting for the big hammer to drop but there isn’t a big enough hammer to squash hillary in the eyes of the Dem faithful. One poll even showed that many would be happy with her being president from PRISON! I thought that GWH Bush would drop the hammer on bill clinton for his Russian involvement but he never did.

You’re post on “The Benghazi Hooch” is spot on.This is just another pebble to be ignored and/or paved over on the road to President45.

Not if you call them immoral with the ad.

We have been trying to convict them using the law, which appeals to the rational.

We need to appeal to the irrational low information voter and call them mean, immoral, and dangerous.

There exists audio tape of an interview with Hillary where she laughs about this case and the fact that she got the rapist off on an technicality.

Hey, the rapist did better than Bill. Hillary never got Bill off.

Clinton has admitted as much. Women, and babies, too, will be sacrificed for the “greater good”. The Democrats wholly embrace class diversity (i.e. “skin color”-based discrimination) to replace diversity, which rationalizes and enables the Pro-Choice religious/moral philosophy.

However cold, calculating, cynical and soulless she is, she had an ethical duty to vigorously defend her client and that should not be held against her.

Point taken. And if Trump uses this as an ad, the entire Republican establishment will disavow him as an apostate, because….

waitaminnit. How come it’s only the Republican Party that eats its own? They are doing massive amounts of favors for Hillary Clinton, right now. I do not understand why, and I know for a fact it’s not because of anything that The Donald has said that’s so awful. They know better than to fall for media BS, and they seem to be falling all over themselves to do favors for the Democrats, ever since the TEA Parties started to form.

She had a duty to make the state prove their case. She didn’t have an “ethical” duty to suggest the 12 year old girl was responsible for a 41 year old man raping her.

She does know Hilliary, however.

Where are the accolades for her courage to speak up? She’s risking a helluva lot speaking up like this. Certainly more than Jenner. I’m betting she doesn’t get a reality show out of it, and I’m hoping she gets the satisfaction of helping to rescue our country from Hillary.

Even if it was statutory rape, it was rape.