Can the GOP Maintain Their Majority in Congress?

Can the GOP Maintain Their Majority in Congress?

Trump candidacy showcases the divide within the GOP. 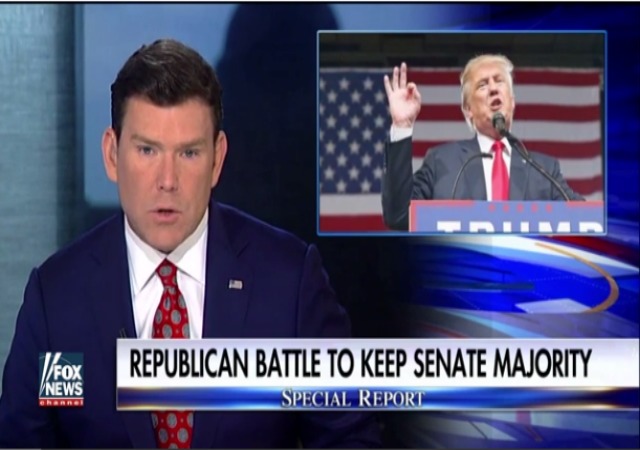 The 2016 primaries and election so far has rattled the GOP, leaving many to wonder if the political party can hold their majority in the House and Senate. GOP presidential candidate Donald Trump’s numbers aren’t helping:

But, as Trump’s numbers — nationally and in key swing states — continue to tank, a creeping fear has taken root within the Republican establishment that maybe, just maybe, a landslide loss at the top of the ticket could cost the party not only the upper chamber of Congress but the lower one, too.

Overall, though, the consensus is the GOP will not lose their majority mainly because the presidential election obviously takes precedent this November. Also, the Democrats need to win 30 seats to win the majority in the House. But there are some districts that could fall to the Democrats. From The Washington Post:

Of the 45, 40 remain largely intact from the 2011 national redistricting process. (Florida engaged in a mid-decade redraw.) For those 40 seats, we can overlay the Cook Report’s Partisan Voting Index (PVI) in an attempt to compare apples to apples. (The PVI ranks every district against every other district based on presidential performance.) Of the 40 GOP-held districts, 36 have a PVI of R+5 or lower, meaning that they are five points (or less) more Republican at the presidential level than all of the other districts in the country.

If Republicans lost all 36 of those seats with a PVI of R +5 or lower — and Democrats held all 11 of their contested seats — Democrats have the House majority. By six seats. Twenty-seven of those 40 seats have a PVI of R+3 or lower. Win those 27 and Democrats need to pick up only three seats among the slightly more Republican-friendly districts to win the majority.

But analyst David Wasserman told The New York Times that he has seen people differentiate their House candidates from Trump:

“Trump is such a unique candidate,” Mr. Wasserman said of the billionaire, who has feuded with the news media and political adversaries from both parties.

Citing the last two elections in which voters flipped party control of the House, he added, “We don’t really see the groundswell of support we saw in 2006 or 2010.”

But the Senate may cause trouble for the GOP since they will lose their majority with only three seats:

Confidence that Republicans can limit House losses to 20 seats or fewer and retain control of that power center rests on Mr. Trump’s position stabilizing. He currently trails by seven percentage points in The New York Times average of national polls.

Cook Political said they see Clinton beating Trump in November, but “the size of the margin is still in the air.” Charlie Cook wrote:

So maybe all the Republican opposition to Trump has hurt the down ticket too.

I’m sure that someone or some severals are spit-shining that turd right now.

The opposite is true in the context of the story, which is what the impact of T-rumpism is on the various congressional candidates.

In a lot of places, it is good to differentiate from Der Donald and the Nationalist Populists.

You would think if those in the elected class REALLY cared about “principles” they would be doing more of what Ted Cruz did at the convention.

The truth appears to be they are only concerned with power. And Trump is not “in their camp” solidly enough on a few key issues, immigration being the primary one. So, even though it is a stretch to rationalize it fully, the idea that the elected class wants to punish the poor slobs who are voting for Trump by allowing 4 more years (or 8) of Obama is getting less far fetched. And plenty of supposedly “conservative” and “principled” in the GOP elected class already show their disdain for the conservative electorate, especially the Tea Party folks. (McConnell is the face of that “elite” group). Transferring that to Trump voters is easy.

Monofart is resigning from the T-rump campaign.

With Hillary as POTUS, Democrat controlled courts and congress would be the final nail in the coffin for America.

I suggest you find a nice mountain top and wait for the end. If that is too chilly for you, you could get a sandwich sign announcing “Repent, the end is nigh!” and march in front of the WH.

The polls are all over the place. Something obviously is going on. Trump draws 10 times as many people to his events than Hillary Clinton does to hers. it doesn’t matter how you “spit shine that turd.”

It doesn’t matter how you “spit shine that turd.”

“If Donald Trump is to lose…”

…then Donald Trump owns that.

What exactly are he and his avid supporters doing to win the votes of those who aren’t already in the bag for him?

The GOP said they couldn’t stop obama because they didn’t have a majority. They were given a majority and what did they do? Gave obama everything he wanted because if they didn’t he would have vetoed it. If they aren’t going to represent our interests, the clear them out of congress.

The Republicans “Gave obama everything he wanted” I guess he should have sent Santa a bigger list – like a Zika bill? Florida’s Gov. Scott (R) is starting to freak out.

The crying boehners stabbed us in the back, and help destroy the nation. They should be locked up in the same dungeon as Hillary Clinton.)

This was our mandate, and theirs to lose. They lost it. (Sold it, really.)

The GOPe is profanity, fronted by the grotesque McConnell, the idiot Prebus, and the hack Ryan.

Remember, the GOPe has no base: only money. In other words, no voters.

If you want to look to one group of people to blame for our nation’s demise, look to the people who sold you out: the crying boehners of the GOPe.

Sadly this email to the GOP was right on target.

One reply to a Stop Hillary PAC fundraising email targeting Democrats lack of support for the Benghazi commission reads,

“Don’t the Republicans have a majority in Congress? Isn’t John Boehner a Republican? What is the problem that you need my $36 to help you fight back.”

It will be a long, long, long time before the base trusts the GOPe. I am shocked at their seeming hatred for their own voters. I just befuddles me. I’m not sure how they expect them to ever trust them again after so many have just mistreated them. Like Trump or not, he won fair and square. He spanked all the big name candidates. The leadership calls them names, lies to their face and still expects them to rollover like stupid dogs.

I just don’t get it.

Counter-question: _Should_ the GOP maintain it’s majority, given it’s willingness – nay, enthusiasm – for caving in to the Dems at every opportunity…