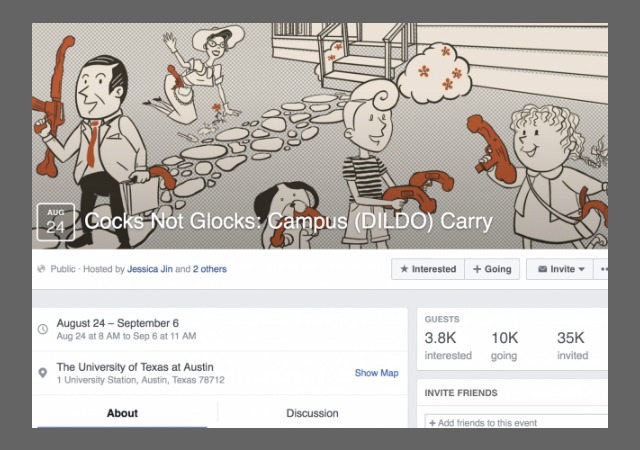 Last year, students at the University of Texas organized a “Cocks for Glocks” rally to protest the upcoming implementation of Texas “Campus Carry” laws.

Campus carry, a law that extends concealed carry privileges to license holders on university campuses, was signed into law by Texas Governor Abbott this year.

Yeah, we don’t get it either.

According to the Texas Tribune:

Cocks Not Glocks, a protest group formed last fall, is urging students and others to openly carry the sex toys around campus, offering a multicolored counterpoint to the concealed weapons that holders of handgun licenses can now legally carry inside UT classrooms and most buildings.

“We want to make sure that students don’t just go home and take these [sex toys] as a joke,” López said.

Event organizers were also selling t-shirts for $15 a pop to help benefit their group as well as University Democrats and Students Against Campus Carry.

What I am curious about — why do modern feminists insist on perpetual victimhood? Isn’t that, you know, the opposite of feminism?

OK. That could be a Freudian slip. Or camisole. Maybe a whole ensemble.

Anyhow, we have to love how the Collective makes themselves ridiculous. None of us could possibly do a better job at parody.

Kind of. You need to be licensed to Open Carry a pistol in Texas. Open carry has been pretty well the law around here for a while for long-guns, but the pistol rules about it were kind of vague, and open to misinterpretation in places like Austin.

Basically the Legislature here clarified the criminal trespass rules in such a way to make open carry permitted on any public or private grounds that do not display a particular section of the legislative code (complete with a size-of-notice requirement of letters at least 1 inch in height, English & Spanish requirement, and must be conspicuously displayed at EVERY entrance to the property) telling the patron that they are forbidden to carry in that location. Also, you can only open carry on your hip or shoulder.

Effectively what it does is allow firearms owners to avoid “trespassing” charges if their concealed weapon becomes visible and somebody complains, because the store didn’t post the proper language regarding both concealed and open-carry.

Posting PC 30.06 sign ONLY means no CONCEAL carry on premises but open carry is allowed

Posting PC 30.07 sign ONLY means no OPEN carry on premises but conceal carry is allowed.

Posting both PC 30.06 & PC 30.07 signs means neither CONCEAL carry NOR OPEN carry are allowed on the premises.

Also, the LANGUAGE of the sign changed slightly, so if the premises doesn’t have the corrected sign ~language~, the charge won’t stick (but you’ll still likely end up fighting it if the ADA wants to fight it out).

Only from the minds of liberals.

The Scottish Play had it right: It is a tale. Told by an idiot, full of sound and fury, signifying nothing.

Concealed carry? Do you need a licence?

Sexist unless they have a concealed vagina option. Also, how about the trans sexual what do they get to carry. One, both or none?

2016 Fall Tuition – $14,000
There’s got to be some parents out there who are really proud of their little snowflakes.

I do really have to ask why displaying a replica of male genitalia isn’t rape, a micro aggression or symbolic of the cys male oppression?
( OMG, I just used the letters cys in a sentence. I say letters, because you can’t convince me that’s a real world.)

It’s “cis-“, which is a perfectly cromulent English suffix meaning “this side”, as in Cisjordan, which is what they now call the “West Bank”, or “cisalpine”, which means “south of the Alps”. It’s the opposite of “trans-“, meaning “the other side”, as in Transjordan, which is now just called “Jordan”, or “transalpine”, which means “north of the Alps”. Thus the opposite of transsexual is cissexual, otherwise known as “normal”.

Thank you for the English lesson. That was my new thing to learn for today.

This could be a hoot.

THEN let’s see just how fast the feminist types start screaming about how ‘sexst’ it is.

It would be epic.

No the book would be one word, Stupidity.

They can’t be serious.

Scalpels with a retractable blade for the female chauvinist forced to defend her life in case of a spontaneous pregnancy.

Then again, that suggestion may be suggestive.

This is caused by Daily Show activism. A group of people raised on political commentary based around mockery.

This is how they’ve learned to deal with disagreements. Mock it.

But they’re not mocking anything.

If they were carrying concealed water pistols which leaked and dribbled on the floor—and thus leaving their mark, otherwise difficult to do with anything concealed—as they were sleeping through lectures, that might be mockery.

At a certain age, some tend to associate anything even peripherally associated with sex as being automatically in the realm of maturity. Ergo, parading around with rubber novelties is a terribly adult statement of political import.

On the other hand, nobody has ever offered an intellectually respectable justification for lowering the voting age to 18.

As well they should, but we can still laugh at them for being idiots and mock them relentlessly.

Well, THAT oughta piss off the dildo-packers.

Ooh! Ooh! I like the AR platform version, stage right.

Probably can’t get one in Massachusetts, though. Bummer.

The criminals have been packing concealed weapons for decades on campus. So these “students” act (they are just acting, aren’t they?) like idiots when the good men and women start carrying?

The world has gone totally mental. This kind of stupid just gives me a headache. *sigh*

As bad as this behavior is, just imagine what it will be like under hillary! No law enforcement of leftists/BLM/illegals that cause enormous harm and damage to our country but a savage attack on the first and second amendments. Free college and “Taxing the rich” will be the new mantra. But wait! The clinton foundation is not taxable so their wealth will remain untouched! But you and me, well we know how that will play out.

If you are going to carry on campus, carry extremely discretely. Consider using a retention holster and becoming proficient in its use, and learning some weapon retention techniques. There will be Libturd nutcases who will try to provoke an incident, or try to disarm you. This has already happened in the off-campus world, and there are several Internet turds promising to attack CCW wearers.

An attempted disarm is a deadly force attack, and warrants a deadly force response. While the attacking Libturds’ lives don’t matter, it would still create a nasty incident that we don’t need, and could become a personal disaster. For all the loose talk out there, we really don’t want to have to shoot anyone.

Be careful out there.

The dildo-carriers will tire of their little spasm in a couple of days. The concealed carry folks will continue to carry. They really meant it when they applied for their license.

And the world will move on. It always does.