Her father was with her on her special day. 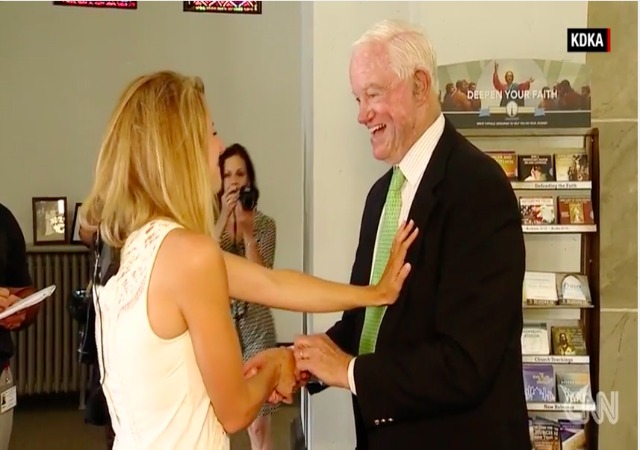 Jeni Stepien lost her father in 2006, but the man who received her heart walked her down the aisle at her wedding.

Wow. Get out the tissue. Amazing. <3 Jeni Stepien's father was murdered 10 years ago, but his heart saved… https://t.co/EzAMr67meb

A mugger murdered her father Paul, but the family donated his organs to allow others to live. Arthur Thomas received his heart after waiting 16 years for the organ.

The family remained in touch with Thomas and his family since he received the heart. However, they never met him in person. That changed when Jeni wrote him a letter:

“Jeni wrote me a letter, and she said ‘Tom, I’m the daughter of the man whose heart’s inside you, and I’m going to get married on August 6th. One further thing, if you’re willing – would you walk me down the aisle?'” said heart transplant recipient Arthur Thomas.

Thomas got the okay from his daughter, and the rest is history.

“First person I’ll ever be walking down the aisle,” Thomas says.

Jeni hugged him and immediately put her hands on the heart. She felt her father’s heart beating:

“I was just so thankful that my dad could be here with us today in spirit and a piece of his physical being as well. That was really special for us,” she said.

Thanks. I was going to play grand theft auto now my eyes are all blurry.

Hey, Paul! You did good. Twice.

We really need more stories like this. This is the real America. Politics are only a part of us as a people.

As long as there isn’t an incentive to abortion including euthanasia, then donating their organs, cells, etc., should be an individual choice.

Man, right in the feels.