And his First World problems 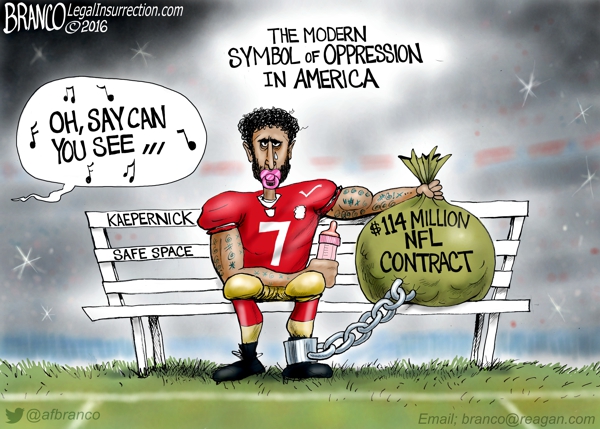 You nailed it again! The pacifier was a good touch.

Your cartoon is oppressing him, Branco!

The old joke was, I went to a fight and a hockey game broke out.

I guess the new joke will be, I went to a political protest and a football game broke out.

I particularly like how he is converting to the religion that ran the African Slave Trade for centuries and is the only one still enthusiastically supporting Human Slavery today.

Blacks are only about 12% of the entire U.S. population, but 40% of all cop killers in the U.S. are black. Despite this, the government’s own statistics show that blacks are actually less likely to be killed by cops than white or hispanic suspects.

Kaepernick, like many other weak and ignorant people, has allowed himself to be brain-washed by our irresponsible and hyper-partisan media. Twice as many whites are killed by cops in the U.S. as blacks (even though blacks commit far more violent crimes than whites), so why isn’t Kaepernick outraged by that? Oh, that’s right, Kaepernick doesn’t have a clue about that because the media has never spot-lighted any of those killings and provided round-the-clock saturation coverage in an attempt to gin up racial outrage and steer votes to Democrats.

I read where Kaepernick converted to Islam last month. Figures…

Too many hits to the head and not much material inside

Forget about this moron. Say a prayer for Pat Tillman’s family instead of remember those who gave their lives for out great country.

The artwork/message is spot on, as usual, esp. the binkie.

My own thought is that the NFL should quietly insist Mr. Kapaernick wait in a safe space near the locker room, until the offensive National Anthem is finished, then have him enter the field, accompanied by his liberal ideology. No more photos of him sitting, no more press.
It is for his own protection. /

Just another example of a person’s ability to talk faster than they can think.