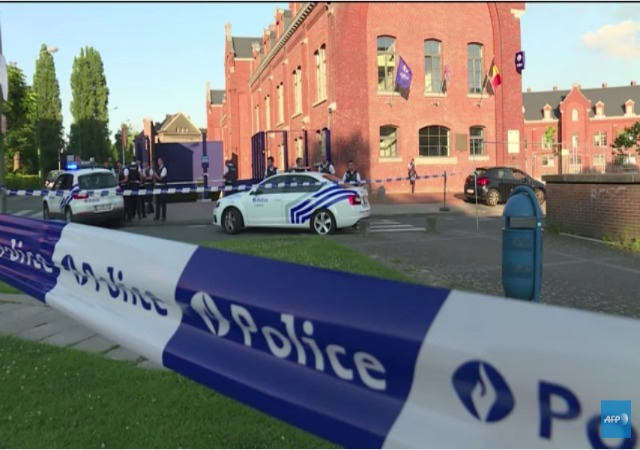 The Belgium government has opened a terrorism investigation into the machete attack on Saturday that injured two female cops in Charleroi. A third cop shot and killed the attacker.

The attacker, a 33-year-old Algerian, yelled “Allahu Akbar!” when he attacked the females. The Islamic State has claimed responsibility for the man.

Authorities said the man did not carry “explosives or any other weapons,” but they did not about him since he has resided in Belgium since 2012. The government told him TWICE to leave Belgium. TWICE. Prime Minister Charles Michel claimed the government has a hard time persuading “Algeria to accept the return of its nationals.

They did not say if they have discovered accomplices or if the attack was part of something bigger:

The office said two police searches were carried out overnight in the southern Belgian city, but that no further information about the investigation would be made public.

However, they said “he wasn’t known to have any terror links.” But that didn’t stop ISIS from claiming responsibility:

The assailant, shot by a third officer, died later in a hospital. A statement by the IS-affiliated Aamaq News Agency, posted Sunday on an IS-linked Twitter account, said the attack on the policewomen was in response to the “Crusader coalition’s” military campaign against IS and its self-declared caliphate in Iraq and Syria.

The terrorist organization “has also encouraged sympathizers to carry out lone-wolf attacks targeting civilians, which authorities have acknowledged are much harder to prevent.”

Michel also said that they have staged many of the security forces in Brussels, the home of the European Union and NATO, since they view it as the main target. But they’ll still review where they should more:

“We know well…that from the moment some particular measures are taken in a certain place, that can create a temptation to carry out some actions in other places,” he said. “We take that into account…as much as we can.”

Brussels is still seen as a target. In June, police here made a series of arrests prompted by fears that radicalized men were planning to attack people gathered in cafes and bars to watch the European soccer tournament.

Authorities said the general threat level was being kept at 3, one notch below the maximum. Mr. Michel also said Belgian authorities would work with police unions to increase security for officers, who have been targeted in other recent attacks across Europe.

This is a good time to point out that Islam has always exploited the Mentally ill for their terror attacks. The term assassin originated because Muslims got their followers stoned on hasheesh and sent them on suicide missions. They were hasheeshians.

When we see mentally ill people blowing themselves up for Allah you have to ask yourself if mentally stable people would do that.

It seems that Chief Wiggam is in charge of the investigation. It reminds me of the Bart Simpson’s Dracula episode. Kent Brockman announced on TV that a dead body with two teeth marks on it’s neck was found and drained of blood. A cape was found next to the body with the word Dracula on it. Despite this Brockman announces “Police are baffled!”
So just to be sure, Wiggam orders the destruction of the Egyptian wing of the Springfield Museum.

After Obama, Clinton’s social justice adventures through the Middle East and Ukraine, it’s only fair that men, women, children, and priests suffer for the adventurers’ efforts to coverup the consequences of their anti-native policies.