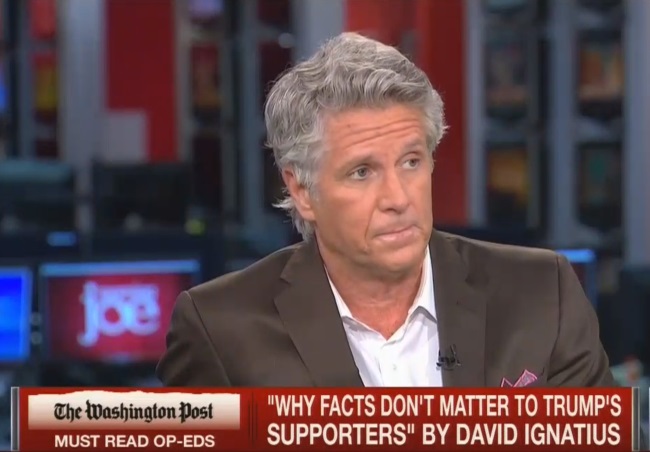 Will Islamic terrorists launch a major pre-election attack to help elect Donald Trump? That’s the scenario Donny Deutsch floated on today’s Morning Joe. Deutsch is an ad man/Hamptons playboy. His pronouncements on national security and terrorism might thus be taken with a major grain of salt. But Deutsch was responding to a statement by Wapo’s David Ignatius, a serious student of foreign affairs, who said a major attack could be a “game changer” that would aid Trump.

Deutsch said if “the terrorists and the radical Islamists want Trump in there. And if the way Trump gets in there is a terrorist attack thus, I get scared.” The always-emotive Mika Brzezinski could be heard emitting a major sigh.

What do Legal Insurrection readers think? Do the Islamic terrorists really want Trump? And would a major attack help him?

DAVID IGNATIUS: If we have a major terrorist attack in the United States between now and election day, I think you’re in a very different situation. It plays to Donald Trump’s strengths, it will be difficult for the Democrats, difficult for President Obama. That must be something that they think may in the end be a game changer for them.

DONNY DEUTSCH: Which is really scary and Tom Friedman wrote about this a couple months ago and I’ve been feeling this way. You know the jihadists and the fundamentalists want Trump in there. Because they want a guy representing our country dividing the world and saying Muslims are this and Muslims are that. And if you do that math, the same way they want Netanyahu in there, they want the hard-liner in there. And to David’s point and I agree, the thing that would really help Trump is a terrorist attack. So then you go, wow, is this a fait accompli then? Is there, I don’t want to start to frighten people. But if you do the math, and you go the terrorists and the radical Islamists want Trump in there. And if the way Trump gets in there is a terrorist attack thus, I get scared.

DEUTSCH: And I don’t want to — you really start to do that logic and it’s frightening.

“You know the jihadists and the fundamentalists want Trump in there.” Loony Donny Deutsch

Let me get this straight the Russians, Putin and now the radical Islamist Terrorists all want Trump elected!

Progressive thinking is such a debilitating disease.

In the Immortal words of Buggs Bunny – “What an asshole.. I mean maroon.”

Why is that unthinkable? Just because Putin and ISIS are different versions of anti-democratic, intolerant forces doesn’t lead to the inference that they must favor different candidates.

I can think of a number of reasons why each would prefer Trump. But why should I bother to enumerate them when you think you dismiss the possibility without any rationale.

There is so much air time devoted to Trump the talking heads have run dry two times over. Now they are just vapid and stupid – or is it that they are just MORE vapid?

Seems like an extremely easy job with great pay. Maybe I should try to get one.

“the terrorists and the radical Islamists want Trump in there”

The advantage for the us regarding the media is the only way we are aware of their presence is when they write or speak. So the nature of their work gives us ample opportunity to determine their state of mind. And I find most are not insane – they are just obsessively partisan. So the contortions to prove a point are often laughable. And many are crafty to the point of being blatantly deceitful, if not evil given intent.

On the other hand, people in the elected class high behind hyperbole and spin, and control a good deal of their public presence. And if they are of the right mind/ideology, they get unlimited media support to keep hidden their real state of mind – what they are thinking and their real intent.

Insane of just drugged up. Somebody is buying all those drugs. When Trump gets Mexico to build the wall, it will make drug prices go up. So the cartels want Trump elected too. It is amazing that all those evil factions support The Donald just like the majority of Americans who have functioning brains. LOL!

PS. He made Mika sigh. It must he a heavenly sign! Todays journalists should be named that because they were told to hit the road by the public.

Trumps largest block of supporters are relatively poor and under-educated. Trump argues that the proof he is smart and competent is that he is rich.

“Trumps largest block of supporters are relatively poor and under-educated.”

Trumps largest block of trump haters are stupid and un-educated.

Not according to the polls. I guess you would argue that people without college educations are generally smarter than those who do. I am not talking about every last case; just generally.

The irony is that a lot of them used to be able to make a good living because they had union jobs.

The irony is that they acknowledge that Democrats are wussies when it comes to terrorism, national defense, and Russian expansion. By trying to create rumors against Trump, they are admitting that Clinton wouldn’t do anything about it.

The point was that Trump threatened not to honor our NATO commitments. Yes,I know he said if they didn’t pay their bills. But even threatening to not hour the treaty put a chill in frontline NATO nations and warmed Putin’s heart.

Look who Putin has invaded: Georgia and Ukraine. Neither is a NATO member. You know who he didn’t invade after threatening? Estonia … Guess why.

Of hand, thoughtless comments like Trump’s have consequences. Saying that he would renegotiate our debt has consequences. He may have a rabid fan base, but the rest of us are scared sheetless of what he doesn’t understand.

Early on with MSNBC Rush banned them as worth commenting on. He did it because MSNBC had very low viewership numbers & were therefore not worth talking about. And also because what MSNBC’s subject matter was so predictable,& boring that if he were to give them airtime & notice it would both advance their visibility while driving his own numbers down.
Wise choice.
Yet virtually every morning L.I. ledes with a piece about what’s been said on Morning Joe.

Ps.
A much wiser choice of topic would have been how Kansas republican voters have just roundly rejected the Sam Brownback conservative wing that’s been running state governance for several years now. Tim Foolschump, a founding member of the ill-starred “Freedom Caucus” was one of those rejected in that house-cleaning.

If “principled conservatism” is supposedly such a no-brainer, if Ted Cruz would have been a lock to be elected in preference to the actual candidate chosen, why has Sam Brownbeck conservatism been so roundly rejected in Conservative Kansas?

How about the really huge drop in the price of gas meant to help Hillary? Can you name the country helping her?

History tells us that when Texas was admitted into the Union, certain provisions, IMMIC, were unique to that admission in 1845.

Still, after 1865, how did Congress’s requirements for re-certification, Reconstruction, of the Confederate States, allowing them to be represented effect those original provisions of Texas’ admission into the Union?

One point of view might be that when Texas joined the Confederacy, those original provisions were negated. Has the subject of Texit ever been discussed by legal scholars, especially in regard to Texas’ certification in 1870?

In 1836, Davey Crockett was our legal scholar.

So, one candidate is helping terrorists and their sponsors to get the A-Bomb, and is willing to continue contributing money and support.
The other candidate SAID that he would bomb the heck out of them.

Which candidate did you say the terrorists support, again?

I’m sorry I thought that I cam to LegalInsurrection. Seems like this is Scarbourough Fair.

More people read/heard this on Legal Insurrection than saw it on the tube.

Well, let’s see … what Forces of Evil have they tried to claim wanted a President Trump?

White supremacists. That doesn’t seem to have gotten anyone too excited.

The Russians. They get a gold star for effort in trying to whip up something there, but it never gained traction outside of the editorial office.

Who’s left? Hey, how about The Terrorists?

They’re desperate; Hillary nearly went catatonic this week when confronted by PETA hecklers. By comparison, she’ll make Captain Queeg look sound and competent if she ever gets dragooned into a debate. Picture it; Hurricane Donald throws a punch, Hillary gets a stunned “deer in the headlights” look, then fixes her gaze down at the podium; if she recovers at all, it will be to give that dismissive double hand wave, then to cackle a bit … by which time, Trump is ready with punch number two. And number three. And four. And they all know that this is how it’s going to play out. No wonder they’re desperate.

So much stupid, so little time.

Let’s see … Who do I want as a jihadist or terrorist?

The sad thing is this list goes on for pages.

So so so much stupid, so few opportunities to parachute these media personalities into ISIS territory on a one-way ticket.

Is it Donnie Duetsch,or Donnie Douche.
It would not work anyway the press would blame it on a video produced by Donald Trump

This piece from msnbc belongs down there with the piece from cnn about Trump eating KFC with a knife and fork! Come on Professor, raise the bar a little bit. How about a piece on Anthony “Carlos Danger” Weiner?

Anthony “Carlos Danger” Weiner….Just be glad he doesn’t live in a state with open carry.

The prophets speak of mass abortion and refugee crises in the Middle East raising a new leader of Western civilization.

No, they hate Trump as much as they hate you, Dope.