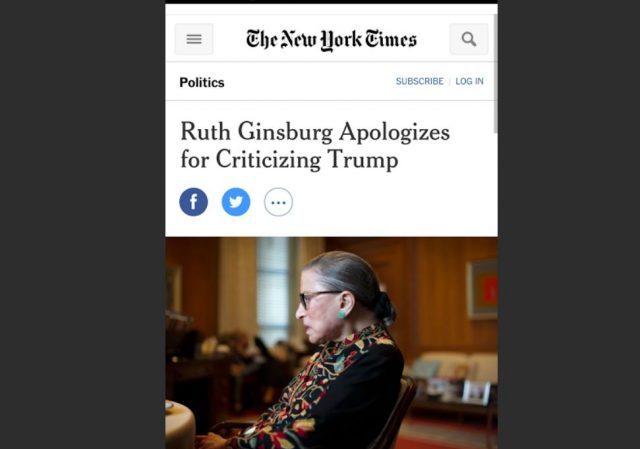 She is adored and worshipped as incorporating intellectual finesse and dignity in comparison to conservative Justices, Republicans, the Tea Party, and most of all, the person liberals regularly compare to Hitler, Mr. Donald J. Trump.

So how to describe what liberals must be going through today, as Notorious RBG is forced by public opinion and editorial Boards at places such as The NY Times and USA Today to recant and retract her attacks on Mr. Donald J. Trump.

Justice Ruth Bader Ginsburg of the Supreme Court on Thursday apologized for her recent remarks about the candidacy of Donald J. Trump, saying they were “ill-advised.”

Justice Ginsburg on Tuesday called Mr. Trump “a faker” who “really has an ego” and said he had been treated too gently by the press. Mr. Trump, she said, “says whatever comes into his head at the moment” and has no consistency in his thinking. She also made critical remarks in interviews with The New York Times and The Associated Press.

“On reflection, my recent remarks in response to press inquiries were ill-advised and I regret making them,” Justice Ginsburg said in a statement. “Judges should avoid commenting on a candidate for public office. In the future I will be more circumspect.”

Many people are saying it’s not an apology TO TRUMP, so she hasn’t been prostrated before the alter of Trump. Or that it’s not even an apology.

Keep believing that. Notorious RBG has been humuliated in front of the greatest evil in the current liberal world.

Being a liberal is never having to say your sorry.

What exception applies to Ginsburg then?

Did she use the word ‘apologize?’ From what I saw she ‘regretted’ making the statements and in the future promised to be more ‘circumspect.’

So basically she’s sorry she got called out and verbally bitch-slapped, but not sorry for what she thought or said. In other words, a typical prog ‘apology.’

Yea, I see her statement being more akin to “I’m sorry that I got caught.” Or “I am sorry you were offended.”, which are far different from saying; “I apologize for what I said.”

They reminded the Justice that the Democrats might want to throw this election to the SCOTUS. She is apologizing now so she will not have to recuse herself later.

The only question which matters is whether she will recuse herself in issues involving the election, and afterwards in case of a Trump win? All she really said is that she should have kept her mouth shut about her biases.

The Supremes are not expected to be without “bias”, or “opinions”. They are just human.

They ARE expected to maintain the distance between the law and gutter politics by not engaging in the latter. This is the line the Ginsberger crossed.

She did not rightly owe any “apology” to T-rump. She owed an apology to the American people and the entire legal profession.

As to opinions, I know that Scalia and T-rump were at swords-points on various issues, and neither was a fan of the other, despite T-rump’s lies to the contrary. Look it up.

I did. It appears you are “making it up”. How surprising.

No one see’s everything the same way.

“and neither was a fan of the other, despite T-rump’s lies to the contrary.”

Put up or shut up you lying sack of shit.

Gun Control Politifact rates as a full flipflop, which is true.

1st Amendment; Wants to be able to sue reporters.

Who knows he has more positions than a yoga instructor.

Gay Marriage- this is another one of those yoga instructor things.

As far as Scalia they had their run in’s over the years.

Now I know you are to brainwashed to actually believe any of this but do try to see past the Orange colored glasses.

“Now I know you are to brainwashed…”

Apparently you are as poor a reader as ragspiss. I said in my comment there were differences of opinion. The dimb bulb known as ragspiss claims : “and neither was a fan of the other, despite T-rump’s lies to the contrary. Look it up.”

Your pissy redstate reference does nothing to support this. It is nothing more than trump expressing a different opinion than Scalia held, nothing more.

You nevertrumpers have created a monster in your own heads, you lose at every turn, and it is apparent to anyone with a functioning brain cell that your hatred blinds you to any truth. You need Glen Beck for counseling.

You will say anything in service to your anti trump vendetta, any lie, and when called on it, you can only state “brainwashing”.

There are brainwashed people all right. Go look in the mirror to see an ugly example of one.

No I read quite well actually, that is why I am wondering why you are using Rags statements towards me. I never said they hated each other, my exact words were; “As far as Scalia they had their run in’s over the years.”

I also note that you conveniently ignore every other point I make about your Orange god.

“You will say anything in service to your anti trump vendetta, any lie,”

“There are brainwashed people all right. Go look in the mirror to see an ugly example of one.”

Huh? Oh, did I leave an “o” off somewhere? OMG a simple grammatical error! Whatever will I do!?! God forgive me!

Many people are saying it’s not an apology TO TRUMP, so she hasn’t been prostrated before the alter of Trump. Or that it’s not even an apology.

She at least seems to be acknowledging that she should at least try to go by the same code of conduct as judges in lower courts.

First, a lot of Collectivists criticized Ruthie over her lack of judicial decorum. She was WAY over the line.

Second, Collectivists don’t worry about crap like an “apology” from one of their principal field generals. If you ask one about this incident next month, they’ll look at you like your dog does when you ask about that unfortunate incident with the carpet last year.

For someone to regret an action or statement, they actually have to have some ethic’s and/or morals. Something that is severely lacking in today’s liberals.

I think the Bernie Madoff of the New GOP, Trump, should sue RBG. He needs the money to pay his debts off before he is crowned Mr. America.
~~~
“Justice Ginsburg on Tuesday called Mr. Trump “a faker” who “really has an ego” and said he had been treated too gently by the press. Mr. Trump, she said, “says whatever comes into his head at the moment” and has no consistency in his thinking.”

I concur with this opinion.

“I concur with this opinion.”

Of course you would. You and Ginsberg are much alike.

How so, Barry Obama?

You’re the one agreeing with Ginsburg. Good company you keep.

“by their enemies you shall know them”

Not good enough. She needs to resign.

She is entering dementia in her old age. There needs to be an intervention. Scalia would have done this but now he’s dead.

She is literally rotting in her shoes.

Oh come on, just because she had too much to drink and fell asleep during the state of the union by the POTUS.

So RBG proves herself to be a better person then Ragspierre.

In what regard, T-rump sucker?

On reflection, my recent remarks in response to press inquiries were ill-advised and I regret making them.
I doubt that last bit would hold up to a polygraph test.

I think better of her, for this. For her to actually make a second public statement was significant.

And, I am willing to bet that she has yet to watch a single speech by Donald Trump. She has very likely read the third-party reports on the news, and not bothered to educate herself on the subject. This is not what I would expect from a Supreme Court Justice, who should by now know better.

This week, who can say about next week.

Brawlers know the rules of the street far better than establishmentarians. The Senate is not The Apprentice, and politics is not New York real estate. Ask the trash-talking Justice Ruth Bader Ginsburg if she came out on top in dueling with Trump — or whether she virtually destroyed a quarter-century’s reputation in minutes and ended up no better than an elderly version of Rosie O’Donnell in a Supreme Court Justice costume.