Pages highlight ties between hijackers and Saudi nationals with ties to the kingdom. 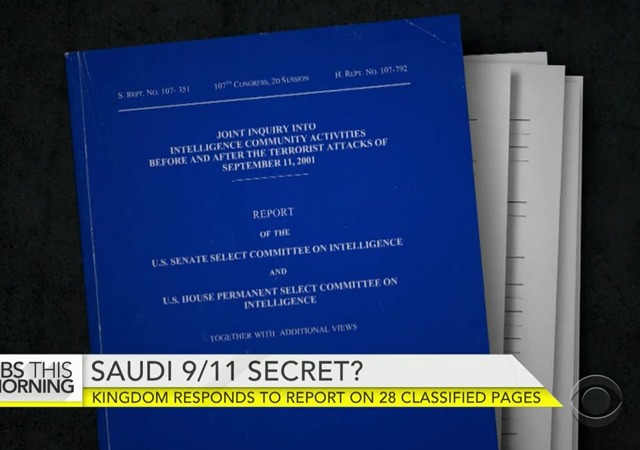 The U.S. Congress has released 28 pages about the 9/11 attacks that discuss potential Saudi Arabia ties to the terrorist attack. The papers remained classified for 13 years after the investigation by the House and Senate Intelligence Committees. They found:

According to sources familiar with the documents, the information in the pages lays out a number of circumstances that suggest it’s possible two of the 9/11 hijackers living in California in the months leading up to the attack were receiving operational support from individuals loyal to Saudi Arabia.

But intelligence officials say the information was preliminary, fragmented and unfinished data that was subsequently investigated along with more complete information in subsequent 9/11 investigations.

The 2004 U.S. commission report said they could not find any evidence that linked Saudi officials or the government to al-Qaeda:

“It does not appear that any government other than the Taliban financially supported al Qaeda before 9/11, although some governments may have contained al Qaeda sympathizers who turned a blind eye to al Qaeda’s fundraising activities,” the 9/11 Commission report reads. “Saudi Arabia has long been considered the primary source of al Qaeda funding, but we have found no evidence that the Saudi government as an institution or senior Saudi officials individually funded the organization. (This conclusion does not exclude the likelihood that charities with significant Saudi government sponsorship diverted funds to al Qaeda.)”

Fifteen of the 19 hijackers on 9/11 were citizens of Saudi Arabia.

Hijackers Nawaf al-Hazmi and Khalid al-Mihdhar, who flew a plane into the Pentagon, resided in California before they attacked the World Trade Center. Saudi national Omar al-Bayoumi “helped the two men find an apartment in San Diego and cosigned their lease.” A document released last year stated that al-Bouyoumi has “ties to the Saudi Government and many in the local Muslim community in San Diego believed that he was a Saudi intelligence officer.”

In April, Saudi Arabia threatened “economic fallout” if the U.S. passed a bill that would allow American courts to hold the kingdom responsible over any role in 9/11. Foreign Minister Adel al-Jubeir claimed the kingdom would “sell up to $750 billion in treasury securities and other assets in the United States before they could be in danger of being frozen by American courts.”

Experts remained skeptical of the Saudi threats, which also did not work on Congress. The Senate passed the bill even though President Barack Obama has said he would veto it.

OK Main-Stream-Media, time for you to investigate Huma Abedin in relation to this story.

You know, the basic “who, what, when, where, why and how” that kids learn to write about in the 7th grade.

In other words, do your fucking job.

She interned. It’s a matter of public record?

That doesn’t really answer my questions now does it?

The most “reputable” news source I see asking these questions is Breitbart. CBS, NBC, ABC, Fox, CNN, Wapo, NYT, et al seem to be silent on it.

The House Of Saud is YUUUUUUGE, and hardly homogeneous. They ALL have money, but they range from Western playboys to Wahhabi fanatics. With some hybrids in the mix…