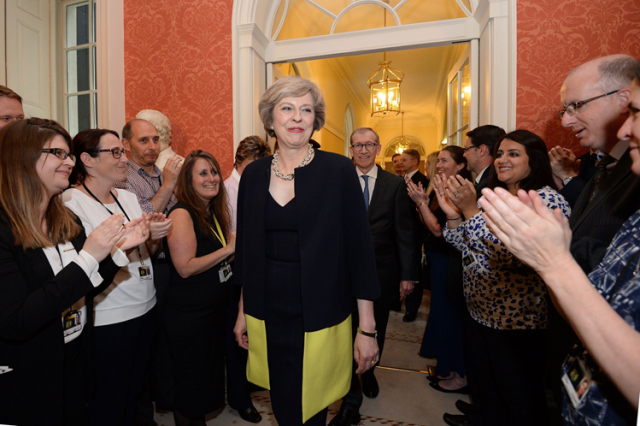 One of the new pieces of good news coming from Europe last week was from Great Britain.

In the wake of the #Brexit vote, U.K.’s new Prime Minister felt empowered to shut an entire government department.

British Prime Minister Theresa May has been facing criticism during her first few days in office over her decision to close the U.K. Department of Energy and Climate Change.

The closure was reported on Thursday, May’s first full day in office after the departure of David Cameron.

The unit will actually be folded into an expanded Department of Business, Energy and Industrial Strategy under Greg Clark.

It comes at a time when campaigners are urging the government to ratify the Paris climate change deal.

In his statement, Mr Clark appeared keen to calm concerns about the priority given to tackling global warming.

He said: “I am thrilled to have been appointed to lead this new department charged with delivering a comprehensive industrial strategy, leading Government’s relationship with business, furthering our world-class science base, delivering affordable, clean energy and tackling climate change.”

Of course, the usual suspects are complaining.

…Ed Davey, who served as Liberal Democrat secretary of state at Decc between 2012 and 2015, criticised the decision.

“This is a major setback for the UK’s climate change efforts. Greg Clark may be nice and he may even be green, but by downgrading the Whitehall status of climate change, Theresa May has hit low carbon investor confidence yet again,” he told the Guardian.

His view was echoed by Ed Miliband, the department’s first secretary of state when it was created in 2008 by Labour, who tweeted that the move was: “Plain stupid. Climate not even mentioned in new dept title. Matters because depts shape priorities, shape outcomes.”

The eco-activist angst on Twitter may actually be responsible for raising global temperatures…given how much it warms my cold, skeptical heart.

Tories the only environment they want to preserve is the financial enviroment for the elites. #CabinetReshuffle https://t.co/eymMQgGFQS

Harry Leslie Smith may want to have a chat with Bank of England Governor Mark Carney, who considers climate change rules an opportunity to divert “$7 trillion” British dollars through regulations.

I have no words. Is Theresa May just happily ignorant? Cheers Cameron, your ego has let these eejits in. https://t.co/h2dpryG6du

A lot of American liberals are feeling the same way across the pond.

UK closes climate change agency, as govt apparently plans not only to exit Europe but the planet as well https://t.co/bPbWnc2cLp

Bill McKibben can console himself that several Earth-like planets may be among the 100-plus newly confirmed exo-planets.

One of the more unkind tweets basically accuses her of acting like President Obama:

Great news! She’s only been PM a day and already climate change isn’t a problem! https://t.co/PFFammbMQO

After nearly 8 years of his presidency, surely the sea levels have returned to normal!

In the wake of this aggressive move, many Americans are rethinking their election plans a a result!

Climate change department closed by British PM Theresa May
-Is there time to get her on the ballot here?? #MMGW https://t.co/2HthjNBZSf

I would settle for a few department closures instead.

Would that President Trump follow suit and close down the EPA.

The government’s proper role is to provide oversight of the private sector. Everything is potentially dual-use, including the EPA, scalpels, guns, etc.

Under the Constitution, the only “business” Congress has to mind it its own. The point of the Constitution was to create a government that didn’t interfere with either the business or personal pursuits of State citizens.

It would be a good first step. Department of Education next.

And the Department of Energy.

We have a national scandal brewing because the EPA no longer cares if we get lead in our city drinking water
http://www.9and10news.com/story/32471435/michigan-attorney-general-discusses-flint-water-crisis-at-republican-national-convention
and no, Flint is not the only place this is happening.
http://gizmodo.com/report-every-major-us-city-east-of-the-mississippi-i-1754573026

Ah, but the EPA is hellbent on destroying the coal and oil & gas industries, which it justifies by reducing carbon dioxide, a non-pollutant essential to life on our planet.

The EPA has a role in our government: Congress needs to give it direction toward goals that will actually serve the environment.

The EPA was created before the states had such agencies. It no longer has a purpose so it will always be trying to create one. Besides, I do not want the DC ruling class “fixing” the EPA. End it. Texas has its own and it is honest.

A catastrophic anthropogenic climate change… for scientific mystics, “green” industry, environmentalist lobbies, and opportunistic politicians. People are rejecting the gods from the twilight zone, their liberal judges, and leftist lackeys. The Pro-Choice Church has a brittle foundation.

Now that is a progressive move!

I like her way of thinking. I hope we are so lucky.

If you campaign for him, you get to hold him accountable. Just saying.

Progressive heads are exploding right now.
How dare she…………..
The screams coming from the wacky man made global warming
folks will be deafening.

The scheme is falling apart.

Talk about kicking progressives in the teeth. I like this woman. She won’t be seeing Barry soon.

She’s not eliminating it.

That may be good, or it may be bad. Absolutely no way to tell at present.

i agree, she’s just making its activities less transparent. That’s what untrustworthy politicians do. And she’s an advocate of the destruction of Britain through open borders just like Sweden’s politicians are doing in Sweden (though she wouldn’t characterize it that way).

Good. Shut all of the climate change advocates down.
It’s the biggest scam in the modern age.
Sure the earth is warming, however it is 1) not warming catastrophically, and 2) not certain that we are causing it.
Moreso, the earth has not warmed at all in the last 20 years, according to our best satellite data.

It’s a liberal wild-grab for power and tax money to support their socialist agendas.

As a well respected research chemist (as judged by my publication list and the awards I have been kindly awarded) who has been closely following the climate change debate, I can tell you that there are several populations out there.
>
One population are the scientists who perform research for the sake of finding scientific reality. There are those who “support” anthropogenic global warming (AGW) and those that do not. Surprisingly these two populations agree on quite a bit. They agree that the climate is changing and that the climate has been changing since the Earth was created. They agree that man’s activities have affected the climate, but that the change ranges from minor to trivial as compared to other effectors such as orbit variations, changes in solar output, and so forth. They also agree that attempting to reverse this change would be catastrophically expensive with little gain for the overall expense. They also agree that more research is warranted because we know relatively little about the subject as evidenced by the models that are all grossly incorrect in their forecasting.
>
Then there is a second population. This is the public who knows little to nothing about science and can only parrot what they have been told and the fervor with which they support their beliefs is usually proportional to their political fervor.
>
Finally, there is the third group made up of politicians who need AGW to be real in order to justify their hidden agendas and those scientists who are quick to jump on the bandwagon in order to gain funding and prominence. The ideologues who believe that coal is evil and should be banned (for example) need AGW to be real in order to get the public to support their notion that the destruction of tens or hundreds of thousands of jobs is a good thing when so many are struggling to find decent employment. The researcher who is facing unemployment unless he can obtain funding for their research proposal judged to be “meritable”, which is currently running at around a 15% funding rate, will sometimes turn to supporting AGW and promise to prove AGW exists in exchange for a funding rate of 75%. Liberal newspapers gladly publish information demanding how everyone believe AGW to be real in order to sell copy to a scared public.
>
All in all, the AGW debate is based on theories and models that are still in their infant stage. The AGW issue is so large that the truly rational person knows that there is currently no substitute for fossil fuels for nothing else currently exists that provides so much energy in such a small volume and that it will be much longer before any viable substitute can be found. The population of the Earth is so great and the need to feed and care for all these people is so great that it should be obvious that efforts to curb carbon dioxide emissions will come at an enormous cost. Likewise, carbon dioxide is not a pollutant, but is, in reality, plant food and increasing carbon dioxide levels in the atmosphere is actually dramatically increasing food production. To the most rational minds, attempting to fix AGW by stopping carbon dioxide emissions is nothing short of folly and that the real answer is that, should AGW be real, then research money should be spent on looking for ways in which the Earth’s population can adapt to the changing climate.