Theresa May Will Be UK Prime Minister Wednesday, Promises to Uphold Brexit

Theresa May Will Be UK Prime Minister Wednesday, Promises to Uphold Brexit

David Cameron will resign on Wednesday. 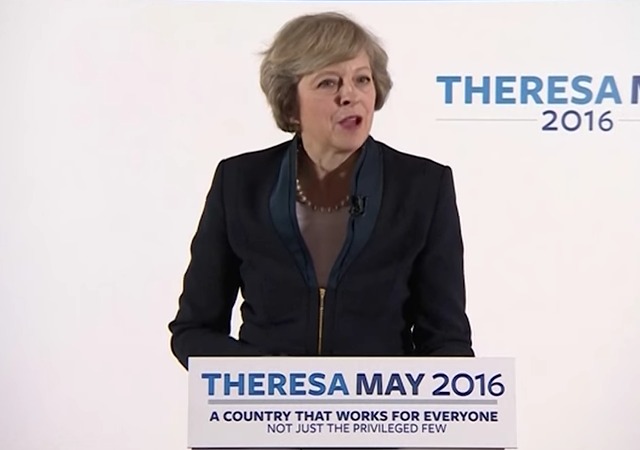 Energy Secretary Andrea Leadsom dropped out of the race for prime minister on Monday morning, leaving Home Secretary Theresa May as the only candidate left standing.

Current Prime Minister David Cameron said he will leave on Wednesday since there is no need for an election. The Conservative Party officially named May as his successor:

“Obviously, with these changes, we now don’t need to have a prolonged period of transition. And so tomorrow I will chair my last cabinet meeting. On Wednesday I will attend the House of Commons for prime minister’s questions. And then after that I expect to go to the palace and offer my resignation. So we will have a new prime minister in that building behind me by Wednesday evening,” Cameron told reporters outside 10 Downing Street on Monday.

Leadsom made her announcement early Monday morning. She said:

“We now need a new Prime Minister in place as soon as possible. Theresa May carries over 60% of support of the parliamentary party. She is ideally placed to implement Brexit for the British people and she has promised … to do so.”

In the final vote, she gathered 84 votes while May took 199. She continued:

“After careful consideration I do not believe this is sufficient to lead a strong and stable government.

“I have … concluded that the interests of our county are best served by he immediate appointment of a strong and well supported prime minister. I am therefore withdrawing from the leadership election and I wish Theresa May … success.”

Leadsom came under fire over the weekend when she said would make a better prime minister than May because she has children:

In her interview Mrs Leadsom conceded that the subject of Mrs May’s lack of children could be painful for her opponent, but pressed on. “I am sure Theresa will be really sad she doesn’t have children so I don’t want this to be ‘Andrea has children, Theresa hasn’t’, because I think that would be really horrible.”

However, she said that having children kept her focused. “It means you don’t want a downturn but, never mind, ten years hence it will all be fine. My children will be starting their lives in that next ten years so I have a real stake in the next year, the next two.”

She said these remarks even though May has said she and her husband could not have children “and she hinted of their sadness in a recent interview.”

Guto Bebb, a Tory MP, said: “I support Theresa May but these comments from Andrea Leadsom are utterly vile regardless of my position. Shameful.”

Meanwhile Tom Watson, Labour’s deputy leader, tweeted: “No matter what trouble my party is in, this is disgusting. Leadsom should not be our prime minister.”

But once the paper published the interview, Leadsom shot back on Twitter, saying The London Times misquoted her.

Truly appalling and the exact opposite of what I said. I am disgusted. https://t.co/DPFzjNmKie

@thetimes @RSylvesterTimes this is the worst gutter journalism I've ever seen. I am so angry – I can't believe this. How could you?

She reached out to May and apologized, who accepted the apology.

Leadsom backed the Brexit campaign while May campaigned to remain in the European Union with current Prime Minister David Cameron. The Tories would have voted for the new prime minister in September.

Other Tories have pushed to make May prime minister right now:

“We should now move as quickly as possible to ensure Theresa May can take over as leader. She has my full support as our next prime minister,” said [Michael Gove] the justice secretary in a statement.

Boris Johnson, the former London mayor, said he had “no doubt Theresa [May] will make an excellent party leader and prime minister” and called for the handover of power to begin “immediately”.

Even though she wanted to remain in the EU, May has promised to honor the Brexit referendum:

May, who actually supported Britain remaining in the EU, reiterated her commitment to Brexit on Monday.

This is good for the UK & US. Best wishes to our Brit cousins. This should wake up the EU, but it won’t.

Even if she implements Brexit, and it still remains to be seen if she sabotages that effort, she’s very likely to continue Cameron’s disastrous immigration policies and continue to import millions more Muslims who are busy raping English girls and taking over London. The existential threat the England has not abated and the traitors are still in power.

It’s a pity, though, that we’ve apparently reached a time when it’s unacceptable to make so obvious a point as that parenthood is an important qualification for leadership. Leadsome didn’t attack May but merely pointed to an important qualification of her own; how can that possibly be unacceptable? How is one to campaign at all if one can’t mention ones own unique qualities, the things that make one uniquely suited for the position one is seeking?

If Leadsom had said that if she ended up in No. 10 her first action would be to bomb downtown Rotterdam, or annex the Sudatenland, or mine the Dardanelles, or execute the eldest son in every household in London, that could be condemned as “utterly vile” and “shameful”. But her actual comments were hardly incendiary; rather pedestrian, actually. The overreaction seems strange, even allowing for the theatrics so de rigueur in the Westminster system.

The obvious conclusion is that it’s a put-on. The Party really, really doesn’t want Leadsom. Perhaps she was just tossed about as a possibility in the first place to avoid the appearance that the Party is pulling even more strings than usual, but she’s developing into too much of a contender and so had to be slapped down with an artificial or even imaginary faux pas. Perhaps.

No, the Party wants May; what’s more, they want her now, and so badly that they shelved Cameron’s very leisurely resignation schedule. Something is cooking.

The party wants May because she’s pro-Sharia and wants even more Islamic immmigration into Britain. The final destruction of Britain will not be stopped by the Brexit vote.