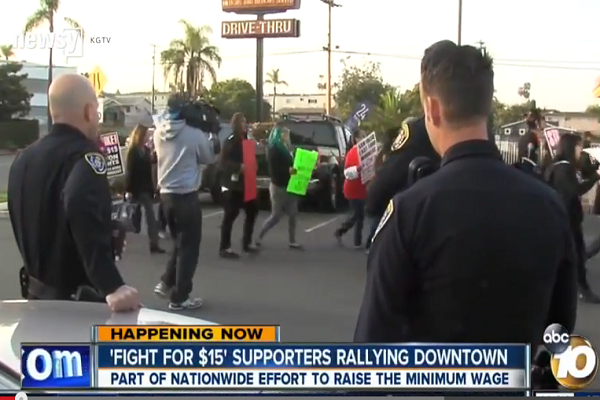 Minimum wage hikes sound great on the surface, but as we’ve been reporting here at LI, such hikes tend to do the opposite of their proponents’ stated intention.  From forcing businesses to fire employees, cut hours, and find technological replacements for workers, minimum wage hikes are counter-productive, even destructive to low-income workers.

For example, a new study from Seattle shows that “there was almost no effect on workers’ average total earnings” due to a combination of factors including fewer hours and a more difficult time finding a second job to make up those lost hours.

[T]he actual benefits to workers might have been minimal, according to a group of economists whom the city commissioned to study the minimum wage and who presented their initial findings last week.

The average hourly wage for workers affected by the increase jumped from $9.96 to $11.14, but wages likely would have increased some anyway due to Seattle’s overall economy. Meanwhile, although workers were earning more, fewer of them had a job than would have without an increase. Those who did work had fewer hours than they would have without the wage hike.

An increased minimum wage costs employers more and necessitates reducing margins and/or charging customers more.  Wages may increase for some, but the cost of goods and services rises as well . . . effectively eating into whatever gains workers lucky enough to keep their jobs and not have too high a reduction in hours might have experienced.

Increasing the minimum wage increases the costs of hiring workers. As a result, employers must accept reduced margins or customers must pay steeper prices.

If employers cannot stay in business while paying their staff more, they will either hire fewer people or give their workers fewer hours. As a result, even if wages per hour increase, workers’ total earnings could decline.

Jacob Vigdor, an economist at the University of Washington and one of the authors of the report, speculated that technology could limit the benefits of increasing the minimum wage. If it becomes easier for employers to replace their workers with machines, they will be more likely to respond to wage hikes by making fewer hires.

Overall, there was almost no effect on workers’ average total earnings, but Vigdor pointed out that the average could be misleading. The consequences for many individual workers — both positive and negative — could have been more significant.

Workers employed by thriving businesses who did not lose any hours could have enjoyed welcome gains. On the other hand, workers who had a hard time finding a second job to make up for their lost hours might have been earning much less.

In Obama’s flailing economy, black workers have arguably suffered the most.  This fact has been foregrounded by both the right and by the progressive left, and has yet to be addressed effectively by this administration. Indeed, the Obama administration and Democrats are the most vocal proponents for pushing minimum wage hikes that have a demonstrably disproportionate negative effect on America’s black youth.

Why do people think it helps economy to raise min wage? Even BET says this KILLS jobs:https://t.co/DSIldunl0s #TrumpWantsMinWageHike

Yes, Obama and Democrats are aware of this, and no, they do not develop policies that address the reality of minimum wage hikes and their measurable failure; instead, they focus on “feel good, sound good” policies that appease the masses, harm businesses, and displace workers.

Arbitrary compensation for progressive debasement of capital and labor, outsourcing and insourcing, and social justice-inspired disasters.

But it makes the so-called progressives FEEL so good about themselves now that they have DONE SOMETHING, even if the actual outcome is negative.

In that respect it’s a success.

Maybe we should consider selling the west coast to Mexico.

Sell it or give it one difficulty is that his would necessitate a really, really long wall!

Hey! The US paid Mexico good money for all that dirt—$15 million. And in 1848, that was worth something; about thirty times what it’s worth today.

I dunno why any of his advisers would be “mystified” by him being a stinking, lying, pathological Collectivist thug.

You tell em’, Hillary voter. Things will be so much better when she appoints 5 “progressives” to the Supreme Court.

How braindead do you have to be to read post about minimum wage and reply with nonsense about SCOTUS? Let’s examine a Trumpie

1) This was done with no intention at all of helping those on the bottom rung.

Most Americans are woefully ignorant when it comes to the cost of employment. An $11.00 per hour employee doesn’t cost $11.00 per hour unless you’re paying them off the books. Government loves a higher minimum wage because that results in higher FICA payments. It also increases your workers comp payments, unemployment insurance, etc…

The problem is obviously the greedy businesses. They should just pay people more, without trying to make a profit. They don’t need any more profit, they’ve made enough already!

*removes progressive thinking cap, before it causes a stroke*

it’s been a boon for the robo cashier business.

For those keeping score.

You can’t repeal the laws of supply and demand.

If a black inner city youth spends one more hour a day on the streets instead of at a job, which is more likely:
1. He picks up a broom and sweeps it up.
2. He finds himself interacting with law enforcement and the justice system.
Number two results in a significant cost to society and taxpayer that will never be picked up in the employment statistics.

This will not make one iota of difference to those clambering for a higher minimum wage simply because it does not affect them.
This is the same with any liberal cause, “it feels good to me so I do it” because it helps me be re-elected. The actual affect on the people they are claiming to help is given no consideration whatsoever.
The same with illegal aliens and refugees, bring them in because they won’t be living anywhere near me so I don’t care what the effect is on the people. It helps me get re-elected.
This can go on and on with welfare, Obama Phones, Obamacare, etc.