Scarborough: Why Not Hire Hillary, the ‘Brain Surgeon’

Scarborough: Why Not Hire Hillary, the ‘Brain Surgeon’

Brain Surgeon? Unfortunate Metaphor for the Woman Many See as Nurse Ratched 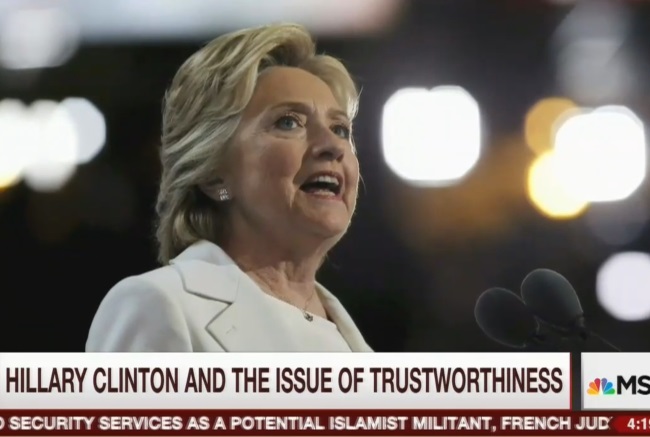 Of all the metaphors he might have picked to praise Hillary Clinton, Joe Scarborough chose the most unfortunate one: that of “brain surgeon.” Because to many people, Hillary brings to mind none other than Nurse Ratched, that cold and domineering figure who subjected one of her charges who wouldn’t fall in line to . . . a lobotomy.

On today’s Morning Joe, Scarborough actually said “why don’t we try actually hiring a brain surgeon who’s been operating on brains instead of chopping down trees for the past 30 years?” Scarborough put the words in the mouths of Hillary supporters he imagined, but was clearly expressing his own sentiment.

Note: Scarborough and others on the panel swooned over the supposedly patriotic, USA! USA!, positive, Reaganesque, shining-city-on-a-hill tone of the DNC. The party in control of the White House is naturally going to try to paint a rosy picture of the country. But the real energy at the DNC came from the Bernie fans, who buy into his deeply negative view of free markets and America at large. And the whole notion of “Stronger Together” is, when you think about it, “yes you can’t” . . . without Big Government directing and “helping” you every step of the way.

WILLIE GEIST: People look at her experience through two different lenses. You see it as an asset. All of her experience: she’s served as Secretary of State, she’s done all these things, she’s been a senator. There are people who support Donald Trump and maybe some people who are undecided who look at her experience as being an entrenched Washington experience, somebody who’s been at this a long time, just the kind of person this country doesn’t need anymore. People who want to blow up the system don’t want somebody who’s spent a life in the establishment of politics. We’ve got two very different views of the same set credentials for Hillary Clinton.

JOE SCARBOROUGH: But didn’t we try that eight years ago? I don’t, I’ve been very complimentary about Barack Obama and Michelle Obama this week. They gave speeches that actually were optimistic and hopeful in a way that Republican speeches weren’t. But Mark Halperin, we tried blowing up the system with a guy who really wasn’t prepared to be President of the United States. We got a guy who was a glorified state senator, we got a guy that went around talking about hope and change. He was going to blow up the system and start all over again. We tried that eight years ago. And there are a lot of people, certainly Republicans and independents who don’t think that worked if you look at the wrong-track numbers. I know the president’s approval ratings are very high. But we tried that.

Why don’t we try — it seems to me — I know that Hillary Clinton can’t say that, but some supporters can say, why don’t we try actually hiring a brain surgeon who’s been operating on brains instead of chopping down trees for the past 30 years? It’s not a bad idea to get somebody who’s actually experienced and knows how Washington works.

MIKA BRZEZINSKI: That would be Hillary Clinton.

Its worth remembering that the last time we had a wealthy real estate magnate and entrepreneur in the office of president, George Washington did a mighty fine job.

Brain surgeon? Ben Carson over Hillary in a heart beat!

Brain Surgeon? Hell, my local garbage man over Hillary in a heart beat.

Possibly related to the topic of Brain surgery, this gif is from last night.

Is it a seizure?

I didn’t watch the convention, but I’ve heard her reaction to the balloons was over done. Was than when this happened? If not, then she was probably going into DT’s.

In Obama’s America, the wrong sort of joke is Treason.

And you know what the wrong sort is — and if you don’t, you’ll find out soon.

BUTbutbutbut ….. Hillary said the emails were 1) destroyed, and 2) only concerning personal matters. If it was no crime for her to disclose this stuff to begin with, how can a call for its disclosure by anybody be treason?

I watched that news conference. The bizarre part was the behavior of the reporters, along with the alleged rebuttals concocted by the Washington Post. I posted these links before, and I am re-posting because what was actually said matters, as does the alleged “debunking.”

The Washington Post published a transcript, and their “annotations.”
https://www.washingtonpost.com/news/the-fix/wp/2016/07/27/donald-trumps-falsehood-laden-press-conference-annotated/#comments

It’s Trump or no America simple as that.

Sh was dressed in all white. ..so if is nurse Rachet…cause we know she’s no angel.

The “brain surgeon” who failed the D.C. bar exam.

The “brain surgeon” who decided it would be a great idea to use America’s military to take out Libya’s government, without giving a thought to what might happen in Libya after its government was gone.

The “brain surgeon” who decided set up an insecure e-mail server in her home’s bathroom, and used it to transmit top secret government documents.

Yeah, that’s the kind of expert “experience” we need!

Scarborough, you don’t need to keep trying to convince us that you’re an idiot. Mission accomplished (long ago).

I notice the reflexive bias against working people, in favor of the intelligentsia.

Poor Joe needs brain surgery if he thinks Killary riding on her husbands coattails, & owned by Wall St is a good reason to vote for her, says it all.

Why not hire Cecile of the progressive Planned Parenthood corporation, an actual “brain surgeon”?

Joe makes me so much better about myself.

“It’s not a bad idea to get somebody who’s actually experienced and knows how Washington works.”

Typical Washington insider rationale. “She’s been around for 30 years! She knows how to play the game!”

The Presidency is not some sort of lifetime achievement (not that Hilary has actually accomplished anything) or attendance award.

Praise like Scarborough’s is only proof that Hilary knows what to do to further protect the Inside-the-Beltway cabal.

The question that was asked a lot early on and needs to be asked again: What exactly has she accomplished in her many years in the government? Answers were not forthcoming.