Scarborough Gushes Over Obama Speech—Before He Gives It

Scarborough Gushes Over Obama Speech—Before He Gives It 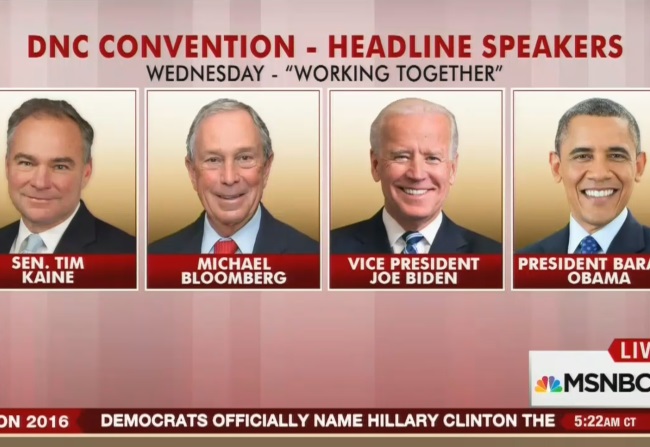 Couldn’t Joe Scarborough have waited until after Barack Obama and Joe Biden gave their DNC speeches tonight before he began gushing over them? Apparently not. On today’s Morning Joe, Scarborough, pre-lauding Obama’s speech-to-be, said “you know when you’re watching a great movie . . . and you can see where it’s going, and you sort of start smiling?”

But it wasn’t just Obama’s as yet unspoken speech that had Scarborough excited. “You look at that lineup: it’s absolutely extraordinary,” enthused Joe. In addition to Obama, tonight’s line-up consists of Michael Bloomberg, Tim Kaine and Joe Biden. Yes, when it comes to oratory that will bring people to their feet, set their pulses racing and forever claim that they were there in the hall that night, there’s nothing like Mike Bloomberg bragging about the day he banned the Big Gulp.

And then there was poor Mike Barnicle, discussing the aftermath of Bill Clinton’s disastrous speech at the 1988 DNC that was so bad, and so long, that his biggest applause line was when he said “and in conclusion.” Clinton went on the Johnny Carson show the next night to clean up the mess, playing the sax. Except Barnicle said it was “Bill Carson,” who played the “tuba.” Time to say goodnight, Mike.

MIKE BARNICLE: He was the first real political guest that Johnny Carson had on his show, and the reason that Carson finally relented and had Bill Carson, had Bill . . Clinton, Bill Clinton on the show was because they said he’d play the tuba. Remember? He came out and he played the —

BARNICLE: It’s a long time ago!

JOE SCARBOROUGH: You know when you’re watching a great movie, or you’re watching a great TV series or you’re watching a great musical, let’s say, and you can see where it’s going, and you sort of start smiling, seeing where it’s going? You can see all this feeding right in to Barack Obama. Coming up on stage, and delivering a message to that hall and the rest of America, where he does four years later what Bill Clinton did for him four years ago. Remember all the Obama supporters said “why can’t anybody make the case? Why is there no–” Bill Clinton went out and made that case for the Obamas better than the Obamas could make for themselves. Barack Obama, I predict, returns the favor tonight and makes that case that you all are talking about in a way better than the Clintons can make for themselves.

And again, you look at that lineup. It’s absolutely extraordinary. I think we’re going to look back, I really do. I think Joe Biden and Barack Obama, I think this is going to be a night to remember if you love politics, if you love this sort of thing.

Be very, very suspicious and concerned about how the MSM covers HRC because of collusion and stupidity.

Bernie probably knew that it was impossible to fake unanimous consent on live national TV so, to his credit, he did not actively take part in the sham. But as far as I can tell no one in the MSM noticed the farce, not even Fox. So the farce continues with the willing or ignorant participation of the MSM.

“Buy a shotgun” Biden and “If you like your plan you can keep you plan” Obama are the perfect spokesmen for the likes of “I did not have sexual relations with that woman” and “Nothing I sent or received was classified” Clinton. Tonight will truly be a 3-ring circus act under the Big Top!

O/T: Baltimore prosecutor has dropped all charges against all remaining cops in Freddie Gray case, to include the first case that resulted in a hung jury.

Now if course, the mayor will settle the police law suits with lots of cash.

Should read “Now of course”

Joe made a “pillow talk” promise to Mika

We have to forgive Barnicle for that error. He most likely plagiarized the comment from somebody else who had it wrong.

We now know with solid proof that the media are in the tank for Hillary. And still they go on, as if we haven’t seen the emails!

It’s like a pop “singer” falling down and it becomes apparent that she’s lip-syncing to a recording… and she gets up with a smile and continues the phony show anyway.