They do not have a motive yet, but children are among the dead and wounded. 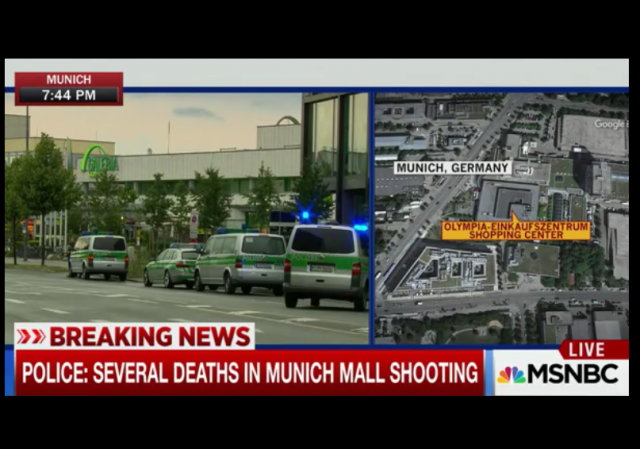 The Munich police have an 18-year-old German-Iranian male shot and killed eight people today. He killed himself afterwards and they do not have a motive.

Munich Police: The suspect was not previously known to the police. https://t.co/J1HPUcX467

They also confirmed he was the only gunman and used a pistol, not a rifle. They will not release any information about the eight victims until they have notified the families. Children are among the dead and wounded.

Munich police: No information regarding victims' identities will be provided untill all families are notified. #OEZ https://t.co/J1HPUcX467

#Munich police: Children and young people are amongst the dead and wounded. No further details until relatives notified. #OEZ

#Munich Police: 1. As part of the investigation, we have found a person that has commited suicide. In all likelihood https://t.co/HQFQIh2sKl

#Munich Police: 2. it is one of the perpetrators and all indications point to the fact that he acted alone #oez https://t.co/aSwR6BgoMP

Obama had to insert himself when he released his statement about the Munich shooting. He brought up Malia graduating college and leaving the nest:

‘Our way of life, our freedoms,’ he said, ‘our ability to go about our business every day, raising our kids’ – and suddenly the president’s mood shifted.

‘And seeing them grow up and graduate from high school, and now about to leave their dad,’ he continued, waving his hand and breaking the tension as the room erupted in laughter.

However, one witness told CNN the shooter yelled “allahu Akbar.”

Video of the conference with the Munich police spokesman:

Here is an image of the shooter:

One of the gunmen shot himself in the head:

One of the gunmen shoots himself in head outside #Munich shopping center: German Focus mag https://t.co/aFRb9iVpIV

#BREAKING: At least six people are believed to have been killed in a shooting rampage in a shopping center in #Munich, police source said.

A major police operation is underway in Munich’s Moosach district.  Police has asked people to vacate all public places and stay at homes until further notice. German authorities have refused to call it a terrorist attack at this point.

Today’s shootings come just 5 days after a 17 year old Afghan migrant went on a stabbing spree inside a commuter train near the southern Germany city of Würzburg. Munich is two and a half hour from Würzburg.

*Mary Chastain providing some of the updates.

I see the Baptists are at it again.

Dancing in the streets!

Are you TRYING to get the man most likely to come after you elected, my weirdbeardian friends? Because it sure seems like it.

Soon the libtards will be claiming that Trump is paying these terrorist to create unrest so he’ll get elected. 🙂

I get your point, but you still seem kinda happy that innocent people are dead.

Maybe he is thinking about not letting a good crisis go to waste.

This is what happens with Leftist rule. Gun control and free zones do not work. That Left will always fail. But in the end, what has happen their is most unfortunate.

Obama just made an announcement that he had conferred with Merkel and they are convinced this is not islamic terrorism. Obama went on to say they have determined it was just every day mall violence that started when an evil jewish merchant wouldn’t give a muslim refugee a demanded discount at checkout.

Come on Hillary, come out and tell us that this was because of the settlements.

The blood of all these dead Europeans over the last two years is on Merkel. Her and the “people” who commit these atrocities.

I worry that the European countries will respond to this by trying to pacify the Islamists by adding more Islamic education to schools, opening up more immigration from Islamic countries, and having more discrimination against the people Islamists hate, specifically Jews. It is what European countries have usually done in the past in response to terrorism. And, it has never worked out well.

You left out the part where they come running to us for help.

If the Europeans can’t see the light, they can suck it.

And, due to the situation in Europe at that time, he had to exile himself to seek answers to that question, Rags.

What? Wait! I thought that kind of thing ONLY happened in the U.S. !!!!

I also remember being told by Our Glorious President that the U.S. is the “only developed nation” that has mass shootings. And then Charlie Hebdo happened, and the Bataclan massacre, and now this.

I guess France and Germany just lost their status as “developed nations”.

I am likely going to get down-ticks for this, but here goes: Hello, Germany. This is one of your descendants writing. This descendant notices that in this REAL time of REAL crisis, with your nation’s social fabric being rent to tatters at en ever increasing rate, you stand there like frightened children doing nothing but metaphorically soiling yourselves and wringing your hands.

Where is your Teutonic spirit? Where are your pointed helmets NOW, your up-thrust right hands NOW? Why no Night of the Broken Glass in the “enemy” districts of Berlin, Munich, and Frankfurt NOW?

Is it that you are, in fact, up against a foe that will fight back hard, kill your innocents and rape your daughters rather than cower as they climb into the trucks like last time?

I notice a pattern in these shootings… during and immediately after the incidents we hear about multiple shooters. Then, a few hours into the investigations we are told that it was a “lone gunman.”

Given the fact that the Prog Elites have opened the borders and buried their collective heads in the sand, allowing these situations to happen, I have to admit to feeling some “conspiracy theory” sorts of thoughts here.

I don’t trust them when they say it was in fact a “lone gunman.” I’m thinking that in at least some of these incidences the accomplices got away and the Prog Elite would rather not admit to letting them get away.

Letting them in is bad enough, but letting them get away after committing mass murder might be a bridge too far.

Yep, that’s what happened in Dallas, too. Don’t be too quick th remove your tin foil hat…

True. But we’re also frequently told that an AR-15 — a military assault weapon — was used in the attack. Bullet-proof vests also feature prominently in early reporting. As do angry Republican Tea-Party-types.

So I tend to dismiss the details of early reports.

“Letting them in is bad enough, but letting them get away after committing mass murder might be a bridge too far.”

Where is Noor Mateen?

A “lone gunman” in this context is one not attached to a Siamese twin.

let me help with that process:

They do not have a motive yet…….18-year-old German-Iranian male

now, connect the dots and you’ll have your answer.

They do not have a motive yet …

Is Legal Insurrection jumping in that bandwagon too?

All of these attacks so close together. What’s the word for it? Oh yeah, its “war”.