Instead, she told the GOP to look at FBI Director James Comey’s statements. 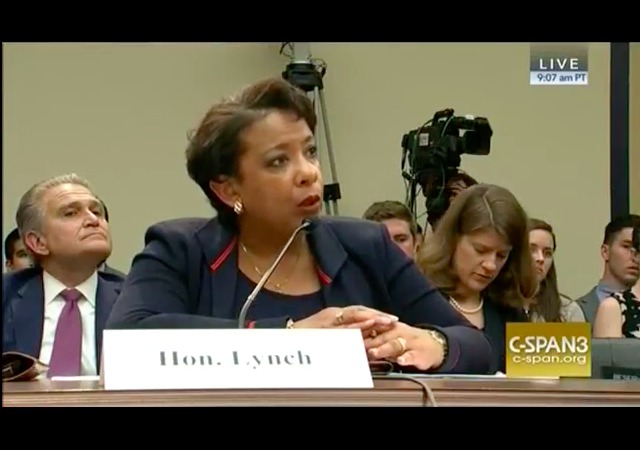 Attorney General Loretta Lynch would not answer questions about the Hillary Clinton email scandal at a hearing with the House Judiciary Committee. She said:

“While I understand that this investigation has generated significant public interest, as attorney general, it would be inappropriate for me to comment further on the underlying facts of the investigation or the legal basis for the team’s recommendation,” Lynch told the House Judiciary Committee.

.@RepGoodlatte to Attorney General @LorettaLynch: refusal to answer questions is an abdication of responsibility. pic.twitter.com/AOzC4TZNfx

She kept telling Rep. Bob Goodlatte (R-VA), chairman of the committee, to look at “[FBI Director James] Comey’s statements” instead of answering the simple questions.

Rep. Randy Forbes (R-VA) asked Lynch if a law prohibited her from talking about the case, unlike Comey. Eventually, Lynch said the two of them had “very different roles” in the investigation:

“There is no legal prohibition that can be cited here,” Forbes countered.

The FBI recommended no prosecution against Clinton even though they found she and staff mishandled classified information on her private email server. But Comey admitted to the House Oversight Committee “that any of his employees who handled emails the way Clinton did could be subject to dismissal or loss of security clearance.”

“Late this afternoon, I met with FBI Director James Comey and career prosecutors and agents who conducted the investigation of Secretary Hillary Clinton’s use of a personal email system during her time as Secretary of State. I received and accepted their unanimous recommendation that the thorough, year-long investigation be closed and that no charges be brought against any individuals within the scope of the investigation.”

Goodlatte also said not to at least “pursue charges ‘defies logic and the law,'” especially since she met with former President Bill Clinton in Arizona right before Comey announced his decision:

Goodlatte suggested that and other factors could have been grounds for recusal, but Lynch rebuffed the notion. And she insisted that the discussion with the former president was “social” and did not pertain to the email investigation.

Lynch has nevertheless expressed regret for the meeting and acknowledged that it had “cast a shadow” on the public perception of the Justice Department’s independence.

Republicans kept trying to get answers from Lynch, but she stood her ground.

Then this exchange happened between the two of them:

Chaffetz to Lynch: Any examples of where it’s legally acceptable to retain classified info in a non-secure location? pic.twitter.com/vITNZQ9w3n

AG Lynch responds to Rep. Chaffetz: "I don’t have a hypothetical answer for that."

The Republicans also lashed out at Lynch since she did not review the case before announcing Clinton will not face charges:

Judiciary Committee Chairman Bob Goodlatte called it an “abdication of your responsibility.”

“The buck stops with you,’’ Rep. Jim Sensenbrenner (R-Ill.) said.

Did anyone ask Lynch if she had personally represented the Clintons on tax (or other) matters while she was a partner at Hogan and Hartson?

At this point “what does it matter” Just one more little white lie!

A vile administration who has destroyed the rule of law.

The outraged Congressmen will not cut the DoJ budget, nor seek impeachment of AG Lynch for non-feasance. As with the Trumpkins, just being outraged is not enough.

Which is precisely why Trump is representing the GOP in the next election. The GOP “leaders” are always outraged for a few moments before they capitulate. Not even a hint of a fight. Their biggest fear is not us – it’s that the press may think badly of them.

Trump probably will betray some of his supporters. The question in my mind remains whether or not he will betray those who voted for him (as opposed to voting against Hillary Clinton) to the same extent as GOP leaders such as Mitch McConnell betrayed the voters.

I really hope such a betrayal does not come to pass (assuming a Trump victory, of course) since the anger that made Trump a primary winner is not going away anytime soon. A massive betrayal by Trump would make at least 3 elections that the voters used to reject the policies in Washington–2010, 2012, and 2016. What happens if millions of Americans decide that voting doesn’t matter anymore? Nothing good, it seems to me.

The words “honorable” and “Lynch” do not belong together.

Questions she should have been asked but never will be.

How much was the payoff given her to ensure no prosecution?
What was the payoff given to Comey?
Will she also kill the Hillary perjury investigation or will she be demanding a bigger bribe for that?
Has the pay-to-play investigation of the Clinton Foundation been buried or can we expect more unethical shenanigans around that?
What exactly is the price of an Attorney General’s integrity? How about an FBI Director’s?

This woman says lots and lots of words and they mean absolutely nothing.

She is a Clinton class obfuscator.

Progressives have learned from the best.

“Madam Attorney General, are there any questions you ARE willing to answer?”

Comey is the one who’s protecting Hillary. They grilled Comey, and couldn’t get anything out of him. So now they’re trying to grill somebody else, hoping for better luck.

But that somebody isn’t the one protecting Hillary and destroying the rule of law in America. That remains Comey, and nobody else.

Whatever deal the Clintons may have cut with Comey isn’t something Lynch is likely to know about. The Clintons are thoroughly crooked, but they’re not so stupid as to leave that sort of trail. The only person who will leak that info is Comey himself. Badgering Lynch for it just won’t work.

Like it or not, Lynch is free and clear. She left the investigation to the Federal Bureau of Investigation—and quite properly so—and that bureau came to a conclusion. That was the investigation, and she has no reasonable grounds to blow it off, even if she wants to.

Now, Lynch may have been the backup plan. If Comey had failed to come through for the cause of Government-as-Crime-Syndicate, then maybe Lynch would have had the opportunity to earn her Clintonian reward. But that situation didn’t arise, and how Lynch would have performed must remain speculation. Congress can hardly grill her over what she might have done in different circumstances.

The only good which might come of this fiasco—and it ain’t much—is that now maybe all those doofs who have been telling us for months what a stand-up guy Comey is will have the decency to just STFU in future.

Collusion almost certainly occurred, however. Lynch would have taken an unnecessary risk by promising to abide by the recommendation if she didn’t know the fix was in. The way it played out, Lynch is seen to just be standing by her word, while Comey takes the heat (such as yours). Not saying he’s completely innocent, but intentionally or not he may have preserved a criminal case against Clinton for a Republican administration, rather than permitting the current administration to intentionally bungle a prosecution, allowing her get away with her crimes for an inability to try her again for the same offenses.

Comey has served his purpose to the Clintons by taking the heat off Lynch and Obama regarding H->illary’s e-mail scandal. He knows too much. Dead Man Walkin’…

So the FBI director publicly rewrites statute law and it’s not appropriate for the Attorney General to comment before Congress.

Zimbabwe is laughing at us.

A Russian co-worker told me: Now Americans know what it is like to live under communism.

“While I understand that this investigation has generated significant public interest, as attorney general, it would be inappropriate for me to comment further on the underlying facts of the investigation or the legal basis for the team’s recommendation,” Lynch told the House Judiciary Committee.

If it were still an active investigation, it would indeed be inappropriate for her to comment.

But it’s not: the FBI has officially closed the investigation and issued their recommendation, so there’s absolutely zero problem with commenting on it. The facts are in, the legalities have been weighed (poorly in my opinion, but…), the decision has been made. Providing those facts and legalities to a concerned public at this stage is not in any way inappropriate; I’d even go so far as to say it’s necessary for transparency.

But this is par for the course for the “most transparent administration in history”.

The republicans are laughing at us more than the D’s.

They had their little show, now back to the business of enriching their fat selves and stripping Americans to their underwear.

I’m sorry that I considered the FBI to be an ethical branch of law enforcement. #fixisin describes most of what I’m feeling about their decision now.
https://twitter.com/hashtag/fixisin