Authorities have asked the FBI to assist in the investigation. 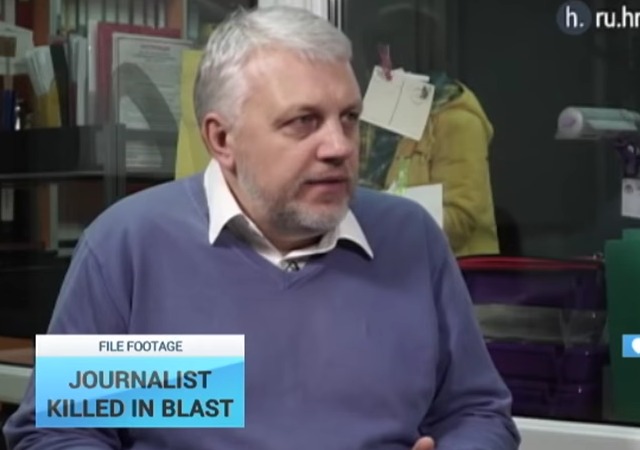 Prominent journalist Pavel Sheremet died in a car bombing in Kiev, Ukraine, today. The Belarusian journalist went to Ukraine from Russia after the Kremlin clamped down on the media and his cameraman was murdered.

The authorities do not have any suspects. However, the car belonged to Sheremet’s partner Olena Prytula, the founding editor of their publication Ukrainska Pravda, a well respected outlet. Sheremet’s colleagues believe the perpetrators targeted Prytula.

President Petro Poroshenko demanded “an immediate investigation” and asked the U.S.’s FBI to assist the government:

“We’re looking into all scenarios, primarily the one linked to his professional activity,” [police chief Khatia] Dekanoidze said. “We need to understand the motive.”

Investigators are also looking into whether Prytula was the intended target, a spokeswoman for the Kiev Prosecutor’s Office told TV channel 112. The police are providing her with bodyguards.

“We’ve lost a prominent and dedicated journalist,” Dunja Mijatović, media-freedom representative for the Organization for Security and Cooperation in Europe, said by e-mail. “The safety situation for journalists in Ukraine must be addressed.”

Sheremet left the house to host his morning show on Radio Vesti. Witnesses described the scene to The Kyiv Post:

Lyubov Pereyenko, a witness of the explosion, was selling fruits in her kiosk nearby. According to her words, the ambulance came very quickly, some 7-8 minutes, and police came after that. “Law enforcement came just after ambulance, and took (everyone) to the safe distance,” Pereyenko said. “The explosion was so strong that the parts (of the car) were lying near my kiosk.”

Aleksandr Rotan, a waiter at Device Club, located meters from where the explosion took place, helped drag Sheremet out of his car immediately after the explosion.

“It sounded like a shell,” Rotan said, adding that Sheremet was still alive, though unconscious immediately after the blast.

Anatoliy Vitter, a taxi driver who was smoking a cigarette on the opposite corner as the car exploded, said that Sheremet had stopped to let another car pass the intersection as the blast went off.

“You couldn’t see him there was so much smoke,” Viter told the Kyiv Post. “It was as if it was clearly ordered.”

Vitter said that the explosion launched bits of the car into the air, and forced the bumper to fly across the street.
“He could barely breathe and was gasping for breath,” Viter said. When asked if he was alive after being pulled from the car, Viter replied: “If you can call that alive.”

Zoryan Shiryak, advisor to the Ukrainian Interior Minister, said the preliminary investigation showed that “an improvised caseless explosive device equivalent to 400 to 600 grams of TNT” caused the explosion.

Ukraine has been in turmoil since November 2013 when citizens spawned Euromaiden in Independence Square where they demanded then-President Viktor Yanukovych, who received backing from Russia, resign after he canceled an association agreement with the European Union for closer ties to Russia.

Parliament ousted him at the end of February 2014 and everything unraveled from there. Pro-Russian rebels erupted in the east, Russia invaded, and the Kremlin annexed Crimea. East Ukraine is still at war.

Sheremet became famous in Russia when he covered the war in Chechnya in 1999-2000. He fled after someone murdered his cameraman, which led him to believe his life was in danger from Balraus’s authorities.

In 2000, people murdered and decapitated Georgiy Gongadze, the founder of Ukrainska Pravda. Authorities pointed their fingers at then-President Leonid Kuchma. A commission from 2005 said he did organize the kidnapping, but he denied any involvement.

Annoying as journalists can be, this is unacceptable. Murder of a journalist, like of a policeman, is a crime against society as well as the person.

I’m sure it eas just carelessness, and no one would prosecute it.

Maybe the FBI can solve a crime in Ukraine?