Many more are wounded or missing 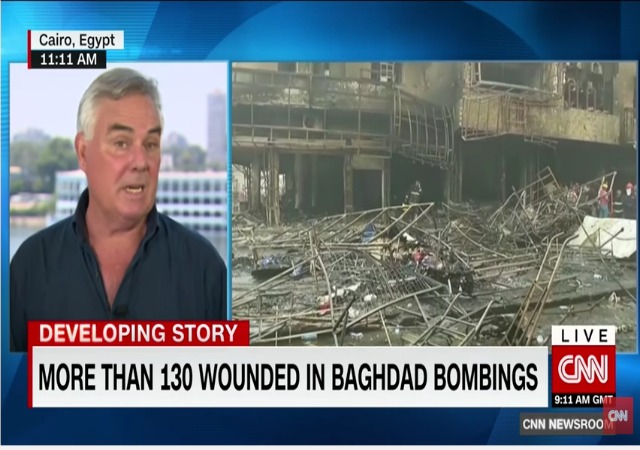 The Islamic State (ISIS) has claimed responsibility for a massive bomb that killed over 120 in Baghdad, their third attack in three countries in a week.

The bomb exploded after midnight in Karrada, a neighborhood filled with shops and restaurants filled with people making plans before the end of Ramadan. The dead included 25 children and 10 women.

Officials have said many people are still missing.

“It was like an earthquake,” said Karim Sami, a 35-year-old street vendor. “I wrapped up my goods and was heading home when I saw a fireball with a thunderous bombing,” the father of three said.

“I was so scared to go back and started to make phone calls to my friends, but none answered.” He said that one of his friends was killed, another was wounded and one was still missing.

The police said the majority burned to death or suffocated “inside a multi-story shopping and amusement mall.”

ISIS, a Sunni group, claimed they targeted a Shiite gathering, but both Sunnis and Shiites gathered in the neighborhood on Sunday.

Another blast in Baghdad’s al-Shaab killed four people and injured sixteen. No one has taken responsibility for the attack, but officials believe ISIS pulled it off.

The group also attached the Holey Artisan Bakery in Dhaka, Bangladesh, where the attackers targeted foreigners:

“Bengali people, come out,” one gunman shouted. When the cook, Sumir Barai, and eight other men opened the bathroom door, trembling, they saw two young men, clean shaven and dressed in jeans and T-shirts.

“You don’t need to be so tense,” one of the men told them. “We will not kill Bengalis. We will only kill foreigners.” At that, Mr. Barai’s gaze flicked to the floor of the restaurant, where he could see six or seven bodies, apparently shot and then sliced with machetes. All appeared to be foreigners.

The Turkish government blamed ISIS for the attack on the Atatürk Airport that killed 45 people and injured almost 200 people.

ISIS attacked only a week after Iraqi forces liberated Fallujah, which the terrorist group held for over two years. ISIS has also faced defeats in other places in Syria and Iraq, which have forced the terrorist group “to revert to more guerrilla-style tactics such as suicide attacks on civilians in urban areas.”

Remember when Obama was boasting about a stable and self-reliant Iraq (and crediting himself, of course), and Biden was claiming Iraq was one of Obama’s “greatest achievements”?

Those photos of Obama’s “greatest achievement” say it all.

Obama must be proud.

Not official until we’re told that “this had nothing to do with Islam.”

Weird, all these bombs going off, with nothing in common, and no pattern to them. Could it be defective bombs, that just blow up for no reason? Maybe more bomb control laws would help.

The amusing thing is that neither Turkey nor Iran have a moral objection to what ISIS is doing. They just think infidels should die first before Muslims declare takfir on each other.

Wow, it is all Obama’s fault. He was supposed to fix what Bush & Cheney broke without the will of the American people or the money.

By fighting the wrong war, disbanding the Iraqi Army, handing power to a different faction and claiming ‘Mission Accomplished’, the seeds were sewn for what has followed. We also handed Iraq over to Iran. What exactly were we supposed to do? As a result of IEDs and EFPs, we have hundreds of thousands of soldiers missing limbs and suffering for TBI. Do you guys want to send in more? We can take territory any time we wish. But we can’t hold it and they don’t want us there. As Bush pointed out, we are Crusaders.

George W. Bush permanently changed the region. Unfortunately there were no flowers and sweets. The was most certainly did not pay for itself with oil. The democracy we got was illiberal. The new Iraqi military is corrupt, cowardly and sectarian. Our Congress is hostile to the point of obstructionist to anything Obama tries to do. Undoubtedly, Obama could have done better and he used his PR power to paint a horrible situation as OK. He is a politician. What do you expect? But put the blame were it belongs. We, under Bush, broke it. Who wants to fix it – not us.

It stinks. But what is the solution? Trump is going to fix it by bombing them? HaHaHa.

Onlyright. Obama said he was going to piss it away and he did. I don’t see what your complaint could be.