“Stand Up And Say So” 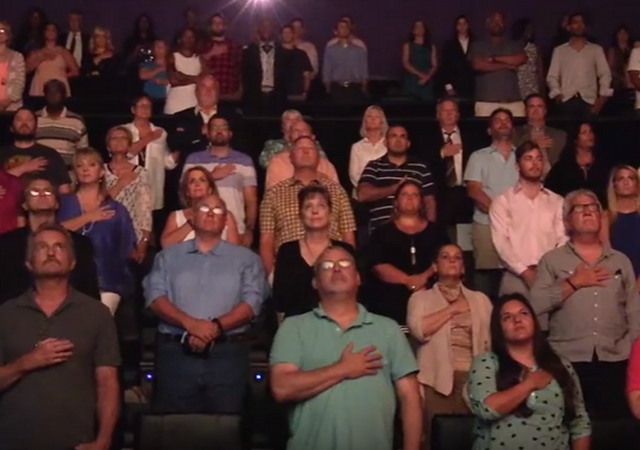 Dinesh D’Souza’s new film “Hillary’s America” opened on Friday and will get plenty of buzz as the Democratic National Convention unfolds in Philadelphia this week.

To help promote the movie, Dinesh and his team have released a music video featuring Larry Gatlin and the Gatlin Brothers.

Dinesh D’Souza on Saturday released a music video for his latest documentary, Hillary’s America, featuring Larry Gatlin and the Gatlin Brothers singing “Stand Up and Say So,” the song they wrote and performed for the film, which opened Friday.

The video features footage from the recent premiere of Hillary’s America at the Republican National Convention, along with real and imagined video of Clinton, the presumptive Democratic nominee for president.

“You know who you are, you lyin’ so-and-so,” Gatlin sings, while Hillary Clinton dances with her husband. “I know you’re lyin’ cuz your lips are movin’.”

Hillary’s America is D’Souza’s third film, after 2016: Obama’s America and America: Imagine a World Without Her, but it’s the first of his films to feature an original song.

The release of the video coincided with an endorsement of the film from Republican presidential nominee Donald Trump. “Dinesh D’Souza Hillary’s America. see it,” Trump tweeted.

D’Souza is also taking his movie to the Democratic National Convention, which kicks off Monday in Philadelphia. A screening near the proceedings on Sunday, which features remarks by D’Souza, is sold out and the filmmakers are working to add more, they told The Hollywood Reporter on Saturday.

It’s a pretty catchy song and the lyrics are a riot. Give it a listen below:

I saw D’Souza’s last film “Obama’s America 2016” and found it fascinating and extremely well produced so I’m looking forward to seeing this one too.

D’Souza’s website has more information on the film and where to see it.