Hillary: I found out about tarmac summit “in the news” and “hindsight’s 20-20”

Hillary: I found out about tarmac summit “in the news” and “hindsight’s 20-20”

And, of course, “I never received nor sent any material that was marked classified.” 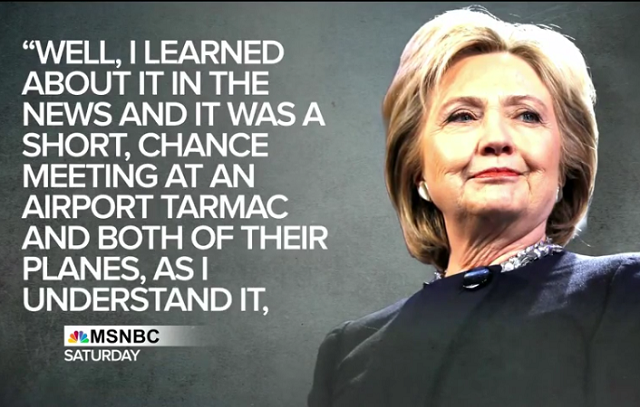 The day after Hillary Clinton’s “voluntary interview” with the FBI, she appeared this morning on Meet the Press.

From the NBC transcript of the interview:

. . . .  Yesterday, the F.B.I. interviewed Hillary Clinton for about three and a half hours at its headquarters right here in Washington D.C. about the use of her private email server while she was secretary of State. I spoke with the former secretary late yesterday on MSNBC, her only interview since meeting with the F.B.I., and asked her whether the description of the interview as “civil and businesslike” was accurate.

Well, it was both. It was something I had offered to do since last August. I’ve been eager to do it and I was pleased to have the opportunity to assist the department in bringing its review to a conclusion.

How did your private server, where you kept this classified information, some of which was retroactive, I understand, after your term as Secretary of State, how is that not a violation of this code?

I never received nor sent any material that was marked classified. And there is a process for the review of material before it is released to the public. And there were decisions made that material should be classified, I do call that retroactively classifying. So therefore it would not be publicly released. But that doesn’t change the fact as I have explained many times.

That last “as I have explained many times” is the heart (and purpose) of this interview.  Todd asked her to “explain” various discrepancies in her statements, and she did so . . . repeating the same tired talking points.

The goal, apparently, is to claim there’s no there there . .  on the emails, the server, or the “chance” meeting between her husband and AG Loretta Lynch.

Hillary tells Todd that she didn’t know about the meeting between her husband and Loretta Lynch until she “heard it on the news” (sound familiar?).

At the same time, there was another story Clinton would love to try to leave behind, that tarmac meeting at the Phoenix airport between Bill Clinton and Attorney General Loretta Lynch. Given Hillary Clinton’s email troubles, the impromptu exchange was seen by her opponents as evidence of a conspiracy. Even by supporters though, as just bad optics. On MSNBC yesterday, I asked for her reaction to the meeting.

[The audio is here]

Well, I learned about it in the news. And it was a short, chance meeting at an airport tarmac. Both of their planes, as I understand it, were landing on the same tarmac at about the same time, and the attorney general’s husband was there, they said hello, they talked about grandkids, which is very much on our minds these days, golf, their mutual friend, former Attorney General Janet Reno, it was purely social. They did not veer off of speaking about those kinds of very common exchanges.

Do you understand why many in the public, many, some of them are political opponents of yours, some are supporters that thought that was a bad decision by your husband, that that was a mistake and he should have known better?

Well, I think hindsight’s 20-20. Both the attorney general and my husband have said that they wouldn’t do it again even though it was, from all accounts that I have heard and seen, an exchange of pleasantries. But obviously, no one wants to see any untoward conclusions drawn, and they said they would not do it again.

Hindsight is 20/20?  A former president, a presidential candidate, and the attorney general of the United States didn’t see the impropriety of this “chance meeting” before the fact?  Really?

The impact of that “tarmac summit” is clear even to an MSNBC discussion panel.

Don’t you all understand? It’s only an issue if the mainstream media makes it an issue. If the political parties of the participants were reversed, the media would be all over this thing like mouches à merde.

But the media will give them all a pass, prompting me to say (once again), “There’s nothing to see here. Move along.”

One of the great weapons of the enemy is to make you think that you are alone. You are not alone. A lot of people think that this is scandalous despite the media not calling it so. The other side wants you to be disheartened, depressed, and withdrawn from activity. Do you want to give them that victory?

I look forward to an attorney preparing an indictment of Hillary Clinton based on the facts that are known (out in the public) about the use of her private server and the millions of dollars in donations from foreign governments in return for favors from Ms. Clinton as Secretary of State. It would make a good mailer in the Presidential campaign.

The citizens indictment should follow the outline of the indictment of Thomas Drake, NSA whistle blower:

Drakes story should scare the hell out of every citizen

or follow the outline of the Bill of Information filed against David Petraeus:

Do you mean the blue falcon, David Betrayus?

Lets all demand a citizens indictment of Hillary Clinton!

In other words, it raw information that hasn’t had time to go through the classification process? So possibly literally true, although deceitful and misleading

Why the hell would a former state AG and a sitting AG of the United States need “hindsight” to avoid a meeting that any first-year lawyer would know was improper and unethical?

So sick of these frauds. Why doesn’t Hillary just tell the truth for once in her miserable life: “Sure that meeting was an obvious violation of basic legal ethics rules, but rules simply don’t apply to people like us.”

A great mystery of the day is; why would anyone, anywhere, of any stripe, consider voting for this wretched nobody?

Here we see one of the reasons. With Hillary, you know what you’re getting. There’s no danger that she’ll change, no fear that she’ll ever do anything surprising, there will be nothing to challenge a voter’s perceptions. She tells the same lies she told yesterday, word-for-word, no matter what may have happened since the last time which makes the lies increasingly irrelevant and absurd, and she’ll be telling the same lies tomorrow. You get a lying, scheming, conniving dirtbag, but a comfortingly familiar dirtbag.

Contrast this with Trump. Even if you have Trump sorta/kinda figured out, you still never know exactly which way he’ll jump. All you know is that he will indeed jump. This by itself is unsettling.

Some people must know exactly what they’re getting, even if they realize that it’s a turd. What is Monty Hall hiding behind the door? Is it a new car, or is it a goat? The uncertainty is torture. They’ll take the goat, because it’s a sure thing. Others are willing to risk the chance, because they may get the car, and uncertainty really doesn’t terrify them.

Just a matter of attitude. The number of people with such a pathological fear of uncertainty may not be terribly large, but of such things are margins of victory made.

But this presents the D’rats with a problem. They can’t change horses now. They must ride this tired nag into the ground, even if its lungs foam up and it collapses under them. Any change would be fatal to the D’rat campaign; the people who must have something familiar will go with the next-most-familiar thing, and that won’t be the new horse, it will be Donald.

Progressivism is lies and obfuscation and evil of the highest order: a scapegoated YouTube video meant to distract and to distort so that State Dept. heads wouldn’t roll; a CA Democratic rep on Fox News Sunday feeding us the Ruling Class pablum about Hillary; a Fast and Furious scheme meant to invoke animus against guns and gun owners; a scheming narcissistic President who worries only about optics and not about the people under his watch; an AG and FBI agents who make every appearance of colluding with a subject of an criminal investigation; a media that slops the trough for those who “believe” in Progressives and climate change…

This is as credible as the video that caused Benghazi story. Does this woman ever take a day off from lying? I mean she lies when the truth would be better for her credibility.

OK,clinton receives an email that has no marking, but it has no marking because the idiot who sent it did not bother to stop drinking and mark it TOP SECRET because of the content about anti missile missiles in Korea.
Is clinton saying she is too stupid to figure out that the sender made a mistake and should be fired and the email should be secured somehow.
She can’t recognize “classified” when she sees it?

The only people scummier than Hillary Clinton are the “news” people who hide the truth of her corruption and incompetence.

” Oh yeah Honey, guess who I bumped into today.
Loretta Lynch, you know, the United States Attorneys General… You know, the one who is Investigating us!
Well, I just wheeled on over, and we had a GREAT chat on her private Gulf-Stream..”

Not for no reason did she pick Upchuck Todd to carry water for her today, with just enough in the way of slightly awkward questions for her sycophants to turn around and say, “See, she sat for a hard interview! She was grilled by Chuck TODD, for chrissake!”

Whatever he is – host, prompter reader – journalist he isn’t.

Just once, I’d like to see someone, anyone, go after Hillary the way Christianne Amanpour went after Daniel Hannen on CNN the other day; she was damn near screaming at him, telling him, repeatedly, in so many words, he was full of shit (He wasn’t, and held his own very effectively, behaving far more professionally than her).

It’s pretty obvious she didn’t send or receive *marked* emails because the markings either were stripped, or never applied, before being sent.

So their planes just happened to arrive not just on the same day, but at exactly the same time and were parked in the same place? Yeah, that’s plausible. What do the control tower records give as time of arrival for both planes? It would be interesting to see if the real coverup is that one of them *waited a substantial period of time*.

If it was Billy Jeff getting there first, he’d say he’s waiting on a haircut.

Except that at least one email was found with internal classfied markings intact. They stripped the ones from the header, but didn’t notice the internal ones.

There are no words. None. I am speechless. The overt shamelessness and open F-U to the American people that this stunt involved is record-breaking

I have a question that nobody has ever asked. Sure, Clinton says she never sent or received material marked “classified.” OK, I get that. SO –

How did the State Department communicate “Sensitive” or “Classified” material to her? Diplomatic pouch? Hand delivery? Carrier pigeon?

If you take Madam Secretary’s word at face value, nobody ever sent her classified information by electronic means. Ever. This strains credulity.

“I have a question that nobody has ever asked.”

I have. For a SOS to serve requires they deal in classified information. Either you are not working or you do.

All lies all the time by everyone in this government. They all belong to the same ruling party.

When you can say/do nearly anything without fear of being properly questioned, why not? This drips with a foul thick sense of entitlement.