Hillary: As President, Trump Could Use IRS to Target His Enemies

Hillary: As President, Trump Could Use IRS to Target His Enemies

Gosh. That would be awful, wouldn’t it? 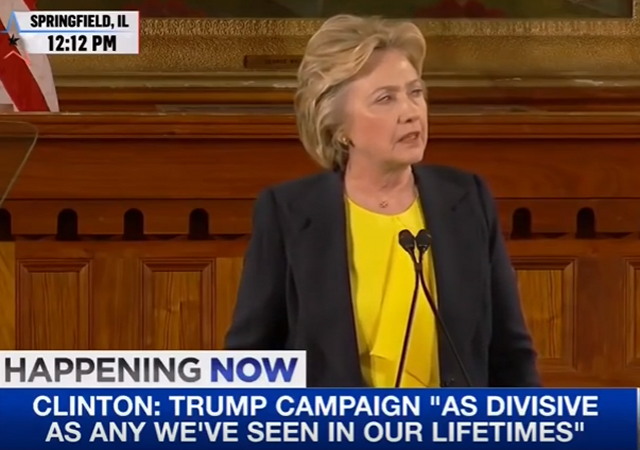 Have you noticed that many of Trump’s critics accuse him of things he hasn’t done yet but which other people have actually done already? The latest example comes from the presumptive Democratic nominee who warns President Trump could use the IRS to target his enemies.

Hillary: Can you imagine electing a vindictive man who might … send the IRS after his critics?

You know what? I can imagine it. Pretty vividly, actually. Right down to the names of the “hypothetical” IRS officers involved.

Of all the examples she could have cited to make the point that Trump is a loose cannon, how did she and her speechwriters conclude that this was one worth floating? I understand calling him out for wanting to issue illegal orders to the military; that’s the most alarming thing he’s said since he got in the race. But attacking Trump over a potential IRS gone rogue is like attacking him for potentially wanting to intervene in foreign civil wars without Congress’s approval. We’ve seen that movie already. In fact, Hillary Clinton produced that movie.

Even lamer, if the IRS decides to start taking down political enemies, it’s more likely they’d focus on taking down President Trump himself than his adversaries. Judging by their political donations, IRS employees lean in exactly the partisan direction you’d expect the taxman to lean. Obama didn’t need to tell Lois Lerner to target tea partiers. That sort of thing would occur to her naturally given the agency’s institutional lean.

Watch Hillary Clinton paint a picture of this potential travesty which already unfolded under President Obama.

Hillary has one thing going for her here. The media has pretty much abandoned all reportage of the IRS targeting scandal. How many average Americans even know Obama used the IRS to silence tax paying Americans in the run up to the 2012 election and got away with it?

Hillary can get away with this bc most of America never heard about the IRS scandal on Facebook or the Daily Show https://t.co/jdYFp7wBdI

If we had an honest media, Hillary would have been laughed off the stage for saying this.

So … she’s claiming that once in office Trump will act like a Democrat?

That doesn’t seem like a winning strategy for Hill.

There’s a lot of things Trump COULD do, that Obama’s IRS has already done.

She’s just trolling at this point.

This is probably a brilliant preemptive strike by Hillary exactly because most people are unaware of the IRS targeting of conservatives. Both sides save their big ammunition for the general. If the subject of IRS targeting comes up she can most likely count on the less informed to only remember her charge of Trump being the likely culprit.

That hasn’t worked out for her so far with her ads.

They’ve been citing Trumps strengths while acting like they are a bad thing.

That’s why there was a poll a couple days ago with 50% of responders saying that they have been seeing Trump ads when in fact he hasn’t run any. (aside from a couple of PAC small buys)

“brilliant” and “Hillary” do not belong in the same sentence.

As for your observation, you’re wrong. Trump will not let the press get away with their normal shenanigans. You would think some of you nevertrumpers might have figured this out by now.

As the general said, “don’t be stuck on stupid”.

Hillary knows all about targeting enemies. Without that targeting, she would be no where near being president.

Hillary “Not A Crook” Clinton

Don’t forget that she and Slick did the same thing when rhey were in the White House during the 90’s.

The more she’s out and speaking the more her numbers drop. Keep talking hitlery

Throw another baby… I mean, nation on the barbie, Clinton. And whatever Planned Parenthood does in the privacy of their chambers.

Blame her enemies for what she intends….

Heck – blame your enemies for what your party has already done!
We’re wise to this ploy. :o)

It is, at least in my mind, an illegal act. In her mind it is permissible for democrats only. Of course i am not a lawyer but obama, hillary, and lois lerner are so they carry the argument with their credentials.

Would he have people’s FBI files in the White House too?

As if you and you house boy didn’t!

In a DemocRat Admin, the Establishment Press is a willing accomplice.

In a GOP Admin, the Establishment Press would actually be a potentially useful public watchdog.

This is really rich coming from the liar Crooked Hillary!

I seriously think she ( and aides ) is brain damaged

Yet another classic case of projection by dumbocrats ~

This felonious witch and her rapist husband are the 2 most corrupt people to ever bring their white trash grifting to our Capitol.

How the heck does that statement rate a down vote?

This “woman” has a pair of monster balls. Only a real sociopath like Barack 0bama could lie like she does, like a rug. I thought President Barrack Hussein 0bama had the most divisive administration, what with all it’s racial healing. As for weaponizing the IRS, the Democrats have done that decades ago. Too bad she is so unacquainted with the truth.

After her mischief in the Watergate hearings, why wasn’t she disbarred then?

I think she is acquainted with the truth.

She knows the damage that Obama has caused to people who have done nothing wrong other than being a conservative.

That’s sounds familiar. Where have I heard that before?

You know what else Trump might do? He might waive enforcement of EPA regulations, and give scofflaws letters saying that they’re not going to be prosecuted and should feel free to continue their violations.

Then he might fire a White House contractor, and instead of admitting that he did it to give the job to an ex-girlfriend to buy her silence, he might order the FBI to cook up false fraud charges against the contractor and all his staff and prosecute them, and then tell Congress that he had nothing at all to do with the firing.

I would like Trump to say “Hell Yes!”. You & Bill are first on the list. Followed by Obama, Reid, Pelosi, Boxer, etc… Anybody that went to Washington & became a millionaire on the public’s dime is fair game.

Good thing I wasn’t having a coffee when reading this headline, I would have sprayed the keyboard. This is so rich!

But … but … she’s the smartest woman in the world.

Wow, people listening to her say this could be thinking,

“Well, if Trump will use the IRS to target his political enemies then there is no need to vote for Hillary is there?”

Wonder how she came up with that idea?

I think it more likely that she is preparing her defense in case she looses the election. You know Donald will have the IRS all over the Clinton foundation like flies on a honey bun.

To predict what a Democrat politician will eventually do, listen to what they say the Republican will do if elected.