The nation lost five heroes that day, protecting complete strangers from a sniper. 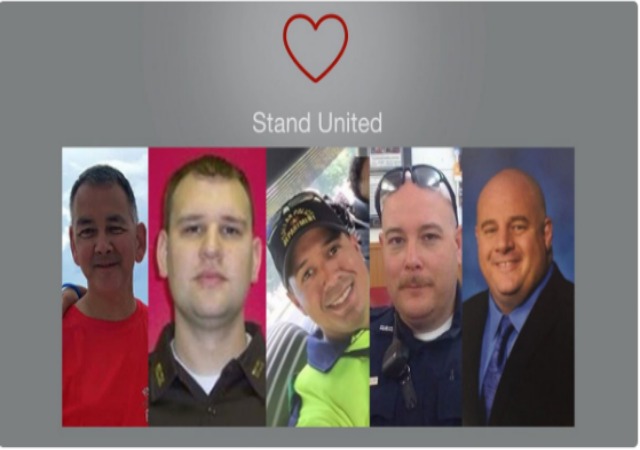 The killings were the deadliest attack on police since September 11, 2001. Their coworkers and family members remember them as “caring, dedicated and professional.”

43-year-old #Dallas transit officer Brent Thompson was one of the 5 killed in #Dallas ambush https://t.co/4EGhQkkOdO pic.twitter.com/uAa96XzLmO

Brent Thompson became the first Dallas Area Rapid Transit (DART) officer to die in the line of duty. He married his wife, a policewoman, only two weeks ago.

“Brent was a great officer,” said James Spiller, chief of DART Police. “He was an outstanding patrol officer as well as a rail officer. We have the highest respect for him.”

He served in the Marines and then became a “private Pentagon contractor that hired and trained Iraqi and Afghan police in the concepts of ‘democratic policing.'”

Patrick Zanmarripa served in the U.S. Navy before joining the department five years ago. The father of two was only 32 years old:

“If you needed help, Patrick would offer you to help and even if he couldn’t do nothing, he would offer it to you. My son — he was — since day one, since he was born he was my little hero and he is a big hero. He’s a big hero now.”

His father tried to convince him to leave the force for a safer job, but Patrick said he wanted to remain an officer because he liked the action.

Michael Krol, 40, only wanted to work as police officer, moving from Michigan to Texas to achieve his dream:

“He got into law enforcement and worked really hard to be a police officer. He spent some time at the correctional facility. It wasn’t quite what he was looking for, so he worked pretty hard to find a job and got one in Dallas,” [Unlce Jim] Ehlke said.

We are deeply saddened by news #LU alumnus Michael Smith was one of the police officers killed in Dallas shooting. pic.twitter.com/TvannUmCrc

Michael Smith, 55, joined the Dallas Police Department in 1989 and served in the U.S. Army for seven years:

A native of Port Arthur, Texas, Smith is survived by Heidi, his wife of 17 years, and daughters Victoria and Caroline. He was a volunteer at the YMCA and his church, and was involved in working with kids at risk, and once developed a racquetball program for kids at the local YMCA, a Dallas police newsletter from 2009 said.

“He’s just a really nice guy. He loved his wife, loved his daughters. He spent time with his family. The whole situation is really sad,” Vanessa Smith, a friend of the officer’s wife who is not related to the family, told The Associated Press.

Dallas Officer Lorne Ahrens was a "gentle giant" whose biggest priority was being a good dad https://t.co/125bRKEmGw pic.twitter.com/g7XPtGiXUi

Lorne Ahrens, 48, joined the department in 2002 after he worked for the Los Angeles Sheriff’s County for eleven years. He worked near his wife Katrina, a police detective, and leaves behind two children:

“I had the honor of working with Lorne at LASD’s Lennox Station in the early 1990s and at Lancaster Station in the late 1990’s,” Gunn told CNN. “I was a young deputy and he was a law enforcement technician, assigned to input and dispatch calls for service at both stations.

“He was the kind of guy that it made you happy when you got to work and saw he would be working the shift with you. You could count on him to do the right thing, the right way. He was a dedicated professional. He was well-grounded, seeing the world the way it really, is but not letting the evil in the world discourage him from doing good.”

May the Lord receive them, and may He comfort their colleagues and families.

Thank you for sharing their stories