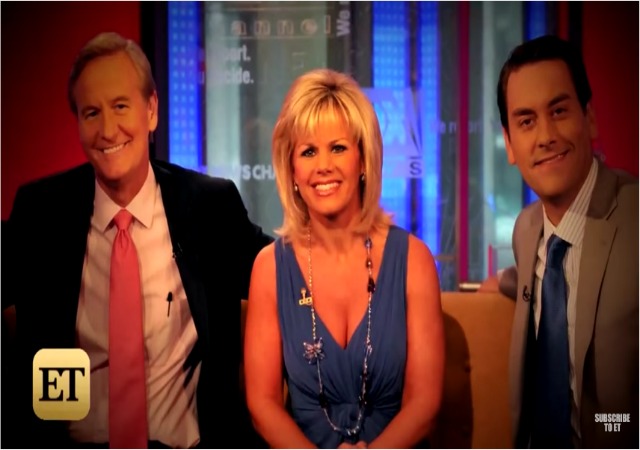 She claims he fired her after “she complained about a hostile working environment” and refused to sleep with Ailes.

“Ailes has unlawfully retaliated against Carlson and sabotaged her career because she refused his sexual advances and complained about severe and pervasive sexual harassment,” the complaint read. “When Carlson met with Ailes to discuss the discriminatory treatment to which she was being subjected, Ailes stated: ‘I think you and I should have had a sexual relationship a long time ago and then you’d be good and better and I’d be good and better,’ adding that ‘sometimes problems are easier to solve’ that way.”

She said her former Fox & Friends co-host Steve Doocy made “a hostile work environment by regularly treating her in a sexist and condescending way, including by putting his hand on her and pulling down her arm to shush her during a live broadcast.”

The suit also states that “Doocy yanked Carlson’s arm down to silence her during a live telecast” and even “mocked her during commercial breaks.” She said Doocy “refused to engage with her on the program.”

Ailes allegedly called her a “manhater” and “killer” when he heard about her complaints. In retaliation, the network did not give her lucrative assignments and pulled her weekly appearance on The O’Reilly Factor. They gave her the show “The Real Story with Gretchen Carlson,” but she believes lowered her profile at Fox News. She also claimed:

Among other charges Carlson levies on Ailes: “Ogling Carlson in his office and asking her to turn around so he could view her posterior;” “commenting that certain outfits enhanced Carlson’s figure and urging her to wear them every day;” “commenting repeatedly about Carlson’s legs;” and “lamenting that marriage was ‘boring,’ ‘hard,’ and ‘not much fun.’”

The network did not renew her contract when it expired on June 26.

As you may have heard, I'm no longer with @FoxNews. I value your support and friendship so please stay in touch: https://t.co/R7JBTsvYSh

Her legal counsel says more women have contacted them about harassment they have received from Ailes:

“Several women have called us and have asked us if they can relate their similar experiences,” said Nancy Erika Smith, an employment litigator for Smith Mullin, P.C., who is part of the team handling Carlson’s case. “That certainly is relevant in the law. The law allows us to bring other victims of similar harassment for the jury to see that this is a pattern of behavior.”

Whatever was happening offstage, she was upbeat on screen. She’s a pro.
She’s not the only looker at that station. Which means either Ailes had an individual fixation, or other stories are backed up waiting to pop loose.
Or, maybe it’s false.
These days…..

pretty unsuccessful way to marginalize talent – giving them their own show? Her claims stink without witnesses and further backup. I supposed he refused to pay her $$$$ as well? No? Well….good luck getting work now outside CC. Hello Alysin Camerota, marginal talent!

Carlson was a damned good presenter, smart too. One bet is that other such cases of such harassment at FNC will pop up before long.

Ailes and FNC might be riding for a huge fall based on what Carlson is saying; I believe she’s telling the truth about why she was pushed out of FNC!

I have no idea who is telling the truth, but Carlson never struck me as a fabricator.

So the believability of a suit like this (in my opinion) is directly related to the number of third-party witnesses who do *not* have a direct financial interest in the outcome. Right now that seems to be a number very close to zero. Having other wannabe members of the suit as Ms. Smith suggests does not really apply much credibility to the original accusation unless they too are supported by objective evidence.

So she was let go at the end of her contract because her numbers were way down, and one of her co-workers on screen once touched her arm. Really? That seems small potatoes for the amount of cabbage she’s wanting out of the suit.

He’s no Clinton or Letterman or Polanski… If the allegations are true, what was he thinking? He must know that Americans will hold him accountable. If he wanted to live a liberal lifestyle then he chose the wrong team.

Fox news has regressed ever since the 2012 election. Carlson was one of the better on air personalities, far superior to Doocy and his son. Since she alleges his conduct was ongoing for months, if not years, can a leaded recording aired on MSNBC be far off?

Fox, NBC, CNN, ABC, the whole bunch of executives and on air “talent” are in the same circle of vultures out there in the Hamptons. A pox on all of you.

I don’t know. I wasn’t there. But when she came out in favor of an assault weapon ban, or a ban on the AR15, I kinda, sorta chucked her to the dust bin . . . well before the Roger Ailes dust-up.

Agreed. Plus, being female myself, I get highly suspect of women who cry “foul” about playing with the Big Dogs and then they get fleas. And I’m especially tired of seeing these young women dress like tramps. Many of them are wearing what is essentially a large napkin for a dress then they wonder why men don’t treat them respectfully!? H-e-l-l-oooo!

That anti-gun rant was almost like her Swan Song entitled “Hey! MSNBC! Look at Me!”

These matters usually end with a whimper rather than a bang. Ms. Carlson will receive a hefty cash settlement from Newscorp and a confidentiality agreement to sign. It may never get to the point of even deposing Mr. Ailes.

I think her high powered law firm is expecting the same. Surely they have some hand in the content and manner things have leaked to the press, all of a sudden. It seems almost cartoonish to me. Soles may be creepy. But is he stupid? He seems more clever to have built some thing that completely turned the tables on CNN.

You think a four-person shop in suburban New Jersey is “high-powered”?

11 years. Reports misconduct only after she is let go.

So, in other words, the misconduct was fine as long as you were getting paid…

Sounds like a recruiting poster for the world’s oldest profession . . .

Carlson’s report of a statement by Ailes that they should have had a sexual relationship already is a little like the famous line in the movie “My Cousin Vinnie” where the kid says “I shot the sheriff?” when he was replying to what the cop asked him, not making a statement of guilt. A person can actually say something in fun but when written down becomes something entirely different than when spoken in jest. At 76 years old Ailes doesn’t seem to be the predator that Carlson paints him to be. In the last few months of her show, she became more of an MSNBC type than a FNC gal.

I don’t believe Carlson. None of her story adds up.

Sounds to me as though Gretchen was pretty full of herself. Who complains about being marginalized upon being given their own show?With others on the show trying to get her to hush up and then her recent stand against guns, it sounds as though she dug her own exit hole and is now looking for someone to blame. Pity she fails to see how her actions now in making these accusations only serves to make her unemployable elsewhere (which also serves to support the idea that she is full of herself).

The first thing to be litigated is the competence and jurisdiction of a New Jersey Court to try a complaint under a New York City Ordinance.

Never liked her and wouldn’t watch her program. She struck me as a lightweight – which is actually the trend of Fox News these days. I find myself staying with FBN most of the time.