Bavarian premier: It’s “important to look ‘reality’ in the face.” 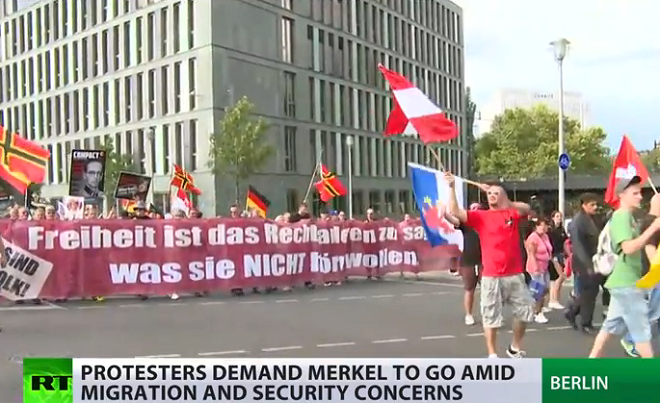 A great many Germans seem angry with Angela Merkel and would like her out of office:

Merkel’s premiership is hanging by a thread today as thousands gathered to call for her resignation while a key political ally dramatically withdrew his support over immigration policy.

More than 5,000 protested in Berlin and thousands more throughout Germany over the ‘open-door’ policy that many have blamed for four brutal terrorist attacks that left 13 dead over the last month.

The Chancellor faced a fresh wave of fury after it emerged that two recent terror attacks and a third killing were carried out by men who entered the country as refugees.

This outcome was not hard to foresee. The combination of a wave of refugees—many of them young men—from Muslim countries, the inability of Europe to properly vet or track them, and the calls by ISIS for them to attack Europeans in their host countries have made for a toxic brew. Even though the vast majority of the newcomers are law-abiding, there were always going to be a significant number who would take up the jihad call.

Merkel is determined to forge ahead nevertheless. However, the defection of one of her key allies—Horst Seehofer, the conservative premier of Bavaria (where most of the recent attacks took place)—may end up being the straw that breaks the Merkel coalition’s back:

Speaking after a meeting with the Bavarian government in Tegernsee, he added that the solutions to date were ‘too inadequate.’

Stressing he had no wish to start a quarrel with Merkel’s party, Seehofer said it was important to look ‘reality’ in the face.

An axe rampage, a shooting spree, a knife attack and a suicide bombing in the span of a week stunned Germany, leaving 13 people dead, including three assailants, and dozens wounded.

Three of the four attackers were asylum seekers, and two of the assaults were claimed by the Islamic State group.

But to look reality in the face is something that Europe—and the U.S.’s Democratic wing—has been very reluctant to do. You can see the strain in a recent speech by Merkel:

…[I]n a powerful speech on Thursday, Merkel said that she would not allow jihadists to keep her government from being guided by reason and compassion.

‘Despite the great unease these events inspire, fear can’t be the guide for political decisions,’ she said.

‘It is my deep conviction that we cannot let our way of life be destroyed,’ she added.

Most critics of Merkel would probably say that they are the ones being guided by reason and compassion, and that the two must be in the proper balance so that compassion does not overshadow and overwhelm reason. They would also say that it is the entry of so many jihadi- and/or sharia-promoting newcomers that threatens to destroy the German and Western European way of life, not the reduction in the flow of those newcomers.

I read a report from England that said the Suicide Bombings are a result of the failure to integrate because The people int he host country are too racist and not open to letting them integrate. Basically, If you can’t get along its ok to blow yourself up and kill.
Liberals are absolutely retarded. Someone needs to take their crayons away.

…[I]n a powerful speech on Thursday, Merkel said that she would not allow jihadists to keep her government from being guided by reason and compassion.

“We can do that, all by ourselves!”

The Twilighters and anti-native factions are projecting their bigotry/sanctimonious hypocrisy to hide the consequences of withdrawing honest brokers from Iraq, progressive wars, opportunistic coups, carrying out social justice through sodomy sessions and mass abortion, and other crimes against humanity throughout the Middle East, Europe, America, etc.

I wonder if they can abort/plan enough native born, import enough aliens, and redistribute enough change in order to secure democratic leverage.

Only if you’re aborting her career.

Those red, yellow, and black Nordic Cross flags are interesting. That was the flag the July 20th plotters were planning to replace the Nazi flag with. I’m guessing it’s an indication of dissatisfaction with the current government.