“That’s what dads do — they pass the best of themselves to their kids.” 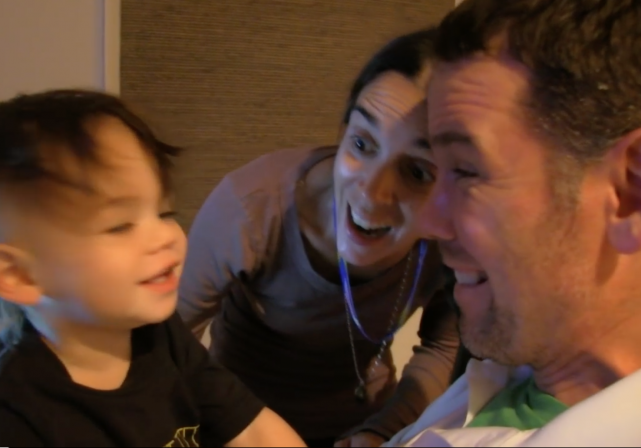 Former Saints defensive back, Steve Gleason, was diagnosed with Amyotrophic Lateral Sclerosis (commonly referred to as ALS or Lou Gehrig’s disease) at the age of thirty-four. He was given five years to live.

But that hasn’t stopped him from living life to the fullest. Turning a devastating prognosis into a life overflowing with love and purpose, Gleason and his wife captured bits of their incredible journey in the upcoming documentary film, Gleason.

Shortly after being diagnosed, the Gleason family learned they were expecting their first child.

According to Team Gleason:

Determined to live his remaining years to its fullest, Steve goes on an expedition to Alaska, creates a foundation to help other ALS patients, repairs a rocky relationship with his father and embraces new technologies to help compensate for his deteriorating physical abilities — all with Michel’s unwavering support. Brimming with humor and heart, this inspirational documentary follows a man who battles overwhelming adversity to find his true purpose in life.

Amazon Studios picked up rights to the film which will be released in select theaters July 29.

I applaud the courage of Steve Gleason.Moreover, your wife will be you’re ROCK from daily living.like getting dressed to eating food, but a foundation of love that will sustain you in the darkest moments you will confide to her loving heart and wisdom and those precious moments of love and faith will be the greatest gifts a man and wife can share.

I know this as I suffer from A.L.S.