Comey: “a terrorist diaspora out of Syria like we’ve never seen before” 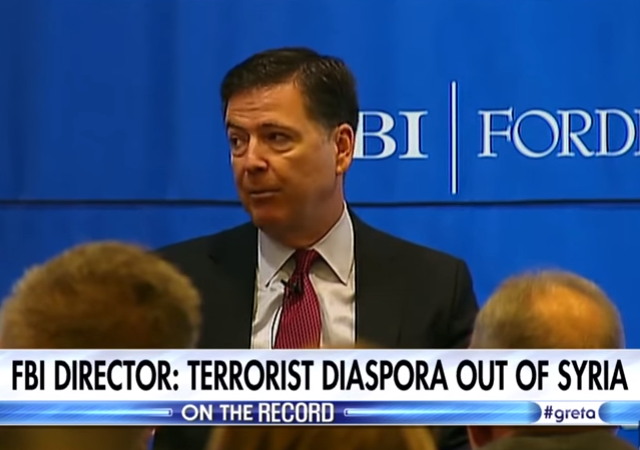 Last week while all eyes were on the Democratic National Convention, FBI Director James Comey made an alarming prediction about possible new developments with ISIS and terrorism.

He suggested that if and when ISIS is crushed in their Middle East strongholds, there will be a terrorist diaspora that will spread terror agents throughout the West.

FBI Chief Warns ‘Terrorist Diaspora’ Will Come to the West

Hundreds of terrorists will fan out to infiltrate western Europe and the U.S. to carry out attacks on a wider scale as Islamic State is defeated in Syria, FBI Director James Comey warned.

“At some point there’s going to be a terrorist diaspora out of Syria like we’ve never seen before,” Comey said Wednesday in New York. “We saw the future of this threat in Brussels and Paris,” said the head of the Federal Bureau of Investigation, adding that future attacks will be on “an order of magnitude greater.”

Comey’s blunt warnings echo those of Republican presidential nominee Donald Trump, who has scoffed at Obama administration efforts to defeat Islamic State extremists in Syria and Iraq. Nonetheless, the FBI chief’s comments reflect a consensus among U.S. intelligence officials that the group inevitably will strike out abroad as it continues to lose ground militarily under attack from a U.S.-led coalition…

Comey, who called violence directed or inspired by Islamic State “the greatest threat to the physical safety of Americans today,” said that “a lot of terrorists fled out of Afghanistan in the late 1980s and early 1990s. This is 10 times that or more.”

In his remarks at a conference on cybersecurity, Comey also cited the difficulty of heading off what are often called “lone-wolf” attackers acting on the group’s calls for violence.

It is “increasingly hard” for counterterrorism officials to find and stop individuals inspired or directed by Islamic State who use a knife or a vehicle to kill people, Comey said.

Defeating ISIS Will Only Make It ’10 Times’ More Dangerous

Veteran fighters of Osama bin Laden’s Afghan jihad went on to carry out attacks such as 9/11, the embassy bombings in Africa, and the 2000 bombing of a U.S. destroyer in the Gulf of Aden. Comey said the attacks in Paris and Brussels were a preview of a “challenge that is going to come.” The Paris attacks were carried out by Syrian battlefield veterans, and received direction and funding from ISIS’s core territory.

Comey’s warnings highlight an element of the fight against ISIS rarely discussed by President Barack Obama and his administration. The administration and Pentagon have long defined success against ISIS in terms of territory seized in Iraq and Syria. After a single week in which ISIS killed more than 350 people across four different countries, Pentagon Press Secretary Peter Cook told reporters attacks do not “alter the strategy.”

There are currently no public coalition plans in place to deal with Western citizens captured in Iraq and Syria, or to prevent their return to Western Europe. Worse, western European citizens can enter the U.S. without a visa under the Visa Waiver Program.

Of course the Democrat Party didn’t invent Islam, but Democrats (and their counterparts in Europe) have by their policies over many, many years allowed it to proliferate.

If he did nothing else, Trump would serve causes of Americanism by stressing these facts. Hillary in particular has been a big, big cheerleader for Islam. Need proof, google Hillary and UN Resolution 16/18.

I did as you suggested, and boy am I alarmed. What that resolution would do is negate the 1st Amendment for the benefit of Islam. Hillary backed that resolution when (Dec. 2011) she was Sec of State, an office which required, as all federal offices do, an Article VI oath to support and defend the Constitution.

Here is yet another point DJT s/b bringing out.

Stephen Coughlin, an knowledgeable analyst on Islam and a person I’ve come to respect greatly, said this,

As Secretary of State, Clinton promised an international Islamic organization in 2011 that the United States government would “use some old-fashioned techniques of peer pressure and shaming” to intimidate Americans who improperly criticize Islam or Muhammad.

Another reason to carry….

So what does this responsibility dodging director advocate? Should we apologise now or wait until hillary is elected? It’s funny that he offered advice on the hillary felonies and how not to go forward with a trial and why. But on national security and terrorism he leaves us hanging about what we should do. That’s like the TV ad where the bank is being robbed and there is a guard standing there and a customer ask why he isn’t doing anything. The guard says he is a “Monitor” not a guard and that he only call a robbery when he sees one. He then says it is a robbery. Hello to Mr. Comey!

At this point what difference does it make?

Yet another up vote for Va. Gent.

Perhaps Comey did not get the memo. I have heard from a good source that air conditioning is a far bigger threat than ISIS. And, these A/C units have already infiltrated the neighborhoods. I even discovered one near my house.

Is Comey attempting to rehabilitate his reputation? Did the FBI just discover this threat? How about policies to NOT investigate Muslim suspicions? The ISIS threat has been in place and growing for years. Open borders anyone?

What is the administration’s agenda now? Make me think the Democrats are serious about national security? Hillary to the rescue?

No kidding, Comey!!!! Tell me something I haven’t known for years especially since the FBI failed to take some terrorists off the streets before the killed people here. Wake me up when you feel competent enough to do your job right.

Is he some quota guy? Does he wear dresses or something?

Diaspora. Diaspora? Curious use of this term, commonly used in reference to the Jews. I’d say “terrorist invasion” would be more appropriate.

Comey is not allowed to use the word “terrorist.”

I’ll somewhat echo rabidfox & only add that Comey is yet another example of failed Institutional leadership. Given the history of the last number of years for an FBI director to come out & state the obvious ; then to have that statement be hailed as a breakthrough insight says more about the ongoing collapse & the overall failure of Institutional leadership than anything ,else possibly could.

There is nothing in the history of the FBI in the last decade to indicate that they will respond in any way to Islamic terrorism in the United States. They have proved beyond any question that they will ignore their oaths, their mission, and the law in order to please any Leftist politician.

We can criticize the FBI without being silly….

“They have proved beyond any question that they will ignore their oaths, their mission, and the law in order to please any Leftist politician.” The FBI.

I am not a conspiracist but if you really want to see the depths of the FBI and how they are a political machine read Jack Cashill’s “TWA 800” about the downing of the TWA 800 747 off of Long Island NY. They are worse than the KGB and bill clinton not only controlled the entire investigation but appointed all of the people who investigated it and most had no aviation experience. For the first time in our aviation history, the NTSB was not the primary investigator of the crash. It is a must read and he has just released a new book about it with new revelations coming from the FOIA. This makes the Benghazi scandal and cover-up look like a children’s party. I am a retired airline pilot and I can tell you that there wasn’t a single pilot that I knew who believed that TWA 800 blew up because of the center wing fuel tank exploding. Then you have to consider the MLK debacle of the FBI’s treatment of him along with their failed forensic lab that caused hundreds of settled trials to have to be re-opened because of their lies and incompetence. There are the 900 FBI files on prominent Republicans that hillary had when she was first lady that she should have never been able to obtain. Remember the Anthrax scare and how the FBI hounded that professor unmercifully for years even though it was obvious he didn’t have any part in it? Then there are all the terrorists that they have been warned about that they ignored or declared not a threat. Ruby Ridge and Waco. The list goes on and on about how the FBI is an incompetent political organization. If we thought the IRS was bad and dishonest think of what the FBI must be like behind closed doors!

Didn’t the FBI also have a role in the investigation of Ron Brown’s 1996 “accident” and the sudden disappearance of ALL of the autopsy photos and sudden silence of all investigators? The MSM never asked even one question.

Then why the hell did he help the person who isn’t going to do anything about it to get elected? Just like John Roberts, he had a singularly unique chance to change the course America is heading, and he froze up.

Because Comey has this breathing habit that he’s come to like.

Corey’s suppleness has turned the FBI into the National Enquirer of law enforcement. Did Jeh Johnson have the day off?