There is nothing funny about killing an unborn child 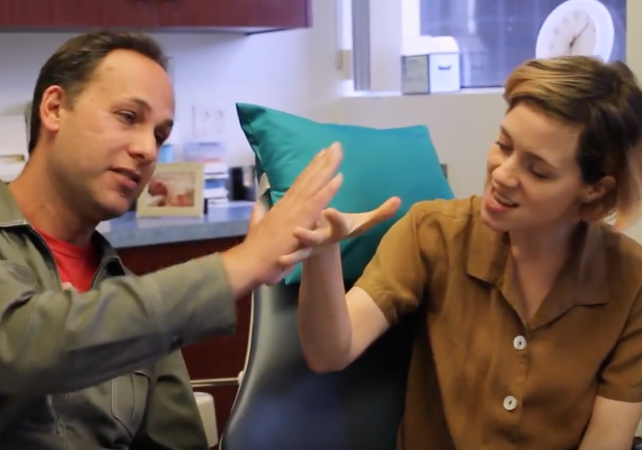 Some of the best comedy is irreverent. I get that. That said, I’m hard pressed to find the humor in killing a child to avoid responsibility, particularly as one wiggles around in my womb.

The result? A video bemoaning the tedious bureaucratic process required to kill an unborn life. Because it’s so.hard. to sit through a five minute spiel informing women of abortion risks and an explanation of their baby’s developmental process.

NARAL’s ad is a snapshot of how the pro-infanticide movement views abortion. Void of humanity, or willingness to consider the purpose of the life ended for the most selfish and vain of reasons, just the insistence that it’s a woman’s choice to kill their child, or not. But the “or not” is mocked as bible-thumping, ignorant idiocy.

Does this mean it is now safe for them to do comedy about Democrats whipping their slaves too?

Sad. Especially sad when she says ‘thank God’ when she’s told she can finally get the abortion she so desperately wants. You know the old saying, ‘be careful what you wish for….’

This is down there with the “No Pressure” video.

People who are that depraved and soulless absolutely shouldn’t reproduce. I just wish they would give the child up for adoption ~

The “final solution” should not only be a difficult choice, but a hard choice, too. The basis for liberty is rights and responsibilities. That said, abortion rites are a symptom, the abortion industry is an opportunity, Planned Parenthood et al is channeling Mengele… the underlying causes of trans-human orientations and behaviors need to be addressed, not normalized/promoted.

That the gift of life is a gift from God. That the most defenseless of our society needs the most protection.That thou shall not kill.These norms and mores are now erased by one depraved video.

Ms Kaye, I so love such a passionate voice for the voiceless. I am horrified and disgusted by the term “Pro Choice” because there is always a person involved who ends up having no choice at all.
Thanks for speaking for them.

Thankful to be able to.

Hey, why don’t you guys work very, very hard to teach sex education and generously fund contraception so that abortion is ‘safe, legal & rare’. We could reduce the number of dead ‘babies’ enormously. If you have got a problem with that, then admit that the abortion argument is about sex; not babies.

I also have my doubts about how pro-life most of you are. Nobody seems to care much about the ‘babies’ after they are born. Yeah, you have heard that before. Doesn’t make it any less true.

I am a strict believer in the 1st Amendment. The state cannot establish a religion and the sentiments expressed in these comments are religion.

Oh, yeah – I vote on pro-choice the same way you vote the NRA ticket.

Trump used to be pro-choice. I guess he had an election year conversion.

Actually, studies out there do demonstrate that passing out contraceptives leads to more pregnancies, not less, more diseases, not less.

The Catholic Church does have programs for babies, and mothers who have survived abortions. Get some education.

The point of sex is babies. Not until the 1930 Lambeth Conference of the Anglican Church was sex for procreation separated from sex for recreation, in the eyes of Protestants. To be sure, there are many positive benefits of sex for married couples, besides creating a new human life, and unmarried couples can garner some of those benefits, but the point is babies.

“I am a strict believer in the 1st Amendment. The state cannot establish a religion and the sentiments expressed in these comments are religion.”

The video portrays a well-off couple, apparently educated about sex and with resources to buy contraception. In fact, the point seems to be to portray them as so much more sophisticated and enlightened than those who oppose abortion. Their problem is not that they’re poor and ignorant. Their problem is that they are inconvenienced.

Senator Bluto Blutarsky in reply to OnlyRightDissentAllowed. | July 13, 2016 at 9:50 pm

If you wanted to know how rare abortion is in the US, here’s a quick comparison. There have been 1.35 million wartime fatalities in the US military. That’s since 1776.

Now on to “safe”. As you are no doubt aware, SCOTUS struck down a Texas law increasing medical standards in the abortion industry. I find it darkly amusing that progressives want to regulate everything extremely strictly save for abortion.

The only possible argument you have is pure economic conjecture because abortions have steeply declined along with live births due to the current economic slump. If-and only if-these babies had been born, you may have had a concrete argument, but as it stands, we are in a economic and demographic dilemma already with immigration and welfare costs being borne out by an aging native population.

With that in mind, what is your solution?

Abortion is a terrible thing and I don’t think a person can do it and walk away without emotional baggage. The demorats are trying to make it look easier that it is for a person with half a brain. Personally, I wouldn’t want to be raised by two self centered people who cared that little about me.

Well, the good news is their DNA is out of the gene pool.

Ignoring the nature of the ad, the jokes actually aren’t all that funny.

They are not. In order to find them remotely entertaining one must be proudly ignorant, e.g. “Oh, no, that’s not a baby at all. It’s an apple!”