Because of course he does. 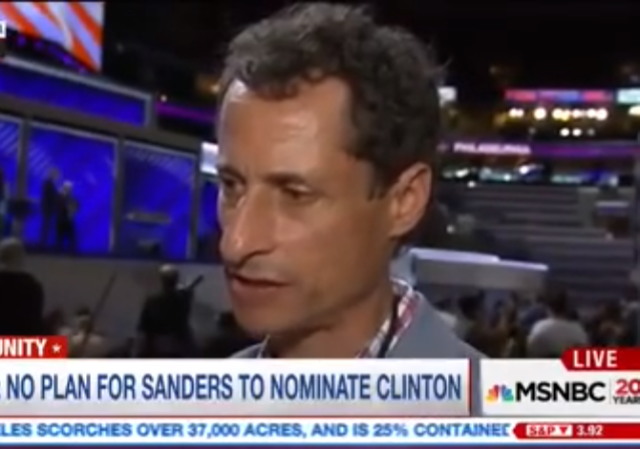 Anthony Weiner, the disgraced former New York Congressman and husband of Hillary confidante Huma Abedin, has (ahem) inserted himself into the debate over the 2016 election.

Weiner has obvious reasons for backing Clinton which go beyond party affiliation and his wife’s relationship to the Democratic nominee. If Hillary wins, Weiner will have access to the White House and a host of new career opportunities.

Even if you take all of that into account however, his estimation of Hillary is a little over the top.

“You take a look at her resume and what she’s accomplished, I think you can make a pretty good case that she’s the most accomplished candidate for president maybe since George Washington,” Weiner said.

The former New York congressman pointed to Clinton’s time as Secretary of State, senator of New York, and first lady as examples of her expertise.

Others who might be considered more accomplished than Clinton before serving as president are Dwight Eisenhower, the commander of the Allied forces that won World War II; George H.W. Bush, who survived being shot down over the Pacific during World War II and served in numerous positions in government; and Ulysses Grant, who served as the commanding general of the Union army that won the Civil War.

You’ll no doubt be shocked to learn this assertion went unchallenged on MSNBC.

Rest assured that if the White House gig doesn’t work out, Weiner has a backup plan.

Anthony Weiner will run for mayor again — but only against Donald Trump Jr.

Anthony Weiner just doesn’t know when to let go — of politics, that is.

The sext-sending former Congressman said Tuesday he would come out of retirement and once again run for New York City mayor, but on one condition: there’s gotta be a Trump on the ticket.

The 51-year-old made the claim as Donald Trump Jr. said he might consider entering politics in 2017 with a run for City Hall.

“I would come out of retirement just to beat him like a rented mule and then I’d turn the keys back over to de Blasio,” Weiner told FOX 5 on the floor of the Democratic National Convention.

Anthony Weiner is one of those failed politicians who will do anything to stay in public life no matter the cost to his dignity.

How, and why is this serial deviant allowed anywhere near the D convention? Sure, make him the “face” of the campaign!

Why not? They had a serial rapist speaking last night.

The Repugs are running an admitted serial philanderer and grifter. All Weiner did was tweet some pictures. Hmmm, I wonder which is worse?

I was referring to BJ Clinton. You may get your britches in a wad about the way Trump talks to/about women, but I suppose it’s really for them to decide whether they like it or not.

BJ Clinton, on the other hand, has a long string of abuse and rape allegations behind him. And Hillary has made a career out of destroying the lives of those women in order to protect Bill and her own fortune.

The Clinton’s leave a trail of stink and corruption behind them kinda like my old Labrador Retriever trailing a stinky fart when he lopes across the living room.

Democrats truly live in another dimension. The Twilight zone.

It is a cult rife with narcissism, corruption and denial.

You are by far one of the best writers/contributors on this site. The Professor did well; your posts here, and on College Insurrection, are superb.

Their delusional thinking is hilarious.

No so delusional. It harkens back to Mafia gangster Meyer Lansky claiming he is a legitimate businessmen living on a pension.

Hillary has accomplished something everyone thought was impossible. She has made it possible for progressives to hate a woman who aspires to power.

I think Carlos Danger has it wrong. hillary is more like Benedict Arnold than GW. Arnold was a man who got into debt and lost his fortune and felt he did not get the credit/promotions he deserved from the Continental Congress so he sold out literally to the British for money and rank and in the process betrayed his country. Sound familiar?

The moron inadvertently reinforced Washington’s cache as a Founding Father – something leftists have been trying to destroy.

Rumor has it that A. Weiner will play Deputy Barney Fife in a Mayberry movie 😉

He’ll have to get more manly to play Barney.

George Washington had tons more integrity than these bastards.

Having been proudly called, “You little bastard” since age four by the lady next door, I resent you including those assholes in my category. Micro aggression….where is my safe space? LOL!

I recently found out about all the non government lies that Hillery has told. That with her paranoia and other symptoms makes her a paranoid schizophrenic. The Dems have nominated a psycho.