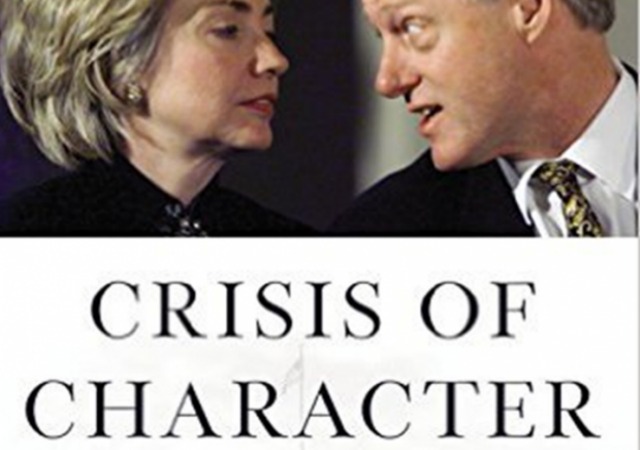 While traveling back home from a conference in Atlanta, I had a chance to read the new book Crisis of Character: A White House Secret Service Officer Discloses His Firsthand Experience with Hillary, Bill, and How They Operate by Gary Byrne.

Byrne’s book is a gripping read, as he conveys his personal history to join the Secret Service, his time at the White House, and his decision to join the Federal Air Marshals Service. However, it is not an easy read, as it is difficult to learn of how the Clintons and other elite politicos disdainfully treated patriotic Americans such a Byrne, who want only to serve their country.

The author has already discussed his book on numerous venues (but notably not on mainstream media outlets), and has focused on his troubling experiences with Hillary Clinton during the interview. He was inspired to write this history because Clinton is poised to be President, and Byrne describes her as “divisive, abuse, and paranoid.”

However, I would like to share a bit related to the chapter entitled “The Vase.” One morning in 1995, the White House staff was treated to a reverberating verbal battle between the Clintons. The row then evolved into something more physical. After a resounding crash, the Secret Service agents were obliged to investigate the source of the sound.

Byrne discovered the shattered remains of a historic vase packed away in the curator’s office. He also noted that Bill Clinton came in the next day with a big black eye not well hidden by makeup. When Byrne commented about Clinton’s bruise to the president’s personal secretary Bettie Curie, she dismissed it as a coffee allergy.

So, the Secret Service officers had to figure out what to do when the President’s wife posed a physical threat to the President.

Here are three mental exercises I would propose that Legal Insurrection readers put to those they know who are voting for Hillary Clinton:

The remainder of the book describes Byrne’s entry into the Federal Air Marshals Service. In a way, this portion of the book is even more disturbing that the White House chapters. The author describes how educated, elite bureaucrats undermine the mission of the Air Marshals with politically correct rules and dismissive attitude when challenged by those who actually have to carry out the missions.

I recommend Crisis of Character for its clear writing and descriptions of life for a patriotic American genuinely interested in public service among the political glitterati. Though Byrne had the help of another writer (Grant M. Schmidt), I would like to commend him (as he suffers from dyslexia) for creating such an engaging read.

Bravo, sir. And thank your for your service to our nation.

Byrne gives us a front seat to the “Clinton Circus.” When Americans vote this November, they will have to decide if they want this circus to come back town.

When Jackie Kennedy was first lady some of you will remember she redecorated the White House thru private donations. The woman was noted for her style, class & good taste.

I have to wonder if she acquired that vase?

Reading the book now and there isn’t much new about the Clintons. What is new, it the extent to which WH employees went to keep the office of the president dignified only to have the end result being a massive exercise in enabling the very behaviors which caused the problems in the first place. These employees did what they did to keep their jobs. I’d add another question. How can the American public trust gov employees to do the right thing when, in spite of what they saw, they didn’t at least quit? I knew before those 2 entered the WH what was going to happen, so nothing surprised me. Anyone who works near those 2 will get dragged down with them.

” When Americans vote this November, they will have to decide if they want this circus to come back town.”

And the GOP establishment wants that circus to return to D.C. It could not be clearer why the last two GOP candidates were Cruz and Trump. The establishment GOP is corrupt to its core and needs to be destroyed.

While I agree that the GOP needs to be destroyed,I just hope that we don’t destroy the country as well.

Our country will be destroyed for sure if we allow corrupt, malignant GOPe worms to continue to hog the leadership positions of OUR party – the only opposition to the left’s goal of ruthless fascism.

Destroying the GOPe won’t destroy our country – it will likely save it.

Your writing and the topics you cover are always relevant, timely and delivered with objectivity.

You (and Branco) are one of few reasons I still stop by LI on occasion.

I will check out Crisis of Character based on your recommendation.

Thanks so much for your kind words. They are very, very appreciated. Have a Happy July 4th.

I’m not sure why those ??? are showing, I entered a thumbs up!

The real question is what is Byrne’s credibility. Why should we give what he writes any credence? Just because we want to? When someone says discreditable things about a discreditable person it’s easy and comfortable to just accept them as true, but that’s a trap one must avoid. The standard of evidence to support such allegations doesn’t change just because their object is disagreeable.

(An extreme example to illustrate the point: This is why so many people believe the myth that the Nazis made soap out of Jews. This was a false rumor that swept through Auschwitz, where of course nobody had any trouble believing it. It’s not as if the Nazis would have had any moral qualms about doing so. It’s not even as if the thought never occurred to them. They tried it, and found through experiment that it doesn’t work. But the bottom line is that no matter how bad a person is, allegations against him must still not be accepted without proof.)

In this case some of his stories contradict his sworn testimony 18 years ago. For instance he testified that the Mondale story was just a rumor that he’d heard, but now he claims that he walked in on them. And it’s hard to understand how a uniformed guard would ever be allowed to walk in on the president in the first place, or even to stand outside a room that the president was in. How would he ever have been in a position to see the things he claims to have seen? So it would seem that this book has to be taken, if at all, with a huge dose of salt.

That was the failed experiment I mentioned. A small-scale experiment, using Polish prisoners, very late in the war. The rumour that circulated in Auschwitz, and which is still widely believed, that the soap in the showers was made from camp inmates was completely false, but also completely plausible. See this detailed and authoritative treatment of these two distinct cases.

From the WiKi page: “Aldrich served in the FBI for 26 years and was assigned to the White House bracketing the Reagan and Clinton Administrations. In his White House post, he was the responsible for background checks for positions including White House Counsel, Chief of Staff, Secretary of State, Attorney General, FBI Director, and other cabinet posts.”

My question remains the same: “Why isn’t this vile, venal witch Hillary in prison already?”

People have been asking that since 1992, and the answer is the same: she doesn’t mind that everyone knows what she has done, because she’s very good at hiding the evidence. She constantly makes the issue about the coverup rather than the underlying crime, which lets people think that — as was the case with the Watergate break-in — the underlying crime was something petty and not worth considering. By putting up multiple layers of coverup, investigators and the public interest are distracted into looking into those, and the original crime is forgotten.

Ask the hacks of the GOPe:

Lord Acton presents us with a scary thought, when you apply it to an already corrupt Hillary Clinton: Power tends to corrupt, and absolute power corrupts absolutely.

None of this surprises me and, quite frankly, I hope the public gets to see more of this. I remember all kinds of gems from when I worked with the government including one government “official” state “The law requires that we provide the public with this information. Nowhere does it state that the information must be accurate.”
>
One of the best things that could happen is for the public to see how their government really functions and how incompetent they really are. In another example I had various people assigned to me to oversee my work. Twice in a three year period I was introduced to new pople who proceeded to tell me that they knew nothing about what I did, the regulations governing the work that I did, and that they were depending upon me to teach them their job. In another case, I have had government auditors ask me to help them audit my work because they knew nothing about it and, in the most absurd example of all, I even got into a regulation dispute with another group in the company so my boss, trying to resolve the issue without my help, submitted a formal interpretation request for the regulation in question as it pertained to this situation. A few days later, the government subject matter expert called me up from Washington to ask about the regulation and the issue and then asked me to write up the interpretation which he then gave to his boss who then sent it to my boss who then gave it to me and said ‘Well I guess they are siding with you in this one”.

Be sure to read “Dereliction of Duty” by Lt Col Buzz Patterson too! He carried the nuclear football for Clinton for 2 years and discusses the national security risks, lavish spending, frequent DNC related trips on Air Force One and the time Bill could have taken out bin Laden but wouldn’t break from his golf game. He also has a whole chapter about Hillary and how terrified the White House staffers were of her.