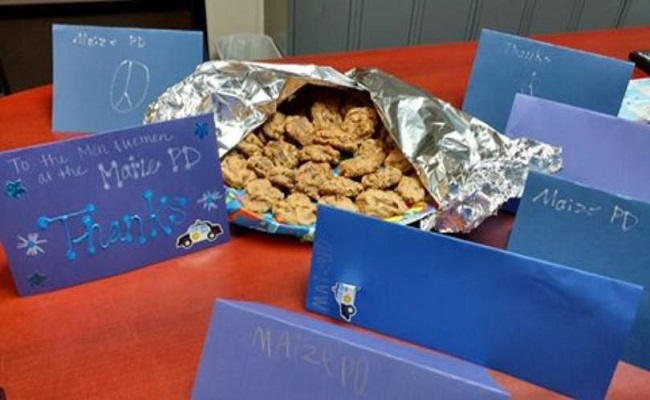 The horrific Dallas massacre of peace officers has resulted in an amazing outpouring of support not only from celebrities and politicians but from ordinary people all across America who are reaching out to show their support for and appreciation of their local police departments.

In Dallas, crowds gathered to hug and say “thank you” to Dallas PD:

Police Chief David Brown received a long and loud round of a applause before he spoke at a midday, citywide prayer service here. Police work is a job where you seldom hear the words “Thank you,” he said.

The hundreds of residents who packed Thanks-Giving Square Park in downtown Dallas responded with a resounding, “THANK YOU!”

After the service, which featured remarks from faith and civic leaders, musical tributes and prayers, many of those in attendance stood in line to offer their personal thanks to men and women in uniform. Soon, everyone started hugging.

In Alabama, a “thin blue line” initiative has been picked up by Alabamians eager to show their support and respect for local law enforcement:

A Texan has developed the “Safe Harbor Initiative,” using the “thin blue line” as a signal of support to community police officers, and many Alabamians are participating.

In a post on Facebook, small business owner Anthony Welichko explained what officers could expect when they see a thin blue stripe spray-painted on the curb in a neighborhood.

To all law enforcement who see this line, know that the residents of this home appreciate your service and dedication to keeping the peace. Know that when you enter the neighborhood and see these lines that you are not alone or without “back-up”. We do not need the media to make our voices of support for our police and emergency services heard (though it would be nice). Lastly, if you are in my neighborhood and mean to harm a member of law enforcement, know that decision may be hazardous to you health as someone has that officers back!

Welichko’s post has been shared over 80,000 times, and thin blue lines are already starting to show up on curbs in neighborhoods across the state.

Others in Alabama are replacing their porch lights with blue light bulbs and wearing blue clothing or ribbons to show their support for police officers.

Individuals across the state are doing their part to show support for law enforcement amid the recent deadly attack on police officers in Dallas.

Dwyer is no stranger to the demands of State troopers. He is a former cadet of the 2014 student trooper program, which aims to increase youth’s understanding of the job of police officers.

Quincy Police got a special cupcake delivery on Thursday. 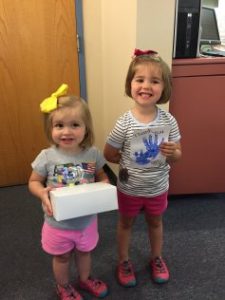 In Ocean Springs, Off the Hook Fish House is serving free means to officers. When asked what led him to his decision, owner Tim Wold said, “It’s because I can.”

OSPD employees enjoy free lunch at Off the Hook Fish House. Owner Tim Wold said: “It’s because I can”. pic.twitter.com/qtR9jZcffo

Around town, residents are bringing snacks to their local police departments.

In Kansas, similar stories are emerging of local residents moved by the tragedy in Dallas to demonstrate their support for their local police officers.

Several police departments went to Facebook and Twitter to show the outpouring of gratitude they have received. The Sterling Police Department says a woman dropped off a gift bag of candy and a thank you card to the department.

Chief Jensby with the Maize Police Department says he was humbled by the support the community showed.

Considering that 26 police officers have been killed so far this year (up 44% from last year), it’s heart-warming to see such an outpouring of support for our nation’s police.

There are some officers who believe themselves self-righteous and high-and-mighty but in the end I will always support them over no-good criminals and terrorist both foreign and DOMESTIC.

Excellent idea! We mustn’t lower ourselves to the level of the Far Left. Just remember, love always wins and kindness is never wasted.

Good job Fuzzy. Thank you.
Thank you to all the police out there holding that thin blue line. I have little good to say about the federal government. Most of you are not federal. But you in the various police & Sherriff department & also the American military have my appreciation & support.

Flags at half staff in Brevard, NC.

Time to bring back “Support Your Local Police” bumper stickers from the 70’s?

The San Diego Union-Tribune had a “thank the Police” editorial, which I thought was good.

In other news, they’ve been chasing (and arrested) a local serial killer that has been attacking homeless people in a heinous manner. The reportage has been focused on the police effort, the help from the community, and the victims.