Hundreds gather to celebrate the life of America’s deadliest sniper 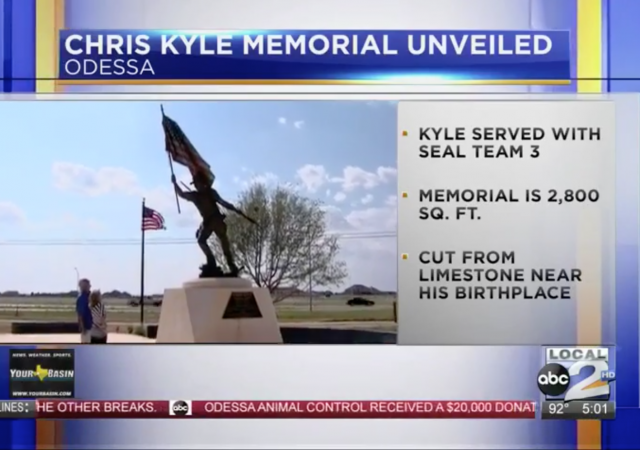 Hundreds of West Texans congregated in Odessa Thursday, birthplace of Navy SEAL, Chris Kyle, to witness the unveiling of a memorial statue.

Constructed of limestone and granite from a local quarry, the statue stands about seventeen feet tall.

ODESSA, TX (KWES) -Chris Kyle is a man many know as the deadliest sniper in U.S. history, an American hero. Now, after years of planning, his statue will stand tall in his birth place of Odessa.

The statue stands 17 feet tall and cost nearly $1 million, but the message behind the limestone and granite memorial will live on for years to come.

“We hope in 50 years and 100 years, other veterans can see this and and go, ‘Hey, this community cared about the veterans that are in that community,” said Chris Kyle Memorial Chairman, Kirk Edwards.

A simple message to show veterans that they’re not alone. It comes in the form of the Chris Kyle Memorial, dedicated to the late American sniper, who served four tours in Iraq and was awarded various medals for his bravery.

“This community loves those who serve, whether it is police officers or veterans. I feel like it’s just showing that they get it. They get what service is, as well as a tribute to Chris,” said Taya Kyle, the widow of Chris.

Hundreds of West Texans from all walks of life gathered to see the big reveal. It was a ceremony of unity to honor Chris and the veterans of our nation.

“The more of the Navy SEAL’s that we talked to, the more military that we talked to that knew Chris, all of them said he wouldn’t want this to be about him,” said Kelly Cook, the landscaping architect for the memorial.

The statue of Chris is the focal point of the memorial, but the rest is filled with critical quotes for veterans and hidden symbolism that only a veteran would know.

In 2015, Texas Governor Greg Abbott declared February 2 (the day of Kyle’s death) Chris Kyle Day. Kyle and friend Chad Littlefield were killed at a shooting range by Eddie Ray Routh, a former Marine, in 2013. Routh was sentenced to life in prison.

[Featured image a screen grab from this video]

You would think that the Commander in Chief of the U.S. military would be present in such an event.
But I am just kidding myself. I know.

If you ever are driving across Texas and get a chance to stop in Odessa, do it. I don’t know if it is still there but on the west side of town on the old business route there is a steak house that is wonderful. Drive around town. It pretty much defines a small American town.