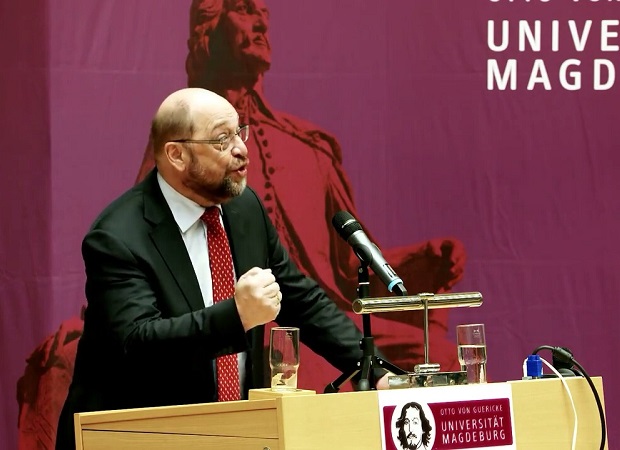 “You never want a serious crisis to go to waste,” Chicago Mayor and long-time Obama confidant Rahm Emanuel once said. Despite being rejected by the UK voters in the last month’s referendum, top bureaucrats running the European Union want to do precisely that. Since Brexit results, they have unveiled plans to build an EU Army, expand the entitlement programmes, and boldest of all — calls to create a unified EU Government, a pan-European Superstate.

What was once confined to the realm of myth and conspiracy theory, is now being proposed from the helm of the EU. On the day of the Brexit result, President of EU Parliament Martin Schluz and German Vice-Chancellor Sigmar Gabriel published a detailed proposal calling for reconstituting the EU into a European Government. Both Gabriel and Schulz are leading members of Germany’s Social Democratic Party (SPD) that is currently in a coalition with Chancellor Angela Merkel’s Christian Democrats (CDU). Having tied its lot to Merkel’s policy of open borders, SPD’s poll numbers have hit a historic low. The proposal co-published by two of the Europe’s most powerful politicians wants to wrest remaining economic powers away from the national governments, creating an ‘Economic Schengen’ zone.

National governments, especially in Eastern Europe, are regarded by Eurocrats as the biggest obstacle in enforcing their open migration and resettlement plan within Europe. The resistance by some member states against Brussels’ migration policy of resettling migrants (mainly young men from Arab and Muslim countries) has been dubbed by Schulz as the “purest form of national egoism”. On Monday, the German newspaper Die Tageszeitung reported the Schulz-Gabriel proposal:

After the Brexit referendum Martin Schulz has been campaigning for a stronger EU. While top leaders of the Christian Democratic Party (CDU) have emphasised on the importance of the nation state, Schulz wants more Europe — and thereby turning into a key figure for the supporters of a stronger EU. […]

It wouldn’t be enough to turn a few screws around this time, Schulz wrote in a debate piece for the [newspaper] Frankfurter Allgemeine Zeitung. “No, we want to raise the stakes that would make it clear that we have got the message (…).” The European Union needs to be reconstituted into a true European Government. [The European Government] must be controlled by the EU Parliament and be subordinate to a second chamber — made up of representatives of the member states.

This suggestion was also listed in the 10 Point Programme Schulz had published together with Sigmar Gabriel, the head of the Germany’s Social Democratic Party, shortly after the British vote. It is a power shift: Away from Markel and EU head of states, towards the EU Parliament and Commission. [Author’s Translation]

Last August when the Migrant Crisis began, Schulz’s proposal for an EU-wide ‘Refugee and Immigration Policy’ was met with stiff resistance from several EU members. Schulz backed German Chancellor Merkel as she arbitrarily suspended the Dublin Protocol, a legal mechanism put in place to register and regulate immigration into the Schengen-Zone stretching across Europe.

What began as the result of Merkel’s unilateral move, could only be described as a full blown invasion of Europe. Over a million migrants, mostly Arab and Muslim men in their fighting age, entered Germany alone — within a span of a following months.

Paris and Brussels were hit by worst terrorist attacks, killing and maiming hundreds. Police investigations later revealed that many of the perpetrators of those attacks posed as refugees to enter Europe. Not just the city of Cologne on the New Year’s Eve, several other German cities witnessed mass sexual assaults on local women by gangs of migrant men.

All these incidents have turn the mood of electorates throughout Europe against a EU-backed generous migration policy, forcing national governments to set up border fences and re-introduce immigration controls.

If EU bosses were displeased by these minor acts of ‘insubordination’ by individual member states, the Brexit-rebellion has rattled the EU top brass. Schulz’s proposal now wants to strip the nation states of their powers to such a degree that would never be able to stand up to the dictates from Brussels ever again.

The question is, will the EU bosses use Brexit to consolidate their hold on European nation states or will the freedom-loving people of Europe rise up to them and won’t let this “crisis go waste”.

Yet another unnatural act being pushed by the left.

This has been the goal all along, hasn’t it?

1) Destroy the unique cultures (French, English, etc.) and replace them with a primitive common culture (Muslim). Then, borders makes no sense.
2) Establish a centralized military so you can station soldiers from Belgium in Spain, etc. for control of the serfs.
3) Brexit fouls this plan up and must be stopped.
4) An armed population in the USA is a BIG problem and must be eliminated. In Europe, not a problem. No arms, no resistance to an occupation army.

Soviet do over but via the Parable of the Boiled Frog. The elites are tired of waiting.

“What was once confined to the realm of myth and conspiracy theory, is now being proposed from the helm of the EU.”

The Brits could see this coming from a long way off, which is why there has been a building movement to leave. This is a non-responsive, self-perpetuating bureaucracy with a vested interest in keeping their jobs as individuals. The smart move would have been to accommodate the legitimate interests of those who criticized them, which might have happened, had the voters any power whatsoever. The bureaucrats will not go easily.

“What was once confined to the realm of myth and conspiracy theory…” No. What is being proposed has long been a goal of various lunatic megalomaniacs like Bonaparte or Hitler.

So they retroactively confirm everything the Exit campaign warned about.

Well now I think there is much more fuel to the Eeww-exit movements.

The question is will they try to prevent a Brexit before it happens by changing the rules?

After a “decent interval” they’ll move the “European” government to Berlin, and Germany will finally achieve victory. Third time lucky.

I am shocked, shocked I tell you.

No, not really, I supported LEAVE and that is precisely why.