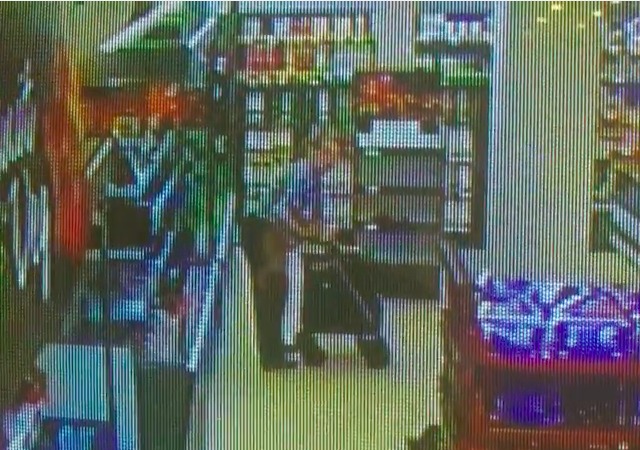 An 86-year-old woman fought off a potential thief with a package of bacon.

The woman took out £250 before she entered the Iceland supermarket in Manchester to buy some groceries. Another woman grabbed her shopping cart and demanded the money.

Instead of giving in, the elderly woman grabbed her package of bacon and whacked the potential robber in the head.

The offender left the store and the elderly woman continued shopping like nothing ever happened. But the police said the woman was “very shook up.” If anyone has information they ask them to contact the police.

Andrew may have to include another chapter in his book.

Two strips of bacon in the morning…

Ahem. You seem to forget whose blog you’re on. 🙂

All the animals that I eat
must chew their cuds and have split feet.
Kosher meat just can’t be beat
so take away that ham.

Take away that pork and bacon,
I won’t eat them, you’re mistaken.
I’m a Jew and I’m not fakin’,
I want kosher meat.

Got no problem with using it as a weapon, though 🙂

Cool! Plus bacon is guaranteed to keep mooslims at bay. EAT MORE BACON. <3

Ahem. You forget whose blog you’re on. 🙂

It also keeps the Jews away, at least those who actually practice their religion.

It just writes itself…

I’ve shopped in UK grocery stores a lot. You never want to get between an Englishwoman and her groceries!

Imagine the damage she could have done with a whole pork loin!

Bacon: Is there anything it can’t do?

Bacon. The most effective counter terrorism device ever invented.

Hopefully in a month and a half I’ll be wrapping it around dove breasts.

I am reminded of a joke, though. A Catholic priest, a Rabbi, and an Imam walk into a Starbucks. The priest asks the Rabbi and the Imam if, come on, admit, they ate bacon.

The Rabbi and the Imam admit that they did once eat bacon. They they ask the priest if he had ever had sex. With a woman.

He admits that in his wild and carefree youth he did in fact have sex with a woman.

“A lot better than bacon, wasn’t it?” the Rabbi and Imam pipe up.

“Hopefully in a month and a half I’ll be wrapping it around dove breasts.”

In my college years I had a room mate whose family owned many acres of citrus groves in the Texas valley. It was a dove hunting paradise. Our freezer was full of dove in the fall, and we would gorge on breasts stuffed with a slice of jalapeno and onion, wrapped in bacon, then coated in a bit of melted butter, wine and garlic, then grilled to perfection.

Dang, why did you say that? My stomach is rumbling now!

I always considered eating dove if you prepare it yourself to be a good way to lose weight.

Now, if someone prepares it for you…different story!

Killing a eating a hog is just sound thermodynamics, any way you cut it.

Thief must be muslim.

If England ever submits to sharia, it’ll disarm all the old women grocery shoppers.

The 1980s called. They want their security cameras back.

Yes Ragspierre I work will work harder for the dove than what I can hope to get out of it. I don’t mind. Maybe the dove does, though.