40 Years Since the Entebbe Rescue Operation

40 Years Since the Entebbe Rescue Operation 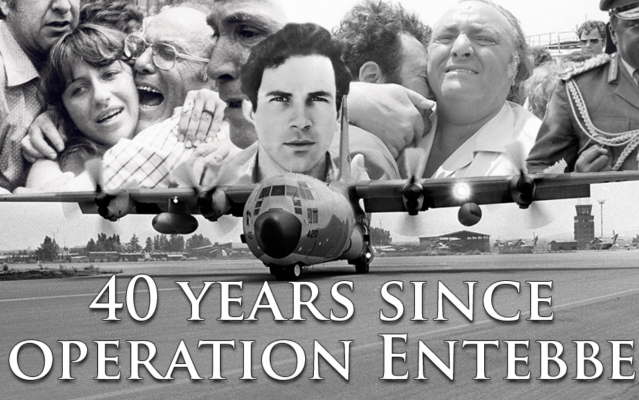 (Mazal Tov! You’ve already doubled the usual wish of “until 120”

…it is also the 40th anniversary of an equally auspicious day – the miraculous rescue by IDF special forces of over 100 Jewish hostages held by German and Palestinian terrorists in Entebbe, after their Air France airplane was hijacked on its way from France to Tel Aviv.

Here is one documentary amongst many others which describes the events, including interviews with the actual participants:

The official memorial site of Col. Yoni Netanyahu has published the record of the last few days of the hero’s life, from the lead-up to the hijacking, through the deliberations in the cabinet and the army brass, and up to the rescue itself, and Yoni’s falling in battle. For all the dry facts it is very dramatic reading. 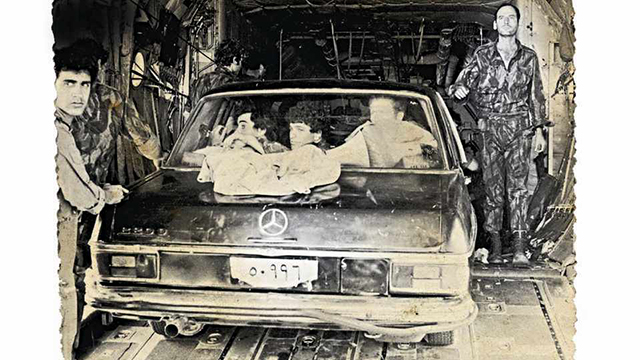 Commandos from Sayeret Matkal with the Mercedes they used to deceive the Ugandans (Photo: IDF Spokesman)

Ynet has a commemorative article about Operation Entebbe as told by the commanders themselves. This paragraph, describing the stunned shock and elated surprise of the hostages – and of the whole Jewish nation – stood out for me:

“I looked at the hostages, and they were all in shock. They were lying on mattresses, parents holding tightly onto their children, protecting them with their own bodies. Amir and I walked around them with a megaphone. ‘We’re soldiers from Israel,’ we told them—Amir in Hebrew and I in English, ‘We’ve come to take you home.’ They looked at us with shock. Only a few moments ago, they were in a different world, in hell, not knowing what was going to happen, whether they are going to live in an hour or be executed. They certainly could not imagine that there was a chance that the IDF would come and rescue them. And now, it was as if a hand from the heavens was sent for them and plucked them from one world into another. 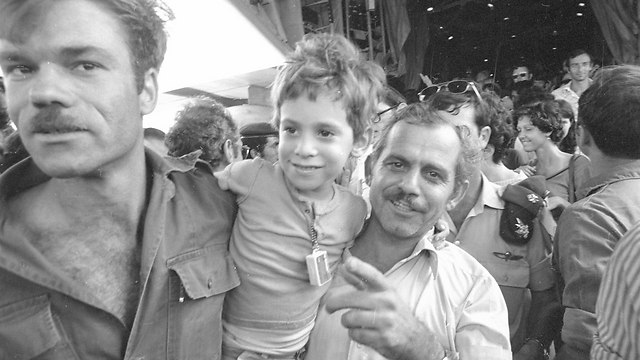 Two of the hostages, Baruch Gross and his son Shai, upon their return home (Photo: Avi Simchoni and Micky Tzarfati)

Cover of @Jerusalem_Post the day after Entebbe hostage rescue (Operation Thunderbolt), which was 40 yrs ago today pic.twitter.com/1twrBBYExn

Herb Keinon in the Jerusalem Post looks at the operation from another angle. It was the portentous event that set Binyamin Netanyahu on his trajectory into politics:

The prime minister was 26 at the time of his brother’s death, and was employed at the Boston Consulting Group, having recently graduated from MIT with degrees in architecture and business management.

He was then unknown to the Israeli public. Yes, he too was a veteran of the elite Sayeret Matkal unit that carried out the operation, but he was not involved in it. After the raid he returned to Israel to establish an anti-terrorism institute in his brother’s name, the Jonathan Institute, that catapulted him into the media limelight, and then into politics.

“I thought I would be either in the academic world or the business world,” he said in an e-mail exchange with Newsweek‘s Dan Ephron in 2012, on the occasion of a film that came out at the time on his brother, “Follow Me: The Yoni Netanyahu Story.”

“My brother’s death changed my life and directed it to its present course.” He said that the events of July 4, 1976 did not shape his worldview, but rather “reaffirmed it.”

In the film the prime minister remembers how he was the one who had to break the news of his brother’s death to his parent’s, driving six hours from Boston to Philadelphia to do so. When his father saw him, he asked,”Bibi, what are you doing here?” 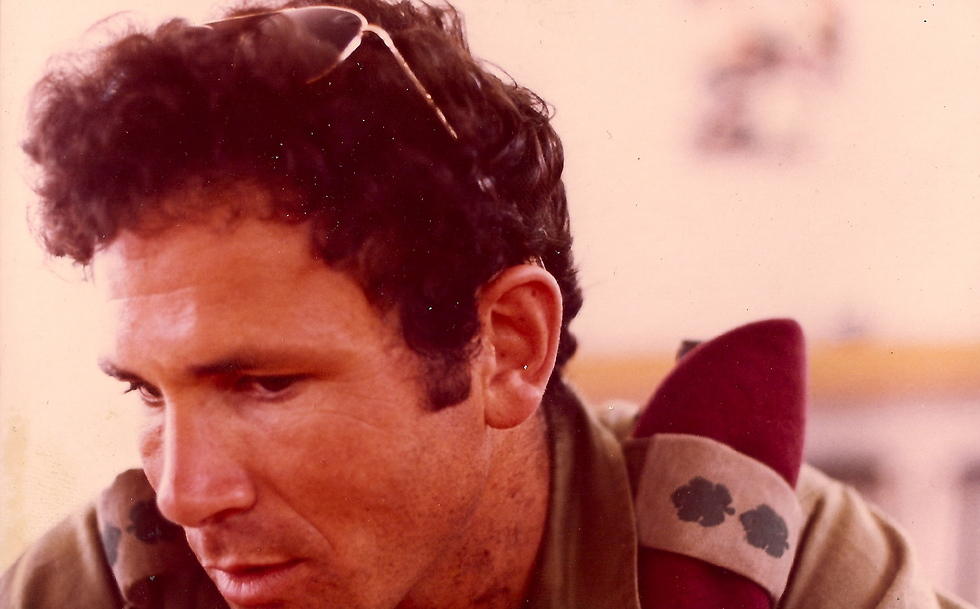 “And then his expression changed,” Netanyahu remembered in the film, “and he understood immediately. And my mother let out a terrible scream. I’ll never forget that. It was actually worse than hearing about Yoni’s death.”

“It is painful and debilitating. It is as if a limb of your body has been cut off,” he said. The loss is with him all the time, he told The Jerusalem Post‘s Elli Wohlgelernter in a 2001 interview marking 25 years to Entebbe.

Netanyahu said candidly that the public work he became engaged in after his brother’s death set his life on its current trajectory.

“From this activity, I ended up in diplomacy, and from diplomacy I got into politics. So you might say that Yoni’s death triggered the process by which I ultimately ended up in politics, although I didn’t have that intention consciously at the time.”

The article’s concluding paragraphs are of huge relevance to last week’s events:

“I think that his death at Entebbe marked a unique turning point in the world’s battle against terrorism,” Netanyahu said, “because after Entebbe, it was very difficult to argue that you had no choice but to surrender to terrorism. His death triggered a great cataclysm in all our lives, the lives of the family, but in the sense of a re-dedication, in my case it was primarily to advance the battle against terrorism.”

Yes, the battle against terrorism and Arab rejectionism still rages, but what a difference 4 decades make! In those days the Prime Minister Yitzchak Rabin took an enormously brave decision. In 1982, Prime Minister Menachem Begin similarly took a very risky decision to bomb the nuclear reactor in Iraq. Would our current leadership, even Binyamin Netanyahu himself, have the same courage and nerves of steel to carry through a similar rescue?

With the government’s limp response to the latest Palestinian terrorist outrages in Israel, one can’t help but wonder.

From yet another viewpoint Tablet Magazine elucidates 10 things we probably didn’t know about the Entebbe rescue. Here are a couple of those items:

In fact, four hostages did not survive the rescue attempt. Jean-Jacques Mimouni was killed when he jumped up during the rescue and was shot by a rescuing soldier. Pasco Cohen was shot in the pelvis by Israeli fire and died on the operating table in Nairobi. Ida Boruchovich was shot dead during the rescue but it is less clear whose bullet—Israeli or Arab—took her life.

The best known casualty was Dora Bloch, who began to choke on what has been variously described as a piece of meat or a chicken bone on Friday, July 2. She was taken to the hospital in Kampala for treatment. Saul Rubin documents how Idi Amin called Health Minister Henry Kyemba on Saturday to see how Mrs. Bloch was doing, with an eye towards returning her to the others. Kyemba, hoping to spare her what was looking more and more like a bitter fate with her countrymen, lied, saying that she needed another day for her recovery. By the time that day had elapsed, the rescue had taken place without her. In retribution, Idi Amin had her taken from her bed and shot.

Who was Surin Hershko and what unsung part of the rescue does he play to this day?

Hershko was tasked with checking other rooms in the terminal for hijackers and Ugandan soldiers. He suddenly encountered two soldiers on a staircase. One shot him twice and a bullet struck him in the neck, severing his spinal cord and rendering him a quadriplegic. In 2001, the twenty-fifth anniversary of the raid, Prime Minister Ariel Sharon awarded him a special medal.

Meanwhile Binyamin Netanyahu is heading out today to Africa, back to the “scene of the crime” in Entebbe, but also visiting other countries, including Kenya, whose assistance at the time of the raid proved invaluable to Israel.

Jomo Kenyatta was the “architect of the friendship between Israel and Kenya,” Netanyahu said in February during Uhuru’s first visit to Jerusalem. “He demonstrated that friendship most dramatically 40 years ago in helping Israel in the raid in Entebbe to rescue our hostages. This is something that has left a deep imprint on Israel. The people of Israel are grateful for that. And I’m personally grateful for that.”

The Entebbe raid was a turning point for Israel in its fight against Arab terrorism and against the Arab enemy in general. There have been no more open wars, or even attempts at such hijackings against Israeli targets since then. Instead the battle has moved on to “local” terrorism and, most egregious of all, to defamation, delegitimization, and from there it’s just a short step to BDS.

They are all intended to destroy Israel one way or another. We have to stand firm and united. Let us hope that our leaders can produce the same courage and strong nerves in the face of international opposition as the giants of previous generations once did.

Even upstaged our bicentennial. I always thought that Ford should have mentioned it in his speech. Free people being free to take care of business.

That was a wonderful day and I remember my feelings of awe and respect for Israel that day. They are what we once were. We had just recently abandoned Vietnam and our national pride had taken a beating. It was satisfying to know others still had the courage and resolve to fight evil.I have heard the Israeli government tracked down and “took care of” all those involved in the Olympic murders of 1972.

I’m acquainted with one of the IDF soldiers who participated in the rescue operation. It was an amazing and audacious feat, one that still awes.

There were three components requiring respect. The decision to go was gutsy. Putting the thing together out of twigs and straw in no time at all was an enormous feat. The ground op was pretty much standard Infantry work. You had to have guts to get on the airplane, but once you got off, you were doing what grunts have done since forever.

The Entebbe rescue was the best 200th birthday present Israel could have given us. It reminded us that we are not the pawns of a hostile world, but that free people can defend themselves and strike back.

It is a lesson we have forgotten, and need to learn again.