Was no one else available?

The White House held a State of Women Summit this week and for some reason, chose Vice President Joe Biden to represent the Obama administration at the event.

Joe Biden isn’t guilty of any crimes against women but he does have a demonstrable habit of being a little too intimate with ladies.

Wired has a report on the summit:

VP Biden: Changing Rape Culture Will Take All of Us

Biden, speaking today at the White House State of Women Summit, made two things abundantly clear: violence against women is an epidemic, and the country is a long, long way from eradicating it.

That much is obvious to anyone online this month as a powerful letter written by a rape survivor went viral. The letter lays out in stony detail everything the woman knows and feels about the crime committed against her. It inspired a deluge of posts on social media, with people voicing support for the woman and condemning the judge who sentenced her rapist to six months in jail, arguing that prison would too adversely impact his life.

Biden was among those who lent support to the survivor, who remains anonymous. In his own viral open letter, the vice president told the woman, “I do not know your name — but I know that a lot of people failed you that terrible January night and in the months that followed.”

He reinforced that message today. “Those of us who find this action reprehensible, the talk reprehensible, you have to be heard,” he said. “You are the ones who are going to impact the change in the culture.”

Here’s a clip of Biden using a weird and creepy hypothetical example of a nude woman walking into the U.S. Capitol for some reason:

“No man has a right to touch her.”

We agree, Mr. Vice President. Perhaps you should take your own advice.

Here’s a flashback from the Washington Examiner:

Vice President Joe Biden left some observers in and out of Washington aghast with his whisper-in-ear embrace of new Secretary of Defense Ashton Carter’s wife Stephanie at Carter’s swearing-in Tuesday. As Carter was delivering his first speech as Pentagon chief, Biden, standing in the background, put his arms on Stephanie Carter’s shoulders and his face to her ear, apparently telling her something in what could reasonably be interpreted as an intimate embrace. A still image of the gesture shot around the social media world: 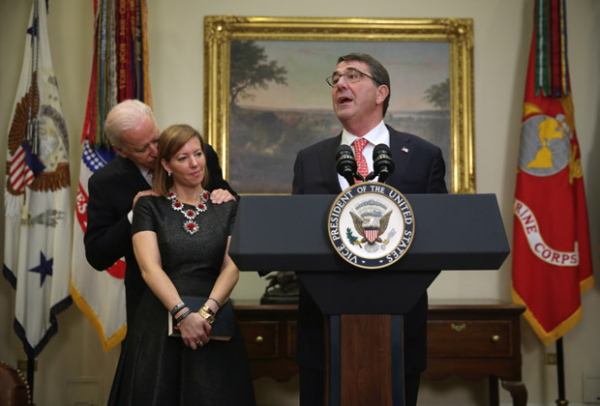 Biden’s behavior at the Carter ceremony follows his hands-on performance at the swearing-in of new senators in January. The vice president’s performance on that day brought comment from around the world, ranging from “Biden being Biden” to “handsy Joe” to “creepy.”

The Senate swearing-in followed various times in the past in which Biden has been particularly affectionate with women in business and social situations, like the 2013 Christmas party at which he embraced reporter Amie Parnes. 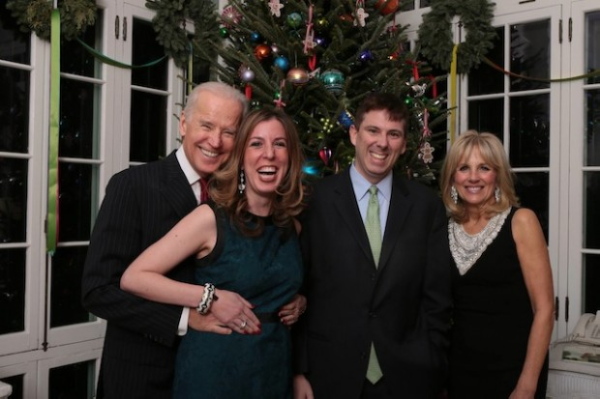 Featured image is a screen cap from the Washington Examiner.

“Gropey” Joe is a facile liar. That’s why they used him.

He’s reliably going to mouth the narrative’s fundamental, counterfactual lie that there is an “epidemic” of rape. The truth is that rape has been declining for years, although that may be changing now with the increase in violent crimes under the “Ferguson effect”.

“Heckuva job, Berry”… As effective in “The War On Wimmins” as every other war on his watch.

If you go where the girls hang out at Reddit (not a large number of subreddits, granted), you will find lots of hypersensitive SJWs who think the United States is a “rape culture,” and who think that their inability to say “No,” much less make a “No” stick, is not their own fault.

Somebody has been teaching these children some very pernicious lessons in learned helplessness.

Seriously, some of them think that, instead of teaching girls to avoid such dangers as excessive intoxication and going home with strangers, and how to defend themselves, we are to teach young men more about boundaries and respect.

They reject the concept that we should be doing all of the above. They want to be able to reliably place their personal safety in the hands of strangers.

Well, when there is no one with any good ideas and there is an agenda to push, out marches the parade of the stupid with the latest set of talking points.

If there is a “rape culture”, it was created through the dysfunctional revolution, including shaming women as mothers, marginalizing women in committed relationships, promoting women as taxable commodities, encourage reproductive prostitution (e.g. surrogates for transgender/homosexuals), and normalizing elective abortion of [wholly innocent] human lives for wealth, pleasure, leisure, and a perverted pro-choice religion.

There is no rape culture in America.

My daughter was raped.
She did not go to a party or imbibe copious amounts of alcohol or partake of any drugs. She was fooled by a man who claimed to be a police detective with a phony badge. He then beat her to a pulp and raped her then shoved her out of the car. She was in the hospital for 3 days and it took a month for the bruises and cuts to heal.
This is a darn sight different than a girl who goes to a frat party and drinks half a bottle of rum, gets so wasted she can even stand up then is assaulted by some scum-bag who couldn’t make it with a girl regular like.
It is different in a major way from some stupid coed who meets some guy, goes to his dorm room, fools around and has sex, then two days later feels guilty and then claims she was raped.
I’d say there is more of a amoral-stupid culture.

Best wishes for your daughter’s continuing recovery. May she have a long and happy life.

It’s so hard to parody this administration any more.

I’ve heard his secret service handle is “Cobra”. Could it have anything to do with his preference for swimming naked in the pool at the VP mansion while under the watchful eye of the secret service?

“But if a young woman stripped down and walked naked down the streets of Chappaqua, New York, in two shakes of a lamb’s tail an elderly gentleman would be on the scene to put her back in chains.”