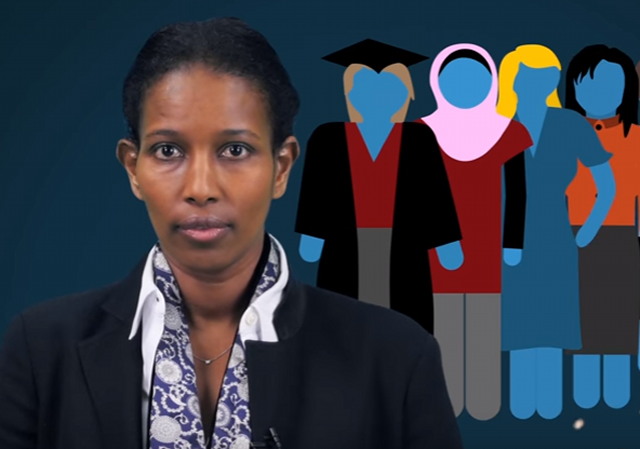 Western feminists are happy to talk about the ever growing threat of the patriarchy and trivial issues like mansplaining, but are often curiously silent about the plight of women in Muslim countries.

Author and activist Ayaan Hirsi Ali has noticed this silence and has a few questions for feminists.

She points out that this issue no longer applies solely to the Middle East since Western countries keep accepting millions of new refugees, mostly from Muslim countries.

She uses as an example, the New Year’s Eve celebration in Cologne this year, where hundreds of women reported being sexually harassed, or even physically assaulted by men who were overwhelmingly from Muslim countries.

Hirsi Ali notes that some feminists have suggested that any attempt to “help” Muslim women is unnecessary and insulting, but suggests that the time for choosing sides is now. She rightly suggests that one side is going to win this cultural war and hopes that freedom is the victor.

Are women oppressed in Muslim countries? What about in Islamic enclaves in the West? Are these places violating or fulfilling the Quran and Islamic law? Ayaan Hirsi Ali, an author and activist who was raised a devout Muslim, describes the human rights crisis of our time, asks why feminists in the West don’t seem to care, and explains why immigration to the West from the Middle East means this issue matters more than ever.

American feminists are quick to call themselves victims of male oppression but few if any of them have walked a mile in Hirsi Ali’s shoes. Until they do, they would be wise to listen to her.

“…why feminists in the West don’t seem to care…”

Because they actually don’t care. Leftists simply use people and groups of people to push the leftist narrative. Muslim women have no political use for a leftist. They do not see these Muslim women as human beings. They see them as an abstract group to be used/exploited or ignored (who cares?).

I could not have said it better myself.

I agree with you almost completely but I would offer that Muslim women do have political value: they are a hammer that the Left uses to smash their enemies – Conservative Christians – against the anvil of Political Correctness.

Notice that any mention of the lefts silence is immediately and loudly met with their evergreen response: “RACIST!” (although I am still trying to understand how and when being a Muslim became a race)

True. Feminism is about hating the West in general, and the US in particular. It’s about teaching spoiled Oberlin undergrads that they live in thee most oppressive patriarchy the world has ever known, with the most toxic rape culture on earth.

And the only cure is socialism.

Feminists have to keep these idiots stupid about Islam and how unimaginably horrible Muslim women have it, and their pampered lives aren’t even in the same universe, or they can’t maintain the fiction that microaggressions or paying for their own tampons/birth control are the worst things women have had to endure in all of human history.

So Ayaan Hirsi Ali must not be allowed to speak on campus.

At the end she describes herself as being “of Harvard University.” Is she a professor? If so, good for Harvard. I’m surprised the PC crowd would let her anywhere near Harvard. PS: I hope this woman packs heat 24/7.

Current-wave “feminists” are crazy, mean, and Marxist. They are the least tied to reality of any group in the U.S., IMNHO, and outright, indefatigable haters of all things male.

They are much too enveloped in their own hatreds and victim signalling, along with lesbianism, to have any awareness of, much less concern for, anything in reality…especially Muslim women and men.

…and could lead to their own deaths at the hands of islamists.

Which is the real reason they keep silent. They feel comfortable bashing their white patriarchal male oppressors because they know they aren’t at risk of (literally) losing their heads.

Let me compare with the number of times a recent Pope has ordered someone killed because they spoke up in favor of priests being permitted to marry or women to become deacons in the church.

It’s quite simple, same reason Feminists support Bill and Hillary Clinton. They have no honor.