The slums have realized that socialism isn’t all that wonderful… 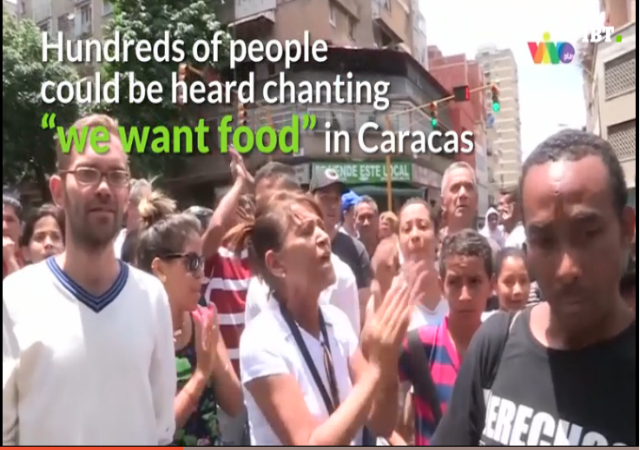 The biggest supporters of Venezuelan President Nicolás Maduro’s programs have turned against him since they now suffer from the food shortages affecting the rest of the country.

Party officials stressed to The London Times that Maduro’s distribution system has “broken down and that conditions are ripe for civil war.” He hoped the system would end the long lines “and black marketeers at state-subsidised supermarkets.” Riots have exploded in these areas:

What is striking is that the riots — sometimes half a dozen a day in the capital — are in working-class slums far from the middle-class areas where support for the opposition has traditionally been strongest. The opposition, which controls congress, is trying to push through a referendum to remove Mr Maduro but that will take time and hungry people are more concerned about procuring food.

To put an end to the vast queues and black marketeers the government recently started distributing food directly to local community councils.

In an area of Antímano, one of the largest slums, a council spokeswoman said that the first delivery was supposed to arrive in April but only half of it arrived. To avoid riots — and accusations that it had stolen the missing food bags — the council did not give out any supplies. Last month none arrived. This month’s supply has still not come and now there is no food in the supermarkets either.

One council member told the Times that food delivery trucks cannot reach their destination because “people follow them and loot them.” The member, who did not want the publication to identify them, said “[T]here’s a danger of civil war here.”

Maduro took over private food companies, but the government does not have the resources to make everything work. Only Polar Enterprises remains, but if Maduro snatches that, his country will run out of the small amount of food they have.

In Catia, residents lined up for hours just to receive small packets of flour. The government quickly ran out, which led to riots against the “police with riot shields and national guardsmen with rifles as members of government-run armed gangs known as colectivos:”

Veronica Gonzales, 46, a computer technician, said that police and the colectivos were in league with black marketeers known as bachaqueros, or leaf-cutter ants, who queue at shops and then sell the produce at inflated prices. “They are all a mafia,” she said.

At least three people have died in riots in the past week:

All three suffered gunshot wounds during chaotic scenes outside supermarkets, which have become a flashpoint for violence and looting amid scarcities of basics across the South American OPEC member country, according to local rights group Provea.

The Venezuelan Observatory of Violence says people commit 10 lootings every day and that “a quarter of the 641 protests last month were for food.” At one riot a woman fainted due to the summer heat while an elderly woman cried on the sidewalk.

Robert Arcila said people are “looting because they’re hungry.” One protester screamed for any kind of food, “[E]xpensive, cheap, imported, whatever.” An anonymous woman told AFP that as parent, the people will do anything to feed and provide for their family.

They should look at the bright side… when you run out of food it’s not such a big deal that you previously ran out of toilet paper.

Ain’t central planning of the economy by the ‘best and brightest’ just grand?

It won’t be viewed as socialism’s fault so much as the Satan of the World, the US, deliberately trying to destroy the Venezuelan experiment.

“The clock of communism has stopped striking. But its concrete building has not yet come crashing down. For that reason, instead of freeing ourselves, we must try to save ourselves from being crushed by its rubble.” – Aleksandr Solzhenitsyn

For Venezuela, if there’s an exit strategy from this crisis, it sure isn’t obvious. Maduro could drop dead this afternoon and a sorceress could turn all his military and police into harmless swine, but the populace would still sit there starving, stranded in a wasteland of financial chaos. Anyone trying to get some small commercial ventures going will immediately be swamped by mobs and robbed blind. Outside intervention could work, but I don’t see that happening this time.

If the people have no food, then let them eat pastels! Communists really are so generous. They’ll give you the shirt right off of somebody else’s back. That is until there are no more shirts to go around.