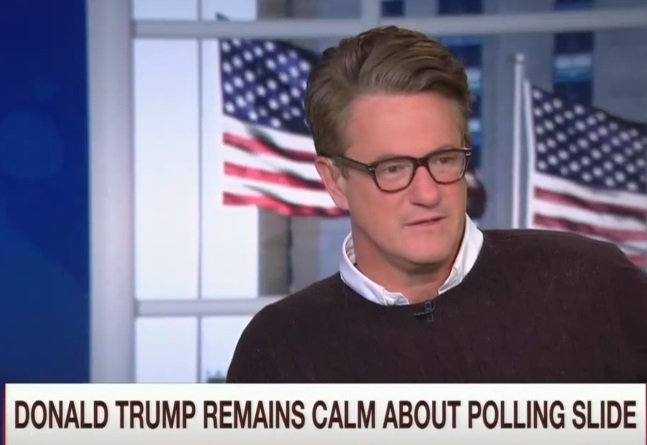 In 1964, Republican Barry Goldwater suffered a devastating landslide loss to LBJ. Aside from his home state of Arizona, Goldwater carried only five other states, all in the Deep South. Goldwater amassed only 52 electoral votes, to Johnson’s 486.

But even that paltry performance will look “extremely successful” compared to the thrashing that is in store for Donald Trump in November — if you believe Joe Scarborough. On today’s Morning Joe, after reviewing Trump’s disapproval numbers with various demographics, Scarborough said “Barry Goldwater is going to look like an extremely successful candidate.” Interestingly, Nick Confessore of the New York Times disagreed, arguing that the American electorate is so polarized that LBJ-like landslides are impossible today, and that the candidate of either party has a guaranteed base of 48%.

Let’s look at the electoral map. In order for Scarborough to be right, Trump would have to lose some of the Deep South states that Goldwater carried. So which of Louisiana, Mississippi, Alabama, Georgia and South Carolina does Joe say Hillary will win? And even if Hillary did manage to take, say, Georgia, is Scarborough saying that Trump won’t win any states that Goldwater lost? Hillary will win each of Texas, Oklahoma, Kansas, Nebraska, Idaho, Utah, Wyoming, Alaska, etc? Really?

JOE SCARBOROUGH: The thing is, Nick, you just look at the numbers right now. I’m loved with Hispanics: 89% of Hispanics disapprove of him. The blacks love me, he says. 94% of black voters disapprove of him. Women love me. I’ll be great for women. What is that? Up in the 70s now?

RON FOURNIER: 53% of low-income whites days disapprove of him.

JOE: 53% of low-income whites days disapprove of him. We have never seen numbers like this. Barry Goldwater is going to look like an extremely successful candidate.

NICK CONFESSORE: I don’t think so. I’m probably going to eat these words, but I don’t think a Goldwater-type landslide is possible in politics today. Americans are too polarized and segmented.

CONFESSORE: I’m just saying people are polarized by party and party ideas so strong in this country right now, that at the end everybody kind of comes home to some extent. And the amount of voters in the middle that go back and forth has become so small. I think any candidate for a ticket is guaranteed 48% of the vote basically.

Can anyone point to the other bold statements that Joe has made in the past 6 months that were 100% spot on? His credibility is no better or worse than people who are calling for another Reagan landslide in November.

Trump may do well. Or, he may collapse. But voting Dem is not an option. And Repub fidelity to the 2nd Amendment, smaller gov’t, the dangers of illegal immigration and a host of issues is plainly lacking.
So, win or lose, it’s the best shot.

It is just pile on Trump time. The Elites and their politically correct automations are taking their best shots.

I think a big part of this is that Joe is wishing and hoping this comes true, and as part of the MSM he is doing everything he can to put his thumb on the scale.

They are very, very scared right now. Many of the LGBTers are waking up to the bs after this event, and Trump comes out of this thing looking like a sage.

JOE SCARBOROUGH has completely 100% lost any credibility
that he might of had! His rants and raves are insane and out of control. Constant attacks on Trump and the republican party.
I can not watch him for a minute. So in the bag for crooked Hillary it’s stunning.

One more failure on MSNBC! Stick where the sun does not shine Joe!

Is that really Joe or the Madcow woman? It’s hard to tell.

Here’s something interesting to think about: if Trump does lose, these guys predicting utter electoral humiliation will stumble over each other to make nice with Trump after the election, and perhaps willingly humiliate themselves to be contestants on Trump’s Celebrity Apprentice: District of Columbia edition.

Yes, which is why wining or losing is less important to Trump than doing it his way. He is, first and foremost, an entertainer.

In a long term Goldwater won, of course, which is h=why trumpism is dangerous.

A Crooked Clinton supporter chimes in.

I forget. How much better did Trump do in the primaries, compared with early polling?

He was the 35% man up until the almost very end.

Joe Scarburrow has a much better chance of being right, if the Democrat media can keep Hillary hidden away from the public, and just sell the idea of ‘the historical first woman President’. It’s the only thing she has to offer to the voters.

She’s running a commercial pushing the idea that she is “For the Children” and always has been. Problem is that I don’t much remember her being particularly pro-child prior to this. Not to mention her support of Planned Parenthood.

The “for the children” concept is classic Clinton. They ran these constantly in Arkansas during campaigns, only to forget about the children when elected. It also is an indicator that she may be in trouble as they only pull it out as a last resort.

If Joe is correct he can celebrate with all the GOPe politicians, the NEVER TRUMP gang and the media while many Trump supporters will be making sure none of that group will ever get another vote or a dollar from them.

There’s nothing…and no outcome in prospect if T=rump and Hellary are the choices…that any conservative could possibly “celebrate”. Just the opposite.

Probably the Pro Trump people will be in those FEMA camps so they CAN’T support anyone else. Ever.

That’s how bad their ideas are.

Goldwater nothing. Surely Trump can pull a Mondale. That landslide, it’s gonna be yuuge!

And, yes, Scarborough is one of those who played Donald like cheap orange accordion. During primary, it was a lovefest. Now that Trump has been dragged over the finish line, all of a sudden they can’t stand each other.

Scarborough is almost as demented as Rags. Except he doesn’t curse as much and call people nasty names as much.

He’s never really been a conservative. That’s why he fits in so well in the media.

Another ‘echo chamber’ prediction from a liberal mouthpiece in the press.
How many times have they been wrong about Trump’s demise thus far?
Ten? A hundred? A thousand?

Notice in the Examiner article that quotes Rush as saying ” Trump supporters are getting nervous out there” according to a national poll, it doesn’t specify WHICH nat’l poll so we are unable to substantiate his claim. Many 20+ year Rush listeners feel he has betrayed them and have tuned him out. They don’t feel the need to hsve him “interpret” the news for them anymore. This is a prime example.

At this stage I would vote for a spastic gofer if the press was treating him the way they are treating Trump.

A spastic gopher would probably make a better president.

Bernie has asked that you two leave him out of this conversation.

I certainly agree that Trump isn’t off to a very good start, but yhe prediction is ridiculous – there’s no way you can call a landslide this early. The matchup will only really become clear just ahead of the debates which will be in October. And then the debates themselves will always have the potential to shake things up.

For example, if you look at the 2008 polls, Obama’s advantage over McCain ranged from +14 to -4 in the four months or so before the election. His victory was likely but never certain.

Also, everyone should have known that Trump always had a chance due to the similarities to the 2003 California election in which Schwarzenegger, the celebrity candidate, was able to take advantage of a crowded field and unpopular incumbents and lead the polls early on and then almost coast to a win. The fact that pundits were dismissing Trump wasn’t reflective of anything other than they just weren’t doing their job.

Right, better to go with a packaged proven loser like Romney who apparently now represents a handful of “real conservatives”. The vaunted 2014 congress was given a huge mandate and we got RINOS. If Trump is routed, at least we know where we are and can plan accordingly.

The money line “if you believe Joe Scarborough”