The Cold War has woken up after a 25 year slumber. 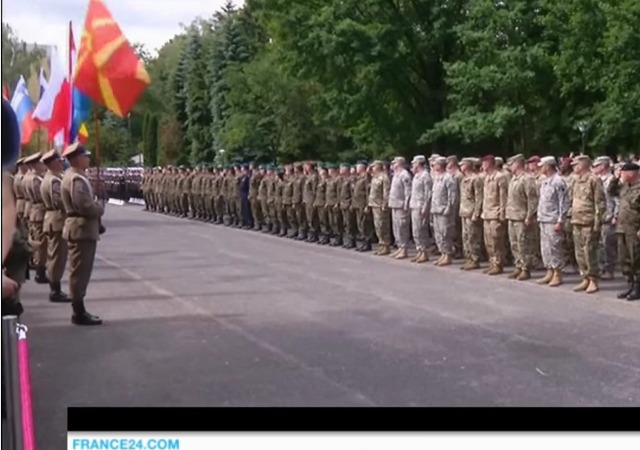 Russia has moved soldiers to their border with Ukraine as NATO launches the largest war games in Eastern Europe since the Cold War went to sleep over 20 years ago.

A Reuters reporter who visited the Russian town of Klintsy, about 50 km (30 miles) from Ukraine, saw a makeshift army camp, large numbers of newly-arrived servicemen and military vehicles.

Two soldiers in camouflage gear who were manning a checkpoint in a forest turned the reporter away, saying they were guarding a “special military site”.

Last year, Reuters also reported on construction of two other bases further to the south on Russia’s border with Ukraine.

The defense ministry has not acknowledged the deployment of troops to Klintsy, which usually serves as a stop for truck drivers traveling between Russia, Ukraine and Belarus.

Mother Russia apparently feels threatened since NATO allies, including non-member Ukraine, have pulled off Anaconda-2016 in Poland. The Kremlin said these drills “do not contribute to an atmosphere of trust and security.” Someone needs to remind the Kremlin that they started this mess in March 2014.

These countries would not feel the need to up their defenses if the Kremlin didn’t invade Ukraine, annex Crimea, and threaten Estonia and Latvia in 2014.

The Reuters reporter witnessed military activity in Klintsy, including trucks and soldiers at a local gas station buying food. The reporter also witnessed these soldiers erecting “a dozen tents and the same number of military vehicles in a temporary camp in a clearing in a forest where the troops will be billeted until their permanent base is ready.” A source close to the situation told Interfax that the activity is “a response to the growing activity of the North Atlantic Alliance near Russia’s border.”

At the same time, over 24 countries have traveled to Poland with 31,000 troops for Anaconda-2016, including Germany. Yes, the Russian threat has prompted Germany to drop its pacifist views and build up its army. German tanks will cross into Poland for the first time since World War II. NATO gave Poland’s Lt. Gen. Marek Tomaszycki control of the operation:

Managed by Poland’s Lt Gen Marek Tomaszycki, the exercise includes 14,000 US troops, 12,000 Polish troops, 800 from Britain and others from non-Nato countries.

Multinational operations publicised so far include an airdrop involving 1,130 parachutists over the northern Polish city of Toruń on Tuesday – including 500 US troops and 230 British ones – engineers building a bridge to carry 300 vehicles over the Vistula river and a night-time “assault” involving 35 helicopters.

Troops from the U.S. Army’s 82nd Airborne Division arrived in Poland to participate in the airborne training operation. They jumped out of “their C-17 Globemasters” into Poland:

“Anytime I can be around paratroopers and know that I get to lead them out, it’s an honor,” Maj. Gen. Richard Clark said minutes after touching the ground. “I would do it again in a heartbeat. It’s in our DNA.”

The 82nd is the Defense Department’s global response force and this exercise was intended to showcase their ability to respond to a crisis situation anywhere in the world on short notice. As part of the Swift Response war games scenario, they were alerted to a “crisis” in Poland just 25 hours prior to their departure.

The exercises take place a month before the NATO summit in Warsaw when the nations will discuss a plan “to position significant number of troops and equipment in Poland and Baltic states.”

The White House also said that President Barack Obama will attend the summit, but added in a “bilateral meeting with Polish President Andrzej Duda to discuss security issues.”

Wow. This exercise could oblige Putin to find something to stroke T-rump about again.

… and others from non-Nato countries.

The non-NATO countries include Sweden and Finland.

Not a trivial detail.

Too bad Obama closed nearly all of our tank storage Army bases in Europe in 2013. I can’t really fault Putin for all the muscle flexing. He’s an opportunist.