Despite this, the state and city promise the games will go off without a problem. 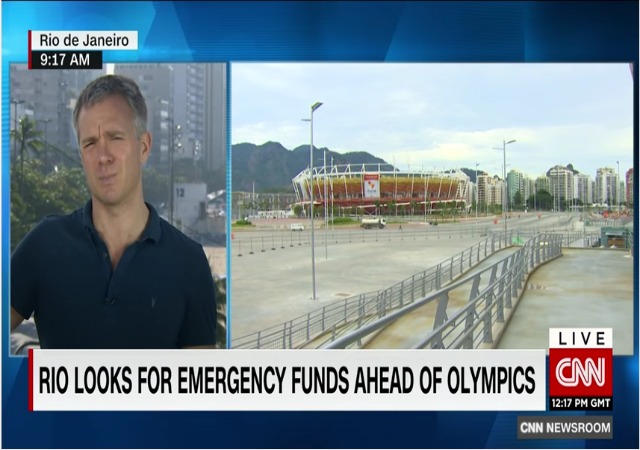 The state of Rio, not the city, continues to topple as the governor declared a “state of public calamity” only 50 days before the 2016 Summer Olympics kick off.

The state spent over $2.8 billion alone “on a 10-mile extension to Rio’s subway to link a series of wealthy beachside neighborhoods in time for the Olympics.” But now they cannot afford to pay for public expenses. Maybe they shouldn’t rely on the government for everything? But I digress. From The Wall Street Journal:

By declaring a state of calamity, interim Gov. Francisco Dornelles authorized his subordinates to adopt “exceptional measures necessary for the rationalization of essential public services” to meet Rio’s commitments for the 2016 Olympic and Paralympic Games.

The move further allows the government to skip the bidding process to hire some contractors and loosens minimum spending requirements on mandatory items like education and health care. An official in Brazil’s Finance Ministry said the decree would also enable Rio to obtain federal resources more quickly.

Rio’s fiscal crisis has become increasingly apparent in recent months. Local news reports have told of hospitals reducing capacity and turning away ailing pregnant women because they weren’t “at risk of death.” Dozens of schools have been occupied by students protesting weeks of canceled classes due to teacher strikes. With violent crime on the rise, Mr. Dornelles met with acting President Michel Temer earlier this week to request help from the military in securing Rio during the Games.

The government did not say exactly how they plan to obtain the money or how much they need.

The country’s Finance Ministry admitted that public spending has gone out of control. The state’s payroll has “more than doubled between 2009 and 2015.”

The oil crisis has caused the majority of problems in Rio since barrels are less than $50. Fitch Ratings pushed Brazil to a B- from a B+. The government cannot provide “pension and salary payments” and have shut down “some schools and hospitals, where crucial supplies, including medicines and syringes, are lacking.”

Debt continues to pile up, forcing the state to cut back on security. With less security and more corruption, the state “has seen a jump in homicides and assaults in recent months.” Rio expects 500,000 people for the Olympics.

The state also cannot “clean up the sewage and other pollution in Guanabara Bay, which will stage the yachting events.” This means those Olympians will have to fight through “plastic bags, human excrement and other waste.”

In February, an Australian doctor said the water in Rio poses more of a threat towards the athletes than the Zika virus:

“If someone gets a nasty gastro infection, vomiting and diarrhea, it’s not ideal for competing in an Olympic environment,” explained Dr. David Hughes. “Rio poses a multitude of medical challenges when it comes to keeping our athletes and officials safe. We have had many teams go to Rio, we are aware of the water quality issues. We have protocols in place to minimize the risk, but you can’t make the risk zero.”

Yes, Brazil is still fighting against the Zika virus, which has links to birth defects. A few athletes and broadcasters have chosen to skip the Olympics because of the virus.

They’ll be knocking on our door with an outstretched palm any day now.

This is a good example of a banana republic getting in touch with its inner chimp. I think it’s called self-cannibalization.

If he was such a great man he would already be there.

Another socialist utopia about to go down the tubes. The left is still in denial.

Having the Olympics in RIo was supposed to be a showcase for the new socialism, sort of like China’s was for one-party authoritarian rule. If it had happened a few years ago, it might have been an effective one. But right now the economy’s in recession / depression, the President’s being impeached for mismanaging funds related to the state oil company, etc.

The good news for Brazil and Latin America is they might finally be on the right track – if Brazil can kick out their leftists, maybe Venezuela can too, and the post-9/11 experiment with “new socialism” will be over with just Cuba’s collapse remaining.