The Scots in Aberdeen still hate the Donald! 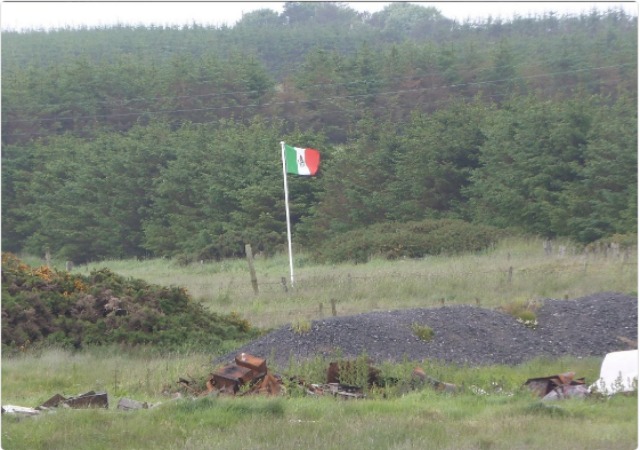 Yes, the residents around Trump’s Aberdeenshire golf course have raised the flag to “show solidarity” with the country since Trump wants to build a wall on the U.S.-Mexico border. The Donald ticked off these people when he built his golf course because he wanted to buy their lands.

David Milne raised one of the Mexican flags:

Mr Milne said: “I am currently flying a Mexican flag along with my usual Saltire just for solidarity along with those worldwide who Trump has decried, insulted and threatened over the years, and will continue to decry, insult and threaten.”

Someone has raised the Mexican flag on the border of Trump's wildly unpopular golf course near Aberdeen: pic.twitter.com/mXzkQeCpic

Michael Forbes pulled up one of the flags. He gained fame in 2012 when he refused to sell his property to Trump for the golf course. Forbes captured the “Top Scot prize in a public vote for the whisky brand’s Sprit of Scotland award” that year.

Mexican flags raised around Donald Trump golf course – ahead of his visit to Scotland https://t.co/06pItLmVXi pic.twitter.com/rMUhzqj1cB

People around the course “say they have repeatedly lost power and water supplies during the development of Trump’s golf course, and Milne’s house has been surrounded by a wall of earth several metres high in attempt to block the view of it from Trump’s clubhouse.”

“We wanted to point out that while he seems to think he can say what he likes in one place and not hear about it elsewhere, he is wrong. If he insults someone in the States, it doesn’t mean we don’t hear about it here. We wanted to show solidarity but we don’t think he is worth doing anything more.”

Trump has called the Trump International Golf Links “one of his greatest achievements.” He also credits the battles he went through to build it for his presidential candidacy. The residents and environmental campaigners tried to stop him, but the government approved his course after a planning inquiry.

How about we send him some of our illegal Mexicans and he can host them?

It isn’t illegal to fly the Mexican flag in Scotland. Or in the US for that matter. Big nothingberger. They are allowed their opinion. Fortunately they can’t vote here.

From the photo, the place kinda does look like a pigsty.

Not that there’s anything wrong with that …

This is the modern equivalent of hoisting the kilt…!!!

I’ve often wondered where people get these flags they fly in protest. Is there a “flag store” in Aberdeen?

You can get a very nice Confederate flag from various foreign devils.

You can get a very nice Confederate flag from various foreign devils.

I already have one, thanks, but my question still stands: Where does one buy the flag of a foreign country on short notice? For example, where do Palestinians or Iranians obtain American flags to burn? Where do the illegals in Los Angeles get all the Mexican flags (and pay for them)? It’s almost like these “protests” are orchestrated and paid for in advance. /sarc

Big Government and Trump against the will of the people. typical.

What do you expect from a bunch of people that shove tube up a cat’s bum, blow in and call the resulting caterwalling “music”?

I just watched the new DVD of “The Brother’s Grimsby” yesterday. They give Donald Trump AIDS in the movie.

I think they legit hate him over there.

He might as well put up an ISIS flag too.